Things to Do in NYC: BlacKKKlansman with Spike Lee

As The Metrograph says, “Spike Lee’s been so good for so long that it’s easy to take him for granted.” So they’re giving the groundbreaking director a six-film retrospective from Nov. 30-Dec. 3, with the highlight being a screening of his most recent hit BlacKKKlansman, about a Colorado Spring Police detective Ron Stallworth (John David Washington) infiltrating the Ku Klux Klan, with an in-person extended introduction by Spike Lee (Dec. 2, 7 p.m.). Another is Summer of Sam on Dec. 5 with a Q&A featuring stars Michael Imperioli and Victor Colicchio. 7 Ludlow St., $15, metrograph.com

Things to Do in NYC: Industry City goes full Christmas

Things to Do in NYC: The past and future of photography

This month’s Library After Hours is all about the art of photography — because libraries know we live in a visual world. The New York Public Library’s after-hours party presents Picture This, turning the clock back to the 1840s for a night of art, science and learning, plus crafts, talks, an illustration workshop, an Instagram challenge and more. Nov. 30, $15 priority tickets with entry at 7 p.m., pay what you wish after 8 p.m., Stephen A. Schwarzman Building, 476 Fifth Ave, showclix.com

Things to Do in NYC: An Asylum worth getting locked up in

New York has a new comedy club, and it’s ready for its big debut. Boston’s renowned comedy shop Improv Asylum, which fuses sketch comedy with improvised scenes — think of it as a cross between Whose Line is it Anyway? and Saturday Night Live — landed in Chelsea in early November, but they’re making it official this weekend. Shows are 90 minutes and currently only on Friday and Saturday nights at 7:30 p.m. — no two are alike, since the shows are totally interactive. This Friday, catch celebrity guest Sonja Morgan. 307 W. 26th St., improvasylum.com

Things to Do in NYC: Cats and dogs take over

Our pets change our lives as much as we change theirs, and the annual nationally touring Cat Film Festival (Dec. 1) and Dog Film Festival (Dec. 2) celebrate that special bond with two days of feature films and shorts featuring stories that are clever, heartfelt, real life, animated and more. Lovingly curated by The Radio Pet Lady Network’s Tracie Hotchner, each day features two blocks of films at the SVA Theater — pick one and get ready for the feels. catfilmfestival.com, dogfilmfestival.com

Things to Do in NYC: Be consumed by love

What is the nature of love, and what forms does it take? A new site-specific play Consumption explores the notion as Devin Burnam and Tracy Weller of Mason Holdings theater company take an audience of just 30 through the 90-minute drama. The lives of five disparate couples intertwine across time, space and even realities across several rooms of Brooklyn’s 100-year-old Beverly Social Club. Through Dec. 8, 1016 Beverley Rd., Ditmas Park, $25, mason.holdings

Things to Do in NYC: Christmas comes to Queens

Things to Do in NYC: Ordinary New Yorkers get their own fashion show

Libraries are the free stores of knowledge, but the Brooklyn Public Library wanted to take it a step further with an event celebrating freedom of expression, too. This Saturday, they’ve invited any New Yorker who wants to show what they’ve got to walk the catwalk at the first-ever People’s Ball. Unlike exclusive galas, this red carpet is open to everyone, with professional photographers capturing the action all night; local musicians and DJs will entertain the crowd, plus food and drink specials. Dec. 1, 7 p.m.-midnight, 10 Grand Army Plaza, free, bklynlibrary.org

Things to Do in NYC: Meet Santa in the park

The flowers may not be blooming but the fun hasn’t stopped at the Queens Botanical Garden. The annual Christmas in the Garden celebration kicks off a whole festive month of themed activities with a day of performances by The Rough Dozen Acapella, photos with Santa ($10-$15), free holiday crafts and caroling, all ending in the tree lighting. Dec. 2, noon-5:30 p.m., 43-50 Main St., Queens, queensbotanical.org

Things to Do in NYC: Wreck-It-Ralph pajama party

Watch the adorable sequel to Wreck-It-Ralph at special brunch screening. Alamo Drafthouse is providing the all-you-can-eat cereal bar — you show up in your pajamas ready to watch the movie and work on raising your seasonal sugar tolerance. Dec. 2, 9 a.m., 445 Albee Square W., Brooklyn, drafthouse.com

Things to Do in NYC: Free latkes!

Beginning on the first night of Hannukah, the first 100 customers at Katz’s Delicatessen in DeKalb Market Hall starting at 6 p.m. will get a free latke with their purchase. The food hall will also have live music, dreidel-making, a puppet show, dancing and more family-friendly entertainment this Sunday from 2-5 p.m. Dec. 2-10, City Point, 445 Albee Square W., Brooklyn, katzsdelicatessen.com

Christmas doesn’t get to claim all of December. First comes the Jewish holiday of Hannukah, and to celebrate Chabad of Park Slope will once again light Brooklyn’s largest menorah on Grand Army Plaza. The rabbi ascends by cherry-picker to the giant menorah to place a lantern once every eight nights, but you’ll want to be there for the first night (Dec. 2) for live music, free latkes and small gifts for children, plus street vendors and other fun. largestmenorah.com

Things to do in NYC: Ongoing 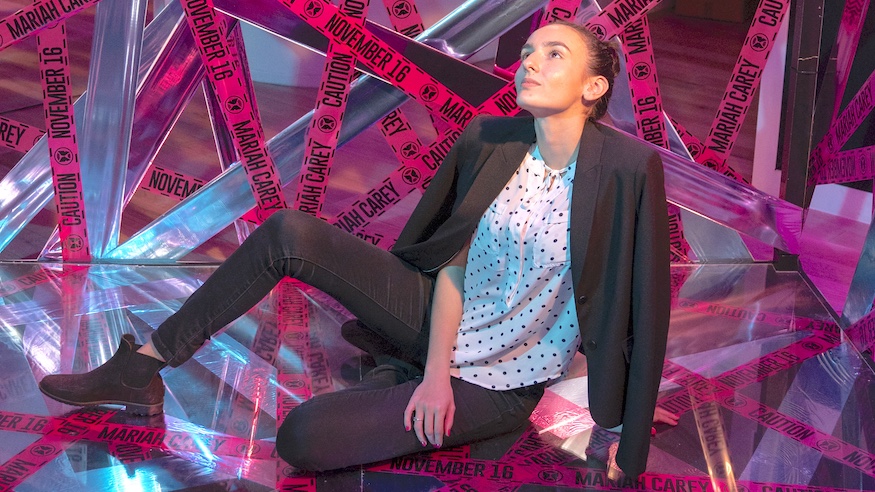 Live the Fantasy at Sony Square NYC’s pop-up gallery dedicated to the Queen of Christmas. The Mariah Carey Experience recreated some of the pop diva’s most famous album covers, from 1997’s Butterfly to her just-released album Caution, plus a Christmas GIF station and merchandise. Nov. 24-Dec. 4, 25 Madison Ave., free, sony.com