9 creepy dolls and dummies of the big and small screen 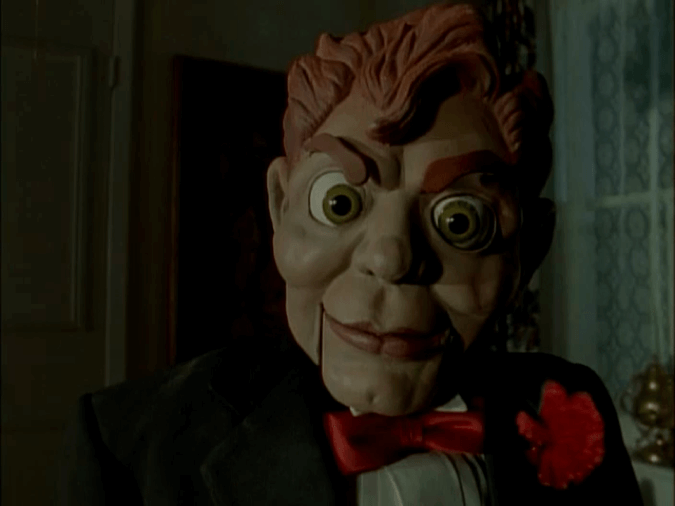 Viewers, beware, you’re in for a scare.

Sony Pictures has officially released the trailer for the upcoming “Goosebumps” movie, though fans of all ages (read: nostalgic twenty-somethings) have to wait till October to see it. Based on author R.L. Stine’s wildly popular book and television series, it will follow Zach (Dylan Minnette) and his next-door neighbor Hannah (Odeya Rush), along with Hannah’s famous dad R.L. Stine (Jack Black), as they attempt to capture the spine chilling “Goosebumps” characters accidentally set free from Stine’s books.

Longtime fans of the series are sure to be thrilled for the big screen version of Slappy the Dummy, a possessed ventriloquist’s dummy who is one of Stine’s most popular — and feared — “Goosebumps” characters. In honor of the source of many childhood nightmares returning, we’ve rounded up nine of the scariest doll and dummies on TV and in movies.

In the 1963 episode “Living Doll,” Talky Tina is an evil doll that threatens to kill a man (Telly Savalas) should he be rude to her. Every attempt to rid his house of Tina proves futile, and Tina’s revenge later proves fatal. With the show’s cult status, Talky Tina became a pop culture icon in the decades following the episode. Replicated dolls and parody episodes were created, all with portrayals just as creepy as the original.

Chucky the doll was anything but a Good Guy in this six movie horror franchise. The series follows a voodoo practicing serial killer after he transfers his soul into a Chucky the Good Guy doll and begins killing families in search of a new host body. The “Child’s Play” movies, notably the first three, are considered classics in the horror film genre. Series writer and creator Don Mancini announced in February that he was currently working on the seventh movie.

Fats the Dummy wastes no time convincing his owner Corky (Anthony Hopkins, who also voices the doll) to begin killing others in Richard Attenborough’s psychological horror film. Once the timid Corky begins to refuse, Fats becomes increasingly domineering and takes over the killings himself. His startling appearance is paired with a comedic attitude, though that wasn’t enough to keep parents from claiming the trailer would give their kids nightmares. It was eventually pulled from TV.

This dummy’s first appearance as Willie in the 1962 episode “The Dummy” was so hair-raising, he was used again as Caesar in the 1964 episode “Caesar and Me.” The extreme close ups and shrill music associated with Willie (voiced by Cliff Robertson), however, arguably makes “The Dummy” the creepier episode. While Willie has a fairly tame look, it’s his increasingly high-pitched cackle and his constant ominous silhouette that caused spines to shiver.

Based on a haunted Raggedy Ann doll that terrorized a nursing student in the 1970s, the Annabelle doll quickly spooked audiences with her fixed glare and eerie smile. Although she never walked around on camera, she is seen rocking in chairs, leaving notes for her owners, moving from room to room and doing other actions a doll shouldn’t be able to do. The real Annabelle is on display in the Warren Occult Museum in Monroe, Connecticut and is blessed twice a month by priest.

Slappy the Dummy
The ‘Goosebumps’ franchise

The “Goosebumps” movie’s main antagonist, Slappy, made his first appearance in the book “Night of the Living Dummy.” Made from the wood of a coffin by a sorcerer, Slappy comes to life when a spell is said aloud and seeks a slave to do his bidding. Although a sillier villain, Slappy has remained one of Stine’s most popular “Goosebumps” characters. His portrayal in the “Goosebumps” TV series led to the creation of Slappy dummies, Halloween costumes and plenty of nightmares.

This dummy’s piercing green eyes and vacant, but frightening, stare is forever immortalized on the movie’s official poster. Billy is the favored dummy of a ventriloquist who returns from the dead and begins killing those who encounter her. While “Dead Silence” is full of dolls with shape-shifting faces that rock in chairs in the shadows, Billy is the scariest of the bunch, most notably in his alarming opening sequence and first attack.

Billy has all of the makings of a nightmare-inducing dummy: sunken red eyes, a low gravely speaking voice and a tricycle that makes a chilling squeak as he rides. Although he isn’t the mastermind behind the torturous killings in the “Saw” films, Billy acts as the man’s mouthpiece. He narrates the rules to escaping survival “games” when his victims come to and watches as they scramble to stay alive.

Hugo was one of the earliest portrayals of a dummy come to life in “The Ventriloquist’s Dummy,” the final segment of this British horror anthology. He proves to be a lot more cunning than his owner Maxwell (Michael Redgrave), threatening to leave the act to send the man over the edge with jealousy. The real horror of Hugo, however, comes at the film’s twist ending. It’s an act that’s kept Hugo and “The Ventriloquist’s Dummy” the most well known of the anthology.

Check out the trailer for “Goosebumps” below, in theaters October 16.