The hottest tourist attraction in New York City’s Times Square on Tuesday afternoon wasn’t the shopping or the people watching — it was a bee swarm.

Yes, you read that correctly: A swarm of bees took over the umbrella on a vendor’s hot dog cart near Broadway and West 43rd Street. The hundreds of bees gathered while tourists and others rushed to document the phenomenon.

Crazy video I just took – this guy’s hot dog stand in Times Square has been completely overrun by bees. pic.twitter.com/EX0RoZgKev

But, why? Do bees have a secret love for street meat that we don’t know about? Not exactly.

Why do bees swarm in random places?

Bee swarms — like the one spotted in Times Square — happen when one queen bee and her hoard of worker bees leave their current hive home to find a new one. But before that happens, the swarm of bees often takes a break to rest. Most of the time, the rest stop is a tree branch, but it can also be in weird places like car bumpers, light poles and even an umbrella on a hot dog stand. 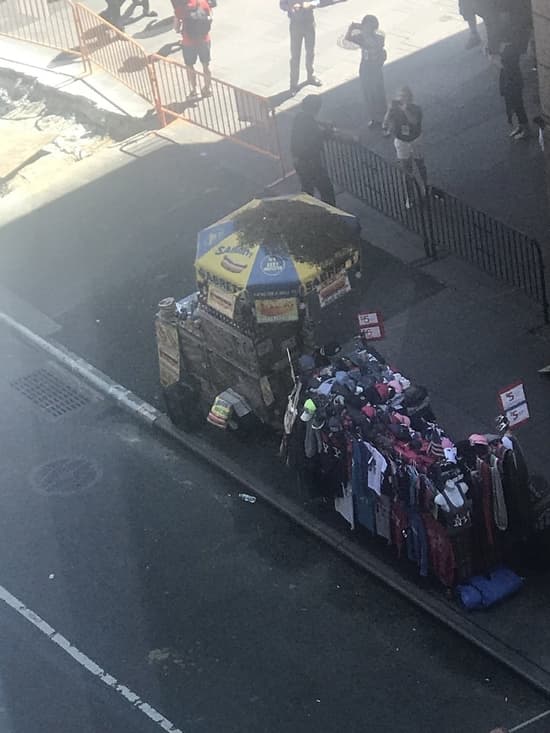 “So how can you tell when a bunch of bees are just visiting a spot temporarily? The answer is simple. Swarming bees don’t have any [honey]comb,” Mr. Homegrown writes on Root Simple. “They’re just hanging out in a big ball of workers with the queen in the center. If you don’t see comb, you know this swarm is just temporarily resting in that spot.”

The bees won’t stick around for long, either. The only have a short window to find a new home before they die, so they’ll leave before that happens.

“Bees that have swarmed have no honey to protect and tend to be very docile… Odds are that they will move on in a few hours or a day or two at most,” Mr. Homegrown wrote. “You don’t need to call anyone or panic.”

There’s a guy vacuuming bees off a hotdog stand in Times Square and you can watch it happen LIVE here https://t.co/Tzmqa02Lnp pic.twitter.com/WKRCB2wJ9Q

Unfortunately, the Times Square bee swarm didn’t get the chance to leave on their own. An employee of the NYPD used a vacuum to remove them from the umbrella soon after they landed.