A mind-altering conversation with the Lucas Brothers - Metro US
Entertainment

A mind-altering conversation with the Lucas Brothers Twins Kenny and Keith Lucas, otherwise known as the hilarious comedy duo The Lucas Brothers, have a lot on their minds these days. Their calm and dry delivery may fool some people at first, but the two brothers are some of the most creative thinkers going in comedy. With memorable guest roles in 22 Jump Street and Maria Bamford’s gone but not forgotten Netflix show Lady Dynamite, The Lucas Brothers’ matching wardrobe is instantly recognizable as is there chilled out back and forth. We caught up with Kenny and Keith ahead of their upcoming stand-up tour to talk about their thoughts on the legalization of drugs and its lasting effects on culture and some of the big movie projects they are currently working on.

A mind-altering conversation with the Lucas Brothers 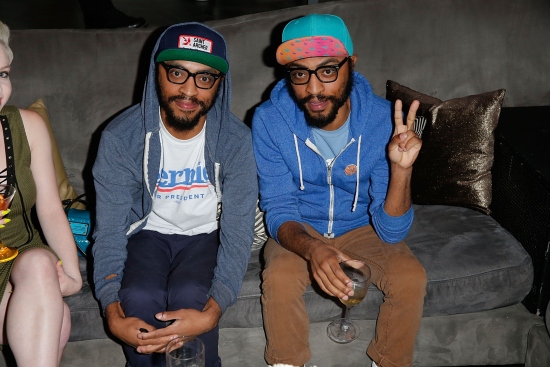 So you guys were studying at NYU Law School before starting in comedy. What made you choose such a 180-degree change in your lives?

Kenny:  I think it was a combination of that we were both sort of disillusioned with the law school process. I think we both had an inclination that we both wanted to do something else that was artistically inclined.

Keith: We were both very, very dissatisfied with the whole experience. We were both suffering from depression. We both picked up drinking problems. It got really bad. Law school is an incredibly stressful environment and I don’t think we really understood what we were getting ourselves into. Once we got there and realized it wasn’t what we wanted to do, that’s when Kenny started thinking about other alternatives for us to potentially explore. We’d always been fans of stand up comedy in general, so stand up sort of served as an outlet for us. So Kenny called me up, and we quit.

In your last Netflix special, Lucas Brothers: On Drugs, you talk a lot about your experiences with drugs. It makes sense since it really informs the lucid style of your comedy from both your stand-up and the surreal qualities of your old show, Lucas Brothers Moving Co. Do you feel as though drugs inform a lot of your creativity?

Keith: I’m not saying because of drugs, our minds are freer. But I think a combination of marijuana, shrooms and philosophy has helped our minds become a little bit more nimble. In law school, there’s a rigidity there. Because we studied philosophy, we sort of became freer thinkers and it was kind of tough to conform to that rigidity. By smoking marijuana and doing shrooms it has allowed us to open our minds a little more and it certainly reflects on the comedy that we perform and the things that we write.

Do you think legalization of weed will have an effect on pop culture as a whole?

Keith: Obviously some of the mystery behind weed is the fact that it is illegal. It’s seen as rebellious when you smoke weed. When it gets legalized and everyone starts to smoke I think it will lose a little bit of its edge in terms of cultural rebellion. You’re not gonna get Cheech and Chong anymore. It’s going to be ubiquitous and you’re going to get people to claim about that it’s healthy in many ways. I think we’ll find other ways to be creative. I don’t know if weed is a prerequisite for being your most creative. I just want people to stop getting locked up for smoking weed. I’ll take that over the creative stimulus.

Now that many states are legalizing marijuana, do you think it will lose it’s counter-culture status once it is regulated by the government?

It’s almost like when you really like a band and you don’t want them to blow up so you can keep them as your little secret?

What can you tell us about the new film you are working with Jermaine Fowler and Lil Rel Howery, The Come Up?

Kenny: It’s still in early stages of the process. It’s gonna be a film with Jermaine Fowler and Lil’ Rel Howery. It’s basically a heist film. Warner Brothers picked it up. We’re super stoked to get back to work with those guys. Jermaine is super passionate about the project. He’s been thinking about it since 2014. I’m happy that it has some legs. Hopefully, it’s a hit! But more importantly, it’s just an opportunity to work with your friends.

You’re also working on a script for your own feature film with Judd Apatow. How is that process coming along? Is it still in its early stages?

Kenny: We have a concept in mind. We wrote a full script but now we’re deconstructing that script. Judd’s process is fascinating. He likes continuous rewrites.  So, even if you have a full script you have to keep hammering away until it gets to where it needs to be to get shot. It’s an incredible process learning filmmaking with one of the greats.

Are you guys developing any other Lucas Brothers projects at the moment?

Get tickets for all of the upcoming tour dates on the Lucas Brothers new standup tour here.