Actress Adrienne C. Moore on the final season of ‘Orange Is the New Black’ - Metro US
Entertainment

Actress Adrienne C. Moore on the final season of ‘Orange Is the New Black’ This weekend, the hit Netflix original series “Orange Is the New Black” will be closing the chapter on the inmates of Litchfield Prison for good. In this seventh and final season, the show remains as vibrant and of-the-moment as ever while giving fans conclusions to some of the characters they’ve come to love over the years. I caught up with actress Adrienne C. Moore, who plays Cindy on the show, to reflect on the impact of the show and what fans can expect of its final season.

“Every sentence has a story and there are so many women’s stories to tell that you want to hear from, so to be a part of a show for seven seasons that gave light to Jenji’s story was an honor and I didn’t take it lightly at all,” — Adrienne C. Moore 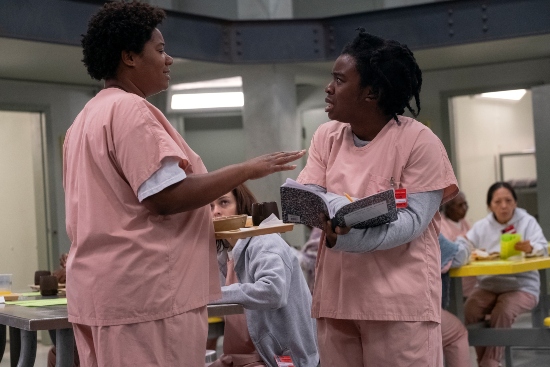 Adrienne C. Moore as Cindy with Uzo Aduba as Crazy Eyes in “Orange is the New Black”.

This is the final season of “Orange Is the New Black,” and we have seen the characters, such as Cindy, develop in huge ways. It must be amazing to look back at the show from where it began in Litchfield.

Adrienne C. Moore: Yeah, well, the biggest thing I think for me — and I’m not speaking for everyone — but I can kind of speak for a lot of people in saying we’ve known this truth and we’ve lived with this reality for a while. So, while the magnitude of it is, yes, it’s incredible and it sinks in like, “Wow, I’m not going to be working on ‘Orange’ after February,” I think a lot of us had that reality back in February. We were filming the show all of last year and the top of this year. It was like we have been running this race for a long time. It’s like, now you guys are seeing where we’ve been running since last year. I definitely had my moments of, you know, it’s bittersweet. It’s a ton of sadness but a lot of elation because seven years, to me, is a number of completion. That just means that there is a new chapter on the horizon. So, there is an excitement to look forward to that, while also knowing that I am not going to see so-and-so as much as I used to see them, I wonder if I’ll stay in touch with so-and-so after this is over. We all got together a couple months ago because it was in time and the award nominations and for-your-consideration moments, and so that was us seeing each other since we had wrapped the show in February. And it was kind of like, at that point so many people had moved on to new and exciting projects and it was kind of like, okay, we got to jump back into this world. So, it was kind of like I am jumping back into this world and those feelings and emotions that I thought I had put to bed back in February.

It’s one of the strongest TV ensembles maybe ever. Your performance in this season is incredible. Did working with such talented actors and actresses, as well as Jenji Kohan, help you elevate your game?

Adrienne C. Moore: You definitely have to elevate your game, not only on set but the game elevation starts when Jenji and the writers send us the script, because they don’t mince words, they don’t apologize, they don’t hand-hold. They’re about telling and exposing the truth, challenging how we view things and how we see people. And so, it began there, with them writing this provocative story about these inmates who most people would have disregarded as criminals and not thought twice about. When you get the script and you see who these characters are that they’re trying to reveal to the world there is a sense of, well, “I just can’t get up there and say the lines, I have to bring this character to life. I have to make their story worth telling because there are so many stories.” Every sentence has a story and there are so many women’s stories to tell that you want to hear from, so to be a part of a show for seven seasons that gave light to Jenji’s story was an honor and I didn’t take it lightly at all.

Has the show given you a new perspective on the prison system in America?

Adrienne C. Moore: I feel this opportunity was sort of beckoning me even before I was made aware. When I was in high school, I interned for the U.S. Attorney’s Office. When I was in college, I worked in politics. I worked for the government, so I felt like I kind of got a sense. I would visit prisons. One of my close friends was a former chief of staff for one of the largest prisons in Georgia, so I had a chance to visit inmates and talk to them and get their perspective. So, I definitely became entrenched in the war. I used to even watch “Scared Straight” as a teen [laughs]. So, we actually did an episode that was similar to “Scared Straight” and I was like, “Oh, watch this episode before I know what to do!” This was definitely bringing all the experiences that I’ve had over the years, dating back since my childhood, and it culminated in this beautifully thought-provoking, engaging, challenging, heart-wrenching yet funny show, “Orange Is the New Black.” Yeah, I definitely think it was a part of my future before I even realized it.

Cindy and Taystee’s relationship has been uprooted from their strong bond in the earlier seasons. Where will we see their relationship going in the final season?

Adrienne C. Moore: That will continue to bomb in the new season. I think Cindy definitely wants to make amends because she loves her friend and she wants to reconcile, but unfortunately that opportunity needs to happen. It’s unfortunate, that’s the reality a lot of times with inmates. A lot of times, inmates are put in those kinds of predicaments where they realize I’m damned if I do, damned if I don’t. If I tell the truth, they’re not going to believe me. If I tell a lie, are they going to believe me? So, it definitely did hurt their relationship and she tries to make amends for that in this season and, unfortunately, that didn’t happen. I think that’s what happens a lot, and as unfortunate as it is, that’s a reality that we wanted to paint between inmates in these scenarios because they are your family. They become your family, and sometimes families break apart over misunderstandings.

The season has never shied away from tackling ripped-from-the headlines subjects, like for-profit prisons and police brutality. What can you tell us about the final season?

Adrienne C. Moore: What I like about every season that ends is that there’s always the possibility for a new beginning and it leaves you wondering, what is that new beginning going to be? I think for some inmates you’ll learn what their new beginning will be and others you’ll still be kind of questioning. I think that, as a person who has been a fan of not only this show but other shows that have invoked that kind of audience response from people, you always want to leave it where you know some things and other things you just won’t. But, what’s going to happen? You want it to end on a high note and I definitely think we did that this season. I definitely think we gave some characters the closing that fans wanted. Others, we gave them a closing that fans didn’t want. And then some you don’t know but you hope the best for them. Like with Cindy, you hope that she will learn from her mistakes and she will learn to move forward and she will learn to be her authentic self, but also to take responsibility. To take responsibility for what and how she contributed to things being the way they are.