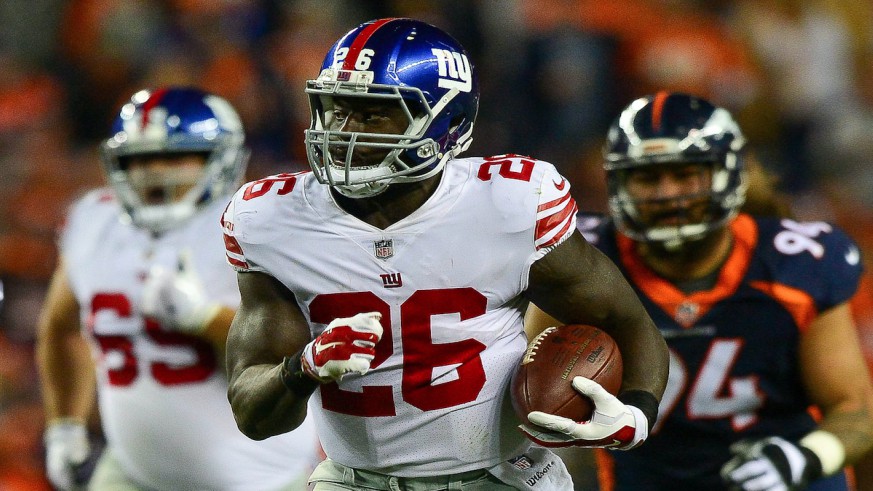 Fantasy football advice on Orleans Darkwa, Corey Davis, DeMarco Murray and more ahead of Week 7 in the NFL.

Coming into the season it looked like Paul Perkins was locked in as the starting RB for the New York Giants. However, injuries and under-performance have ostensibly removed him from the depth chart. The Giants hadn’t been able to get anything going on the ground this year until Orleans Darkwa burst onto the scene against the Broncos in Week 6. Darkwa piled up 117 yards on 21 carries, an impressive feat considering the Broncos haven’t allowed more than 57 yards to any rusher so far this season. The explosiveness that Darkwa showed in that game likely earned him some separation from rookie Wayne Gallman on the depth chart. Darkwa should have every-week flex appeal until he shows otherwise.

Rookie first-rounder Corey Davis was selected by the Titans to act as the new number one receiver for Marcus Mariota, and breathe life into a passing game that sorely needed it. He looked as if he was going to do just that, hauling in six catches for 69 yards in his first professional game. However, he has since been out with a hamstring injury, and he doesn’t carry the high profile that encourages fantasy owners to wait out the injury. He will likely be available in most leagues, and is worth an immediate add in any format considering he is ramping up towards playing in Week 7. If he is able to log any practice time this week, he could be available for the Titans’ Week 7 tilt against the Browns. Even if he doesn’t suit up, the Titans are on bye in Week 8 which should afford the talented rookie enough time to get back to full strength. You’ll want him for the fantasy playoff push.

DeMarco Murray Ceding Too Many Touches

DeMarco Murray rumbled into the end zone from three yards out in Week 6, but outside of that he managed just 40 yards on the ground on 12 carries. He also added in four catches for 47 yards, but the big takeaway from the game is that Murray had seven fewer carries than Derrick Henry. Murray is in the twilight of his career, and the Titans clearly see Henry as their workhorse of the future–his 19-131-1 line in Week 6 is certainly evidence that he is capable of excelling when given the touches. This is still a timeshare, and both Murray and Henry will continue to see work, but given the near-even split (if not 60/40 in favor of Henry), it’s impossible to rely on Murray for RB2 production unless he gets into the end zone. Murray owners should be in sell mode now while Murray is coming off a decent fantasy day.

Chris Ivory, RB, Jacksonville Jaguars – Leonard Fournette has been plagued by ankle issues for most of his football career, and this week’s injury scare reinforced the fact that Chris Ivory could play a prominent role should the dynamic rookie continue to deal with those issues.

JuJu Smith-Schuster, WR, Pittsburgh Steelers – With Martavis Bryant clearly not a favorite of the Steelers organization, this rookie could quickly become the number three option in the Pittsburgh passing game behind Antonio Brown and Le’Veon Bell.

George Kittle, TE, San Francisco 49ers – Rookie C.J. Beathard took the starting job away from Brian Hoyer midway through the 49ers’ Week 6 loss, and once he got in there he peppered Kittle with targets. He should continue to act as a safety blanket as the rookie acclimates to the NFL.