Street festivals are a staple of New York life, when streets belong to the people for some much-needed time time for outdoor street festival fun, community-building and get to know a neighborhood better. And as a bonus, they’re always free to attend. Find your tribe at New York’s best block parties and street festivals all year long.

Come one, come all to the Murray Hill Street Festival on Saturday, June 2. The Snarks will be there, dressed as historical figures who lived in #murrayhill. Last year’s lineup included JP Morgan, Andy Warhol and #gibsongirl. Learn neighborhood history and get your photos taken! #familyfriendly #kidfriendly #nycfamily #nyckids #tbt

This is a true New York street festival, created by neighbors for the city to come and see what their little corner of the city is about. The Murray Hill Street Festival is more like a six-block flea market, complete with a bake sale of goodies made by residents and a library where they contribute gently used books, costumed performers dressed as historic neighborhood residents, food from local restaurants, live performances and guided walking tours. June 2, west side of Park Avenue from 34th to 40th streets, free, murrayhillnyc.org

A community art project has transformed an industrial Brooklyn neighborhood into one of the city’s cultural destinations. Watch the masters at work during the Bushwick Collective Block Party, a day-long festival celebrating the transformative power of graffiti and street art — oh, and there’s a music festival with some serious starpower: This year’s headliner is rapper Ja Rule. Now in its seventh year, the day-long event showcases murals that continue to redefine a neighborhood, with new works being created all day, plus local food vendors and artsy activities like face painting for kids and “glitter makeovers” by House of Yes. Saturday, June 2, 11 a.m.-6 p.m., free or go VIP for front-row views and other perks for $117, thebushwickcollective.com 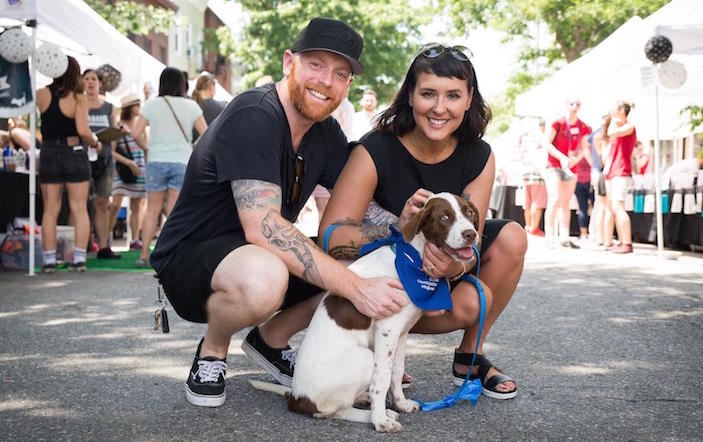 This is among the most animal friendly of block parties because, for once, it’s not about us — it’s about our four-legged best friends, and helping those still looking for their forever homes. Badass Brooklyn Animal Rescue works with rural high-kill shelters mostly in the South, and their annual SummerFest block party lets you meet over 100 of their hopeful pups while entertaining your BFFs with agility tests, a doggie fashion show, speciality treats and tons more activities. For the humans, there’s a doggie kissing booth, food and brews, crafts and more. Sunday, June 10, noon-5 p.m., President St. between Third Ave. and Nevins St. in Gowanus, free, badassbrooklynanimalrescue.com 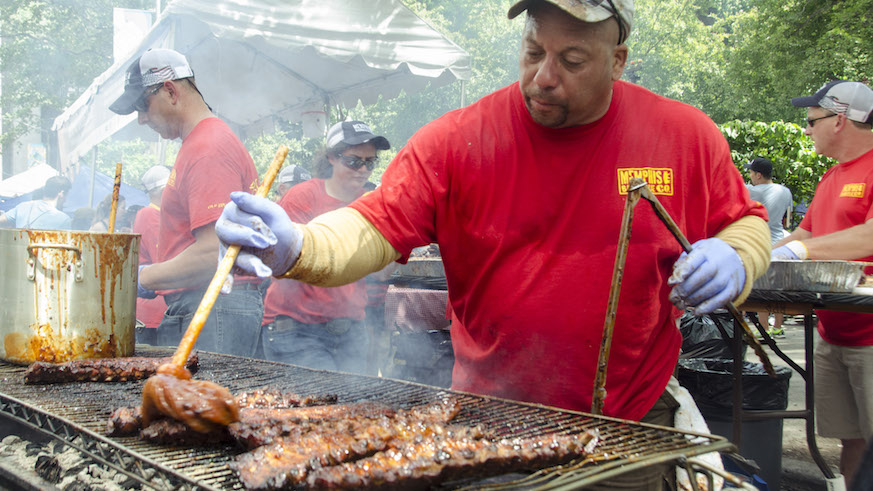 In the summer of 2007, when Shake Shack was just a cart in Madison Square Park, Danny Meyer decided to throw a barbecue party. That event has grown into the city’s largest cookout, the Big Apple Barbecue Block Party, with a dozen of the best pitmasters in the country (and plenty of local talent) setting up their grills and smokers in the park for two days of non-stop barbecue, bands and beer. June 9-10, 11 a.m.-6 p.m., free, bigapplebbq.org

This is the big kahuna of artsy block parties: All of the museums and cultural institutions along Manhattan’s Museum Mile reclaim Fifth Avenue from 82nd Street to 105th and bring activities, live music, art classes and crafting onto the street. Need to cool off? Admission is also free during the fest to the Met, Guggenheim, Neue Galerie, Jewish Museum, Cooper Hewitt Design Museum, Museum of the City of New York and El Museo del Barrio. Tuesday, June 12, 6-9 p.m., free, museummilefestival.org 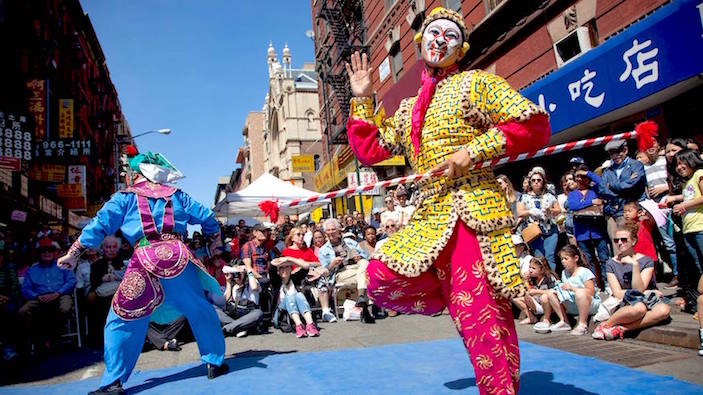 Where else are you going to find a block party that mashes up Jewish, Chinese and Puerto Rican flavors and traditions? Egg Rolls, Egg Creams & Empanadas is a project of the Museum at Eldridge Street to highlight all the cultures of its neighborhood with Chinese opera followed by klezmer music, Puerto Rican artists and challah-braiding demonstrations, craft workshops where you’ll make yarmulkes and lace, a mah jongg tournament and more. And, of course, plenty of the fest’s namesake foods for sale all day. June 17, noon-4 p.m., free, eldridgestreet.org 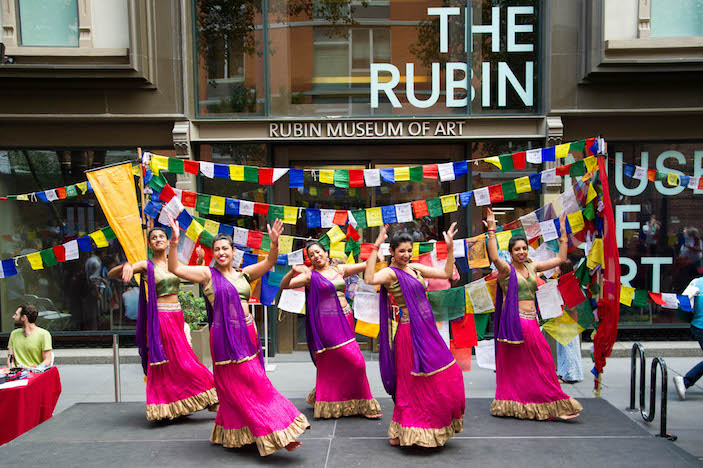 The Himalayan treasures inside the Rubin Museum of Art are not the only way the museum helps connect New Yorkers with Asian’s rich cultural heritage. Its annual street party brings dance performances from Bollywood to bhangra, plus tons of arts and crafts, wellness activities and exhibits inspired by the museum’s year-long exhibit on The Future, plus food trucks and free admission all day. Sunday, June 17, 1-4 p.m., West 17th Street between Sixth and Seventh avenues, free, rubinmuseum.org 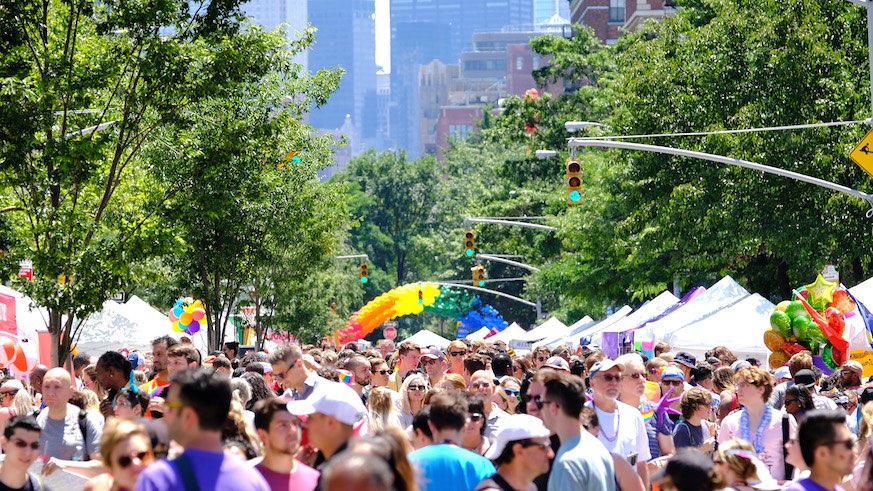 Celebrate the rainbow of gender expression at Pridefest, the annual LGBTQ street fair. It’s the perfect place to find rainbow swag, not to mention great food, community organizations to support, activities like hula-hooping in the middle of the street and more. Oh, and the Pridefest stage drawns some pretty big names — this year’s host is Ross “The Intern” Mathews, with a full day of musical performances headlined by “Glee” star and Broadway performer Alex Newell. June 24, 11 a.m.-6 p.m., University Place between 13th Street and Waverly Place, free, nycpride.org 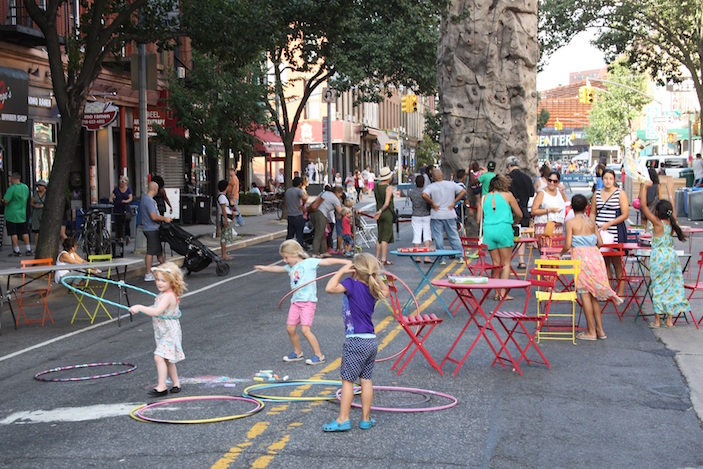 A block party where nothing is for sale? That’s what the Park Slope Business Improvement District does four times a year with its Fifth Avenue Summer Strolls. Instead of traffic, the trendy Brooklyn neighborhood’s streets will be moving with a different rhythm like fitness classes and dance parties, kid-friendly activities like a climbing wall and face painting. Lounge in the pop-up park, ooh at the classic car show, catch some live music or choose your Summer Stroll based on each day’s own special event, from Shakespeare on the Street, eating contest or a doggy fashion show. South Slope on July 21 & 28, 5-9 p.m., Fifth Avenue from 12-18th streets; North Slope on Aug. 11, 5-9 p.m. & Aug. 18, 5-8 p.m., Fifth Avenue between Dean and Sterling streets, free, parkslopefifthavenuebid.com

For 10 days, Little Italy becomes one big party in celebration of the religious Feast of San Gennaro. For 11 blocks of Mulberry Street between Canal and Houston streets, the neighborhood hosts an entire day of fun starting at 11:30 a.m. with tons of food stalls and vendors, plus a processional on feast night, live concerts and special events like eating contests. Over 1 million attend each year, so if you’re looking for a party as big as anything Italy throws, this is it. Mid-September, 2018 dates TBA, sangennaro.org 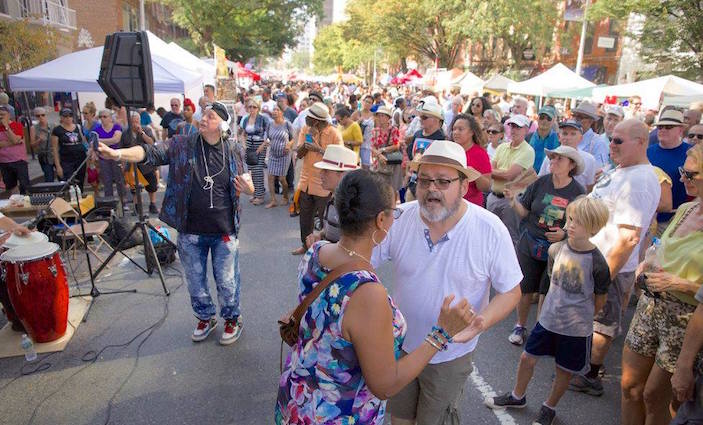 Brooklyn’s busy Atlantic Avenue comes to a halt every September during Atlantic Antic, when the street becomes a giant marketplace with more than 500 restaurants, breweries and local vendors, many of them setting up on the street right outside their shops. In between browsing, you’ll come across activities like a giant inflatable slide and a petting zoo, plus 15 stages of entertainment by local musicians and community groups. Sept. 23, noon-6 p.m., Fifth Avenue between Hicks Street and Fourth Avenue, atlanticave.org

The Upper East Side’s cultural hub 92Y throws open its doors for a 20-block festival of art and the area’s best food. The family-friendly fun includes free performances including numbers by Broadway casts, sporty activities like pint-size basketball and slides, face painting, drumming, raffles and tons of booths by local businesses to get to know the neighborhood. Sept. 30, noon-5 p.m., Lexington Avenue from 79th to 94th Streets, 92y.org/streetfest 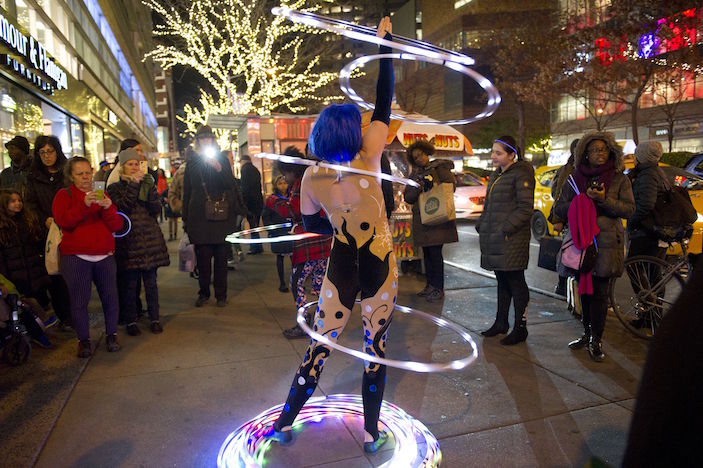 Block parties are usually a summer affair, but the Upper West Side’s annual holiday celebration Winter’s Eve takes place at the end of November. Live music and street performers take over the sidewalks from Columbus Circle up Broadway all the way to 66th Street. Winter’s Eve also doubles as the city’s least spendy food festival, with more than 30 local restaurants setting up booths including fancy post-opera destinations like Bar Masa as well as crowd-pleasers like Sugar Factory — and every dish is $4 or less. Nov. 26, 5:30-8:30 p.m., winterseve.nyc