After the introduction of streaming platforms like Spotify and the constant barrage of promotion through social media, the conversation between fans and bands has changed from “Have you heard this great album?” to “Where is the new album?” It can be an unfortunate feeding frenzy for artists these days, where the hungry customer always knows that there is always another kitchen open when another one closes down for repairs. The highly influential Urbana, Illinois band American Football was able to avoid this kind of pressure from fans by playing it slow from the very beginning.

” Let’s write the songs that we want to, right now. We’re kind of starting over. We feel like a new band,” – Mike Kinsella, American Football 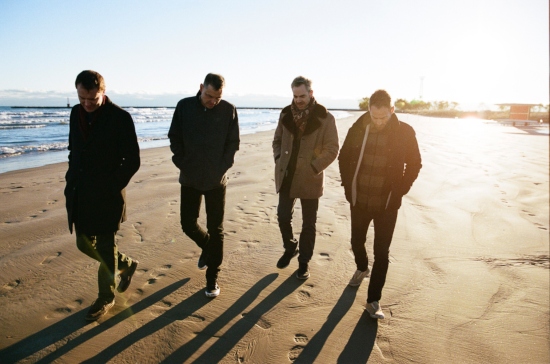 Formed in 1997, the band released one self-titled album that inspired countless bands with their slowcore-meets-emo sound. After calling it quits in 2000, that album only swelled in importance. Fans were dying for a reunion, and they got their wish in 2014, as the band announced they would be getting back together for a string of shows. The tour went so well that the band decided to get back into the studio in 2016 to release a new album. But after the wait, did fans welcome a new addition to an already perfect legacy with open arms?

By most accounts, the second self-titled release was a success to all who heard it. Well, perhaps not to the band’s lead singer-songwriter, Mike Kinsella. “I think we thought the songs on ‘LP2’ were good, but we thought we hurried everything. Literally and figuratively,” says Kinsella.

Kinsella and the band toured that album extensively but felt as though the pressure of delivering on the folklore of the band had perhaps muddied the waters a little bit and that they would need to recapture their inspiration in a more purposeful way. Released last March, the band’s third self-titled record does exactly that, with eight elegant and sprawling songs that capture the same captivating emotional feel that pulled fans in all of those years ago.

“I think, in hindsight, we did feel pressure on the second one and I think we were sort of caving to it a little bit,” says Kinsella, regarding the band’s newfound sense of purpose. “We didn’t realize people had listened to the band or cared about the band and then all of a sudden we found out a lot of people did. Then we had people telling us all of these ways to make a lot of people happy. As much as we think we’re above that, I think it did influence what we were doing to some extent. We weren’t as satisfied creatively as we thought we could have been or thought we would be. Going into the next one, we all agreed [to ask], ‘What are the things we want to do and what are the things that interest us?’ So we concentrated on that a lot more and the songs came out a lot different, I think.”

The new record bursts with possibilities as it contains new textures and instruments the band had never dared to use before to color their songs. Furthermore, the band enlisted the talents of three special female guest vocalists — Hayley Williams of Paramore, Elizabeth Powell of Land of Talk, and Rachel Goswell of Slowdive — to introduce a new cast of characters into the band’s traditionally insular world.

“It was somewhat organic,” says Kinsella. “As I was writing vocals, I was writing these falsetto melodies. I would have a main melody and different lines came up and we decided it would be super cool to have a girl doing it… Their contributions totally make the songs for all us. After doing the same thing over and over, every time their stuff comes in it’s like this new life. We’re really stoked.”

In the five years since the band has become active again, they have managed to do the unthinkable: They have transitioned from riding the excitement of a reunion tour to creating music that feels as vital as their younger contemporaries who may be benefiting from the trail they blazed all of those years earlier. Of course, none of this is lost on Kinsella, who views all of this as a complete surprise.

“It’s funny, because it took us all by complete surprise when it all first happened in 2014. Then at some point, when we were making the second record, we kind of fell for it,” explains Kinsella. “We were, like, ‘Oh my god, this is so cool. We’re in this popular band!’ I spent 30 years being in not-popular bands [laughs]. I think there was maybe a little backlash. Maybe it was more reunion stuff than we thought it was. I think we thought it was going to sustain itself as, like, ‘This is cool, a lot of people care.’ But maybe a lot of people care, as it turns out, because it wasn’t supposed to happen, you know? So we went and did this record and were, like, ‘Well, if we’re not beholden to these fans, let’s just write the music we want and let’s proceed assuming that we’re not a popular band and are some band that just likes hanging out with each other. Let’s write the songs that we want to, right now. We’re kind of starting over. We feel like a new band!”

Check out American Football on tour and listen to their new album, LP3, below.