The day that would forever change Dr. Sandy Kapoor, one of the late Anna Nicole Smith’s doctors, started off like any other day.

“I was in my bedroom, going through an infuriating ritual that makes me late to my clinic every single morning — I have a doctorate from the Boston University School of Medicine, but for the life of me, I can’t make sense of my sock drawer,” he wrote, opening chapter one of his book “Trust Me, I’m a Doctor.”

The date was Oct. 17, 2007. Just before 7 a.m., Kapoor tried in vain to find a matching pair of socks in his bedroom, his twin newborn sons slept in a nearby room and his father proudly affixed a license plate onto his son’s brand new BMW parked in the driveway. Los Angeles Police Department cruisers screeched to a halt in front of his home, which filled with LAPD officials and people wearing DEA-stenciled jackets.

They wanted to know about the circumstances surrounding the death of Anna Nicole Smith eight months prior, later ruled the result of an accidental drug overdose. Kapoor was Smith’s doctor, but he said he hadn’t seen her in the seven months before her death.

Metro spoke to Kapoor about his book, his relationship with Smith and the decade since her tragic death.

Naturally, we asked him the most obvious question first: Have you figured out how to match your socks yet?

“No,” Kapoor told us with a laugh, “in fact I have not. I still have that bane of my existence.”

Despite a housekeeper’s help, his sock drawer has only gotten more confusing, he said, as his 10-year-old twin sons’ feet continue to grow and catch up to daddy’s.

Kapoor said he wouldn’t necessarily call himself a “friend” to Anna Nicole Smith. As a concierge doctor, he often makes house calls (or calls to the hair salon, as he did the final time he saw Anna Nicole Smith alive), but at the time, a feeding frenzy occurred over a photo from the Gay Pride Parade years earlier.

Admitting he got caught up in the fun of being a celebrity doctor, Kapoor maintains that aside from some raucous fun during the parade, he was merely Smith’s doctor.

Anna Nicole Smith was on methadone when she and her doctor stepped out as peers and alcohol was imbibed, the doctor mentioned, despite methadone and alcohol not mixing. However, according to Kapoor: “You shouldn’t drink when you’re on methadone. That was the Gay Pride Day [and] people do a lot of things they shouldn’t do, like drink with antibiotics. … She didn’t stop breathing from that. She didn’t die from methadone.” 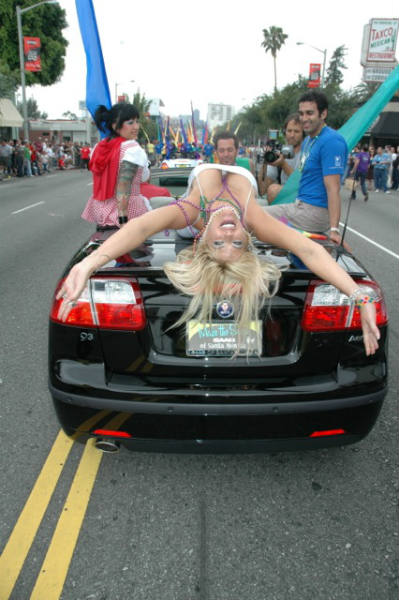 But the sloppy, slurring Anna Nicole many knew from TV and public appearances might have been an act, Kapoor said

He recalled one time when Anna Nicole went from her normal voice to “that baby voice” as soon as the cameras turned on. Once the cameras were off, “she had a normal voice,” he said. “She wasn’t slurring … maybe she is better at acting than people think she is,” he added with a laugh.

Kapoor called Anna Nicole the “first reality show before the Kardashians” and a “train wreck,” but without a discernable hint of judgment in his voice. Reflecting on his last visit with her in the hair salon, Kapoor said he wished he could have gotten her help with her grief after Daniel died or was sure she took her medication appropriately, but Anna Nicole — who seemed “stable” at the time, according to Kapoor — was able to turn “it” on like a switch and manipulate those around her.

“She believed herself to be a legitimate actress who was working and it was, I believe — some of it was an act,” Kappor said, casting doubt on the image of Anna Nicole as a party girl. “She wasn’t going to Hollywood parties all the time … she did red carpet appearances because her persona was bigger than life and she knew that’s what they wanted to see.”

Kapoor said, in hindsight, partying with his patient at the Gay Pride Parade wasn’t the best decision he’s ever made, but he maintains his relationship with the woman who warbled, “Do you like my body?” at the 2004 Billboard Awards was strictly professional. And that professional relationship ended before her fateful trip to the Bahamas.

“You can’t help every patient,” Kapoor explained. “What you lead with is your heart and what is the right thing to do for that patient, and sometimes it’s not enough.”

“I treated Daniel a few times for support when he had a cold or stomach issues. Sweet, nice young man who ended up going back to reunite with his mom in the Bahamas — that was a huge shock and unbelievably horrible surprise. … I think that was a turning point for her. After he died, she just couldn’t move on.”

Kapoor said it is still unknown where Daniel procured the methadone that led to his early death. “Maybe [Anna Nicole] left some around the house,” the doctor surmised.

Dannielynn Birkhead was born in the Bahamas on Sept. 7, 2006, just days before her half-brother’s overdose while visiting his mom and new sister in the hospital.

Due to rumors and controversy, some speculated that Kapoor (or Anna Nicole’s attorney and life partner Howard K. Stern) could be Dannielynn’s father, but Kapoor insists he never had sex with Anna Nicole.

“Maybe the silver lining from everything — from this whole horrific experience — her daughter is a healthy, young, beautiful girl,” Kapoor told us. “[Anna Nicole] was a dynamic woman and … a mother whose child died. And the saving grace is she has this little girl.”

Kapoor said he has met Dannielynn a few times and is in touch with her father, Larry Birkhead.

“He’s doing a fantastic job taking care of and raising this little girl and hopefully preserving the memory of Anna as a strong vivacious woman,” Kapoor said.