Are laser pointers dangerous? Just ask airline pilots and, unfortunately, a 9-year-old Greek boy who is forever altered after using one.

According to a new case study published in the New England Journal of Medicine, the boy went to an ophthalmology clinic in Larissa, Greece, complaining of vision problems. An exam showed that he had perfect 20/20 vision in one eye, but 20/100 in his left.

The reason for the extreme difference? He had a hole on his left macula, the part of the eye’s retina “where light is sharply focused to produce the detailed color vision needed for tasks such as reading and driving,” according to the American Society of Retina Specialists. A macular hole happens when “a full-thickness defect develops in the macula.”

Most of these macular holes happen in people over 55. The reason why it happened in the 9-year-old? Doctors believe he spent time staring at a green laser pointer.

Are laser pointers dangerous enough to do that? Yes, according to one eye expert.

“Macular hole, in general, is usually repairable, but it doesn’t usually happen from laser pointers,” Dr. John Miller, director of retinal imaging at Massachusetts Eye and Ear, told Time. “The laser actually heats up the tissue…and almost burns or vaporizes the retinal tissue, so it’s lost, as opposed to in the more typical traumatic injury or in the older patient population.”

The Greek child’s eyesight didn’t improve in the 18 months following his initial visit — and doctors couldn’t operate because of the size of the macular hole.

Are laser pointers dangerous for pilots?

Laser pointers are dangerous for pilots, too.

It seems unlikely that a simple laser pointer could affect a pilot’s ability to do his job, but it’s a federal offense to shine a laser pointer at an aircraft — and it can result in prison time. 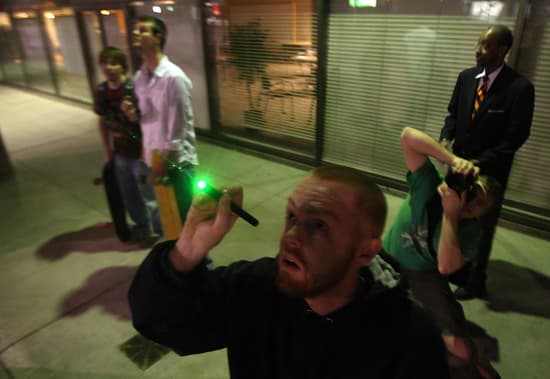 In 2012, Sergio Rodriguez was arrested for pointing a laser pointer at aircraft 13 times. He was eventually sentenced to 14 years in prison. Adam Gardenhire got 30 months for distracting pilot with his laser. Both of these men used powerful laser pointers (meaning they’re stronger than the ones you can buy in the dollar store).

However, even “weak” laser pointers can distract pilots. The light is magnified on the Plexiglas windshield of the airplanes, creating a strobe effect that remains a hazard all the way up to 12,000 feet.

“It’s equivalent to a flash of a camera if you were in a pitch black car at night. It’s a temporary blinding to the pilot and also to the tactical flight officer, whoever we are with,” St. Louis Metropolitan Police Officer Doug Reinholz said during a FBI news conference.

The FBI even released a video of what a laser pointer looks like from a pilot’s perspective.

Luckily, no aircraft accidents have been attributed to laser pointers, but dozens of pilots have either had to divert their path or have been hospitalized because of laser pointers.

So, are laser pointers dangerous? They’re fine to play with, but don’t stare directly at the light — and definitely don’t point them at aircraft unless you want to spend some quality time behind bars.