There’s no end to superhero series these days, but you should mark your calendars for Arrow season 6 episode 1.

Don’t let The CW series get lost in the noise with the other comic-adapted attractions out there. Season 5 of the show ended on a major cliffhanger, and we know fans are eager to see who rises from the ashes of the explosion. If you’re only interested in when the season premiere airs, scroll to the bottom of the page to find out and avoid spoilers. Want to know what’s coming? Go ahead and read on, but don’t say we didn’t warn you about giving things away.

What can I expect from the new season of Arrow?

As you fans already know, the end of the fifth season left the fate of most of the main characters up in the air. We know, infuriating. And the official description of Arrow season 6 episode 1 doesn’t give fans much to work with, either. In case you want the devastatingly spoiler-free description, “Oliver deals with the fallout of the explosion on the island, as Season 6 begins,” according to TV Guide.

But you should be ready to catch Katie Cassidy back again as Laurel’s doppelgänger, Black Siren this season. “We were so taken by Katie’s fearless interpretation of this character that we knew her story was not yet finished. We couldn’t be more thrilled to welcome Katie back to Arrow as Black Siren, though as her appearances on Arrow and Legends of Tomorrow this season show, she never really left the family,” co-showrunner Marc Guggenheim said in a statement. 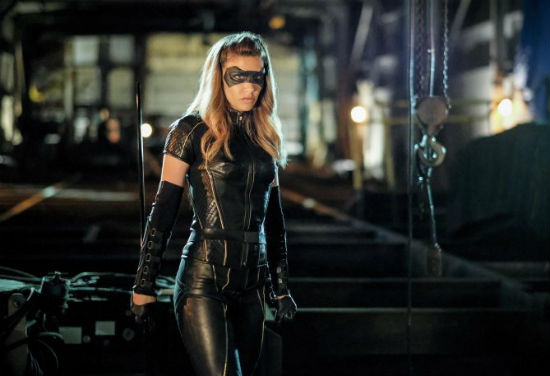 You’ll also be seeing much more of Rick Gonzalez (Rene) and Juliana Harkavy (Dinah), as they’ve been promoted to series regulars. Arrow season 6 will also feature the return of Ragman. Marc Guggenheim confirmed on Twitter that though his character seemingly disappeared toward the end of the fifth season of the superhero show, you can expect him back as early as episode 5 of the new season.

A new face is joining the Arrow season 6 cast, too. Liam Hall will play Slade Wilson’s son, Joe Wilson, in the upcoming season according to EW. Joe, like his father, joined A.S.I.S., the secret Australian military agency. You can expect to see him trapped in a remote Kasnian prison going by the alias Kane Wolfman when the show introduces him this season.

Manu Bennett also got fans excited last month when he took to Instagram to tease the return of Deathstroke in season 6. Check out his post below, and start counting down until the series premieres tonight.

The Black Canary will also show up this season. Juliana Harkavy will bring the superhero to life in the newest season of the show, and spilled a couple spoilers to EW about the new season. Season 6 will apparently pick up 5 months after the explosion that you remember from last season’s finale and will address Green Arrow becoming a public enemy and the fallout from that. And, well, since you know that Dinah will finally don the cape of the Black Canary, you know that she survives the explosion.

Get a sneak peek of Arrow season 6 episode 1

You’re just a couple hours away from the season premiere of Arrow on The CW, but if you’re itching for a tiny bit more to hold you over until tonight, watch the season 6 trailer below. If it only makes the waiting feel more unbearable, you can watch Arrow online through Netflix. The streaming service has the first five season of the show available right now.

So, what time does Arrow season 6 episode 1 start?

Catch Arrow season 6 episode 1 — and hopefully all those answers you’re itching for — when the series returns to The CW tonight, Thursday, October 12 at 9:00 p.m. EST. The premiere episode, “Fallout,” will start right after Supernatural season 13 episode 1 airs at 8:00 p.m. EST.

Log onto The CW’s website right before the premiere comes on at 9:00 p.m. EST to catch Arrow season 6 episode 1 online. If you have a membership to Fubo, you can also catch the episode there. If you don’t, but you’re willing to give it a go to see what happens at the start of the new season, you can sign up for a 30-day free trial.