This Friday, the long wait for the third chapter in the shadowy tale of revenge that is the “John Wick” franchise will hit theaters around the globe. The film, “John Wick: Chapter 3 – Parabellum,” starts where “Chapter 2” left off, with our hero John, played to badass extremes by a never-better Keanu Reeves, running from the assassin’s guild the High Table after they have placed a bounty on his head for breaking their rules of business. Playing “The Adjudicator,” a representative for the High Table, is the actor Asia Kate Dillon, whom you may know as Taylor Mason on Showtime’s “Billions.” We spoke with Dillon about joining the “John Wick” universe and gaining more visibility as a nonbinary, non-gender-conforming actor in Hollywood.

“I love that this incredibly stunning action film is a Trojan horse for asking major philosophical questions.” – Asia Kate Dillon 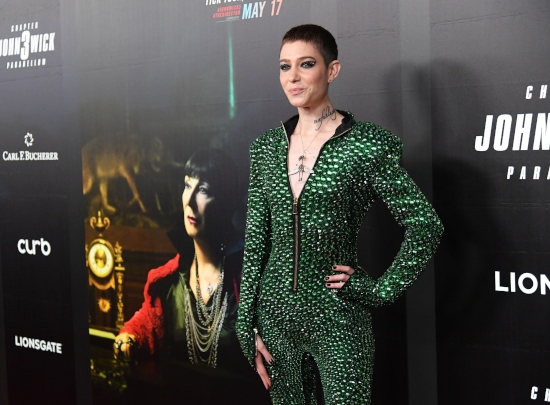 Your character, The Adjudicator, is probably the most fearsome villain of the entire “John Wick” franchise, yet they act in such a calm and “business-is-business”-type way. What drew you to this character in the first place?

Asia Kate Dillon: The Adjudicator was conceived by Keanu Reeves, and then through conversations with Chad Stahelski. They knew that they wanted a character who could come in and intimidate everyone. Even characters who you don’t think that could be intimidated, like Winston or John Wick himself. For me, getting to play a character who not only gets to act opposite Keanu Reeves, Laurence Fishburne, Anjelica Huston, Ian McShane, Lance Reddick and Mark Dacascos, but who gets to walk into a room and own that room, no matter what, was really fun. The Adjudicator didn’t make the rules, they just enforce them. As you said, it is a very straightforward, unemotional job. However, John Wick does present a particular type of danger, which is that he has broken the rules and if he gets away with that without punishment, the ramifications and what that means for the entire “John Wick” world — and ostensibly for The Adjudicator themselves — there could be real consequences if John doesn’t face a judicial reckoning. Getting to play a character who is integral to the plot of the film was a real thrill for me.

When the first film was introduced, it seemed like such an unlikely hit franchise. Now it seems like it is destined to be a classic in the genre. How does it feel to be a part of something so monumental?

Asia Kate Dillon: It feels amazing! I was a huge fan of the first two. I love the “John Wick” world. One of the things I loved about the films is how diverse they are. There are so many different ethnicities and culture and locations around the world. Adding gender diversity to the third film with my character is something that I am very proud of. The “John Wick” world is its own thing [laughs]. It’s its own world! And getting to play a character who helps to take the audience deeper into the mythology and the philosophy of this world was super exciting. Not only do I hope that audiences leave the theater exhausted from the genuine thrill ride of the film, but I hope people are left grappling with [questions like]: Would they side with John Wick? Would they have helped him? Or would they follow the rules of the High Table? How do they feel about the fact that every action has consequences? Whether it’s a good or bad action, you are going to have to pay for what you’ve done. To me, these are very fundamental questions of who we are and why we’re here. I love that this incredibly stunning action film is a Trojan horse for asking major philosophical questions.

Your role as Taylor Mason on “Billions” was the first major role on television to be played by someone who identifies as nonbinary. This new role is definitely one of the largest film roles to be portrayed by a nonbinary actor. How does it feel to bring new visibility to both TV and screen?

Asia Kate Dillon: Honestly, I just feel really proud. I feel really humbled. This year is the 50th anniversary of the Stonewall riots. I certainly am aware that my visibility, my ability to live in my freedom, is because of the literal blood, sweat and tears of trans women and femmes of color, gender-nonconforming and nonbinary people of color who started the queer revolution long before I was born, simply by being visible. To me, I’m just proud to join a lineage of people who have been blazing the trail that I have now gotten to join. It doesn’t feel overwhelming, it just feels really gratifying. I feel very humbled and very proud.

Have you been reached out to in recent years by people who are writing nonbinary characters specifically for you?

Asia Kate Dillon: You know, it is truly amazing that that has started to happen. Where a script will come my way and someone will say, “I wrote this character with you in mind.” It’s incredibly gratifying to be at a place where my work can speak for itself. And, I also know that I will always audition if I’m asked to [laughs] or if it’s a project that maybe someone wasn’t thinking of me for, but I know that I really want to be a part of. I’m not afraid to walk into a room and fight for a role that I really want.

Check out Asia Kate Dillon in the trailer for John Wick: Chapter 3 Parabellum below and make sure to see it this Friday.