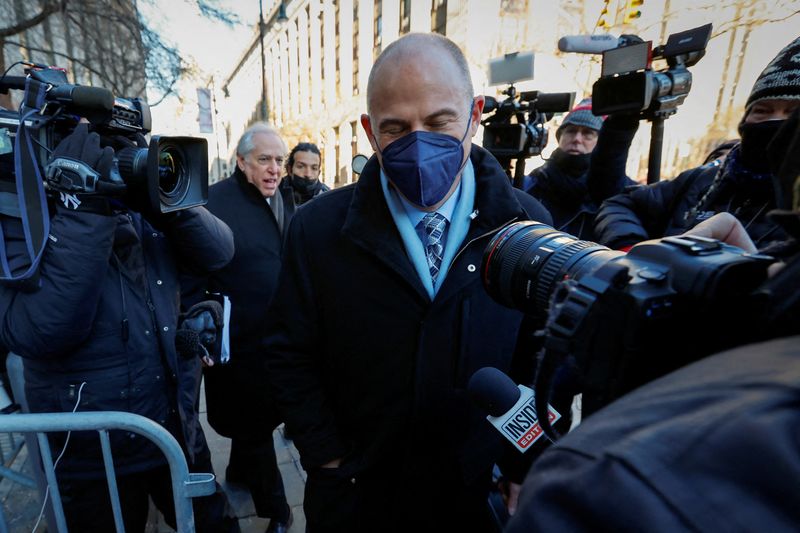 Avenatti, who faces up to 22 years behind bars, had pleaded not guilty to embezzling nearly $300,000 in book proceeds intended for Daniels.

The verdict by a federal jury in Manhattan followed a two-week trial in which the brash, 50-year-old lawyer represented himself.

Avenatti, who is based in Los Angeles, agreed to surrender to U.S. marshals in California on Monday. Sentencing was scheduled for May 24.

Following the verdict, Avenatti, who was wearing a black mask and a suit with a diamond-patterned tie, switched his gaze back and forth between the jury and down at the table he was sitting at.

He vowed to appeal.

“I am very disappointed in the jury’s verdict,” Avenatti said. “I am looking forward to a full adjudication of all the issues on appeal.”

It was the second time in two years that Avenatti was convicted on federal charges in Manhattan. “Rather than advise his clients in their best interests, Avenatti instead used his law degree as a license to steal,” U.S. Attorney Damian Williams said in a statement.

Daniels, the prosecution’s star witness https://www.reuters.com/world/us/porn-star-stormy-daniels-testifies-against-fallen-lawyer-michael-avenatti-2022-01-27, testified that Avenatti had led her to believe her publisher had not disbursed advance payments totaling $297,500 for her memoir, “Full Disclosure,” when she asked in 2018 and early 2019 about the delays.

She said she later learned that Avenatti had diverted the money to an account he controlled, without telling her.

“I felt very betrayed and stupid,” Daniels said. “Michael had been lying and stealing from me.”

In a statement following the verdict, Daniels’ lawyer, Clark Brewster, said his client was “relieved this nightmare is over.”

“Mr. Avenatti possessed the uncanny ability to steadfastly deny the crimes and persuade others he was entitled to the embezzled funds,” Brewster said. “Stormy is pleased that the justice system worked.”

Avenatti had downplayed the dispute as a disagreement over legal fees. He said his contract with Daniels, 42, whose given name is Stephanie Clifford, entitled him to a reasonable share of her book and media proceeds.

Avenatti called no witnesses https://www.reuters.com/legal/litigation/avenatti-does-not-plan-testify-his-defense-stormy-daniels-us-fraud-case-2022-01-31 and did not testify in his own defense. Asked after the verdict whether he regretted his decision to represent himself, he said, “No. Not at all.”

The highlight of the trial was Avenatti’s five-hour cross-examination of Daniels, where he sought to undermine his former client’s credibility by exposing her interest in paranormal activities https://www.reuters.com/world/us/michael-avenatti-cross-examines-ex-client-stormy-daniels-his-fraud-trial-2022-01-28.

Daniels, who is producing a documentary-style TV show on ghost hunting called “Spooky Babes,” testified that she believed she could speak with the dead.

The spectacle of Avenatti questioning Daniels capped a public falling-out for a pair who became cable TV mainstays in 2018 for cases they brought against Trump.

Daniels is known for receiving $130,000 in hush money from Trump’s former personal lawyer, Michael Cohen, in exchange for remaining quiet ahead of the 2016 election about sexual encounters she says she had with Trump, which he has denied.

Avenatti was successful in freeing Daniels from her nondisclosure agreement with Trump.

He gained widespread recognition through frequent television appearances that made him a hero to some Trump opponents, prompting him to flirt with running for the White House as a Democrat in 2020 against the Republican president.

But Avenatti was hit with dozens of criminal charges in March and April 2019 accusing him of cheating Daniels, defrauding several other clients, trying to extort up to $25 million from Nike Inc, and other crimes.

He is appealing his conviction and 2-1/2-year prison sentence in the Nike case in New York. A federal court trial in California over the other alleged client frauds, in which Avenatti also represented himself, ended in a mistrial. The remaining charges have yet to be tried.