Billy Crudup on the emotional standoff of ‘After the Wedding’ The streets of Midtown Manhattan are being treated to a vulgar display of rain outside the hotel where I meet actor Billy Crudup to talk about his new film, “After the Wedding.” In a way, it’s perfect weather to have as a backdrop to talk about such a heavy and emotional film that delivers high-water-mark performances not only from Crudup, but his co-stars Julianne Moore and Michelle Williams.

Adapted from the original Danish film by Bart Freundlich, “After the Wedding” centers around an American woman named Isabel, played by Michelle Williams, who is currently working in an orphanage in India. The organization is running low on funding and they must come up with ideas for how to find investors quickly. Out of the blue, she is contacted by a wealthy CEO named Theresa who is offering to give the orphanage a generous donation. To receive the money, Isabel must travel to New York to meet with Theresa. While hashing out the details, Theresa invites Isabel to stay the weekend and attend her daughter Abby’s wedding. Once Isabel arrives, she immediately recognizes Theresa’s husband (and Abby’s father) as her ex, Oscar, played by Crudup. As information unfolds, Isabel learns that Abby is actually the child Oscar and she conceived years ago and had, supposedly, given up for adoption. From there, more secrets are revealed as to both the reasons why Oscar made his decision to keep Abby and Theresa’s motivations behind helping Isabel.

At the moment when Isabel and Oscar finally reunite, you truly feel the pit in your stomach, secondhand, from the estranged couple. It is almost like an emotional standoff where the audience is to decide which character’s motivations are the most justified given the circumstances of their situation. That kind of moral predicament is what drew Crudup to the film in the first place.

“I feel that so often in life there are not simple answers to human behavior,” — Billy Crudup 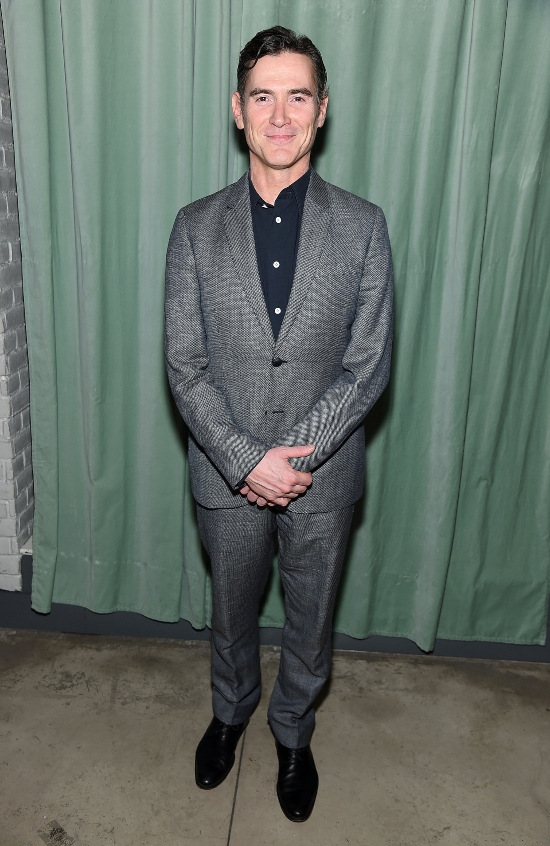 “When we were thinking about doing this movie, I was saying that I wanted to play Oscar when he has to manage that situation,” says Crudup.  “When he’s seen Isabel leave, when they’ve made the pact to give their daughter up for adoption, and when he’s pacing in his room, knowing that she’s six blocks away and he can’t help himself but walk to the adoption agency and that he can’t help but go back. That he’s riddled with guilt now that he has this unforeseen attachment to this young human being that he had no idea would erupt in him in a way that it had and now has no way of contacting Isabel. And that struggle is fascinating and one that creatively is new to me. I haven’t seen that portrayed before. So to imagine Oscar having gone through that and then ultimately coming out of it thinking that he has done the absolute right thing, only to discover later on, after having 20 years of fortification in that belief, to see it completely shattered. That’s a great dramatic arc and  I think a confusing one, too, for audiences.”

Audiences will surely choose who their villains and heroes are while watching this film. But, what the story does so wonderfully is pose the question: What would you do if the shoe was on the other foot?

“I feel that so often in life there are not simple answers to human behavior,” explains Crudup. “I mean, particularly at a time when we’re super-busy identifying our differences, the commonality we have far exceeds that. It’s just much more confusing to tolerate all of it. We try to live in a civil society, but the actual interpersonal communication, expression of beliefs, and expression of values and feelings are dictated by social discourse. And in order to have a reasonable one, you have to have a humane approach to people, which is that we may not agree on things, but we all belong and we all have to try to get along. And that’s, to me, a generous way of approaching a civil-social-society. And so I think this film tries to address that emotionally.”

One of the interesting aspects of this remake of the original Susanne Bier film is that Freundlich chose to swap the genders of all of the characters in order to both show Theresa and Isabel as strong, successful and emotionally complex women, but also to show a new definition of masculinity given that Oscar is mostly dependent on the life Theresa is able to provide for him and his daughter.

Crudup believes this reversal was an important narrative device in order to give Moore and Williams the opportunity to take on such powerful roles, but it also gave him the chance to sink his teeth into the vulnerability of his character.

“That’s an atypical patriarch role, right?” Crudup says. “It does something great for male actors, as well, to be sure to give them the opportunity to find the features of masculinity that happened in that kind of power strip, a structural change. It’s a phenomenal thing.”

See Billy Crudup in ‘After The Wedding’ in theaters this weekend.