Billy Porter on living life out loud - Metro US
Entertainment Billy Porter is on his lunch break during what many would consider a late dinner. Many members of the press were lucky to gain an audience with the esteemed actor in between his shooting schedule for the second season of FX’s acclaimed show Pose, which focuses on the New York City Ball Scene of the 1980’s. Porter has gained wide praise for his role as Pray Tell, the revered emcee of the scene, and his larger than life personality can be felt as he is eating his catered meal in a Bronx soundstage.

“I’m still going to have to fight that every single day of my life. I’m prepared to do so because service is showing up for myself,” – Billy Porter 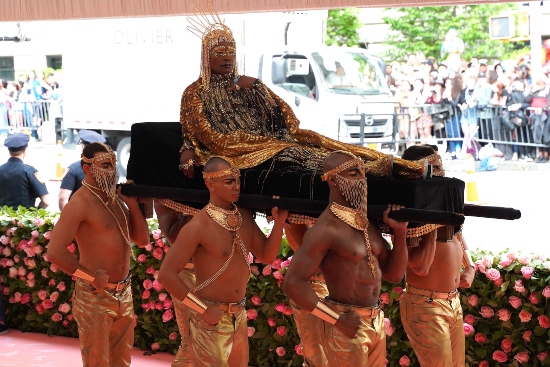 The round-table conversation was intended to deal with the premiere of the new season on Tuesday, June 11 — more on that next week — but eventually circled around to Porter’s recent universal acceptance after over 25 years in show business. Much like the characters on the show, Porter, 49,  has had to fight through the prejudices in Hollywood surrounding race, sex, and gender, in order to have the world catch up with his true authentic self.

“The thing I love about this show is that it really speaks to the idea that joy is a choice,” says Porter. “It speaks to the idea that life is a choice. You can choose it or not. When you watch people in the depth of the worst kind of circumstances possible, choose life anyway. That’s what this show is about. We’re choosing life anyway when everybody is telling us that we don’t even deserve to exist on this planet, and we’re living through a plague! There’s nothing for these people. Literally nothing. Having been there… on paper I’m not supposed to be here either. On paper I’m a statistic. Billy Porter, sitting right next to you, is a statistic. But most of us are, and it continues! As the world moves forward and we win some rights and as things get better it gets more and more difficult to explain to people that the disparity is still too much. I think what’s interesting about art, because I always say at what cost, as an entertainer for the first part of my career I went into the what I call the millennium ‘C–n Show’ position where I could do these things to ‘stop shows’. I could entertain you, but the ‘at what cost” part of the story which is my human story, which is the third dimension part of my humanity, is shut out. We don’t want to hear that, just come and entertain me. You black people, you gay people, you whatever. It’s like you can come and sing for me, but you can’t stay at the same hotel. It’s the same s–t.”

It’s hard to believe that someone with such a well-rounded background ranging from theater, music, and screen has had to wait for the world to change in order to balance within his orbit. But, that is something that we need to remember during this historic World Pride. Showing your authentic self is the only way to stand in resistance to those who are trying to silence you. While it has been a long road for Porter, he is certainly not turning back now.

“It’s interesting for me because I was presented, in my hero’s journey,  with it 20 years ago, I could stay on this road and be the clown and be the sideman and do the same s–t or I could honor myself, be completely authentic. I chose my authenticity over any version of what the possibility of fame could look like inauthentically. I walked away from it. I walked away from the record contract I had and I took a moment to breathe. I was watching Opera actually, as I am want to do. We’re the Opera generation. It was before I could afford therapy and I was like ‘she’s saying something I need to hear!’ It was her, Maya Angelou and, I think, Iyanla Vanzant, and they were talking about service. When your intention is service, everything else will work itself out. Here I am in show business, and I’m like how can I be of service  to something other than my own ego or my own bank account in an industry that is inherently narcissistic. It’s like you need to have some version of ego to simply survive. How does that happen? And the ton of bricks hit me, oh right, everybody is trying to tell me that I can’t do anything unless i act like a straight man. By acting like a straight man, it’s their version of what a straight man means. It’s their version of performed masculinity put on me. It’s actually not about masculinity. It’s about ‘we know you’re gay, so you will never be able to live up to what our version of masculinity is’. Because from the minute that I could comprehend thought, my masculinity was in question. They sent me to the school psychologist everyday when I was 5 years old everyday after school to talk. About what? What are we talking about? So, from the minute I could comprehend anything, I needed to be ‘fixed’. It was 20 years ago when I said ‘I actually don’t need to be fixed’. I’m fine  just as I am. I don’t know how to live that way, because everything up until now has told me otherwise. I’m still going to have to fight that every single day of my life. I’m prepared to do so because service is showing up for myself. Being authentic for myself first. We teach people how to treat us. If I don’t treat myself right, nobody else knows how. Now everybody else knows how because for 20 years I’ve been showing people how to do it while showing myself.”

Check out the Pose season 2 trailer with Billy Porter.