It was long before Bird Box that Oscar winner Sandra Bullock and acclaimed Danish director Susanne Bier fstarted to search for a project to work on together.

But when they first read Eric Heisserer’s adaptation of Josh Malerman’s book around five years ago they both had no interest in collaborating on it. However, when they returned to the script last year,  the social and political climate had altered so much that Bird Box, which revolves around Bullock’s Malorie and two children trekking through a forest and down a river blindfolded in order to avoid the supernatural catastrophe has caused its victims to see their worst fears and commit suicide, suddenly felt extremely relevant.

“There is a current tone that feels way more relevant to today rather than when the book came out,” Bier tells Metro. “I immediately thought that this could be interesting.”

Bird Box vs A Quiet Place

Bier also was attracted to Bird Box because she recognized the opportunity to create a contemporary and seldom seen heroine with Sandra Bullock’s Malorie.

“I saw something with her part. The chance to do something I hadn’t done before. Both dealing with a post apocalyptic world. But also addressing a kind of contemporary heroine. One that is very unconventional,” says Bier. “Malorie in the beginning of the movie is a pregnant woman that is enclosed and doesn’t want to let people into her life. But throughout the course of the film enough stuff and crazy things happen to her that she becomes more and more in charge of her motherhood.”

Bier and Bullock talked repeatedly about what they wanted to explore and see with the character of Malorie, especially when it came to testing and pushing viewers with her uncompromising and tough treatment of the children.

“She is wary, she is harsh, she is brutal, and sometimes when you see her you might think she’s being too stern. But she is doing it to the protect those kids and ensure their survival,” explains Bier. “I found that really interesting, that the film would show that side of motherhood that is so rarely seen. The forcefulness of the mother to make sure their kids are going to survive. That determination and lack of compromise was really interesting.” 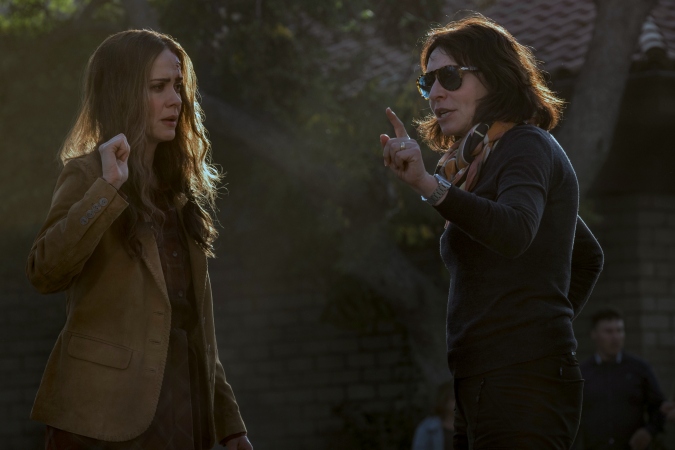 The release of the Bird Box trailer back in October immediately led it to be compared to John Krasinski’s A Quiet Place, which revolves around monsters using sound to hunt humans, thus sign language is used by its characters throughout the mostly silent movie.

“I think A Quiet Place is a really, really great film,” insists Bier when I bring up these comparisons. “But a part of me thinks the reason that they do get compared is that they’re both post-apocalyptic movies.”

“They also both have two really strong female leads,” she adds. “And there aren’t that many films with female leads, so there tends to be an automatic thing with that. But really they are two very, very different movies.”