Bjork’s ‘Cornucopia’ is a truly mesmerizing call to action This past month, the boundary-pushing Icelandic singer Bjork partnered with renowned film director Lucrecia Martel for a brand-new, multi-medium performance in the newly opened Hudson Yards venue, the Shed. “Cornucopia,” the new 100-minute performance, is a spectacle like no other, showcasing one of the great artists of the past 30 years at the height of her creative powers. Metro was on hand for the performance last Saturday to witness it firsthand.

Bjork’s ‘Cornucopia’ is a mind-bending plea for change 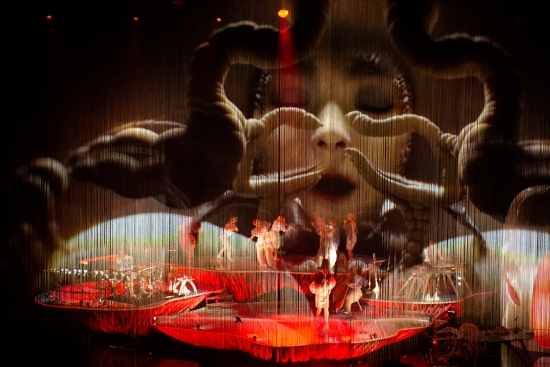 Much like Bjork herself, the Shed feels like it just materialized out of thin air rather than having anything to do with any sort of human intervention. Located within Hudson Yards, the newly opened arts and performance space caters to installations that cross the divide between different mediums. Bjork’s “Cornucopia” was billed as the first exhibit for the space to set the tone for some of the ambitious work to follow. In fact, this show in particular has been described as Bjork’s “most elaborate stage show yet.” For such a constantly evolving artist, this could have been taken as a warning for those going in: Prepare to have your minds blown.

As the seats in the large black theater began to fill up in their multi-tiered and ascending formation, a soft yet loud female voice silenced those shuffling in. “Bjork’s ‘Cornucopia’ is about to start,” the voice announced, and reminded the audience that the artist would like them to turn off their phones and refrain from taking photos and videos in order to not distract her from performing, but also so that they could experience the piece for what it is: an audiovisual journey.

The lights within the theater remained on as a group of young, well-dressed children filed in at the foot of the stage. With some of their faces obscured by animal-like masks, the Hamrahlid Choir ran through a few lengthy and dramatic selections at the direction of their conductor, Thorgerdur Ingolfsdottir.

Once their performance had concluded, the lights went down within the theater and all eyes were glued forward in anticipation. The stage, covered in long, shimmering hanging tassels, was lit up with bright images of animated part-human, part-plant creatures with a brief mission statement on the importance of creating a “utopia” where the lines are blurred between nature and the various species of the world, and that the Paris climate agreement was the first step our planet could take to getting on the right track.

Soon after, Bjork took the stage behind these illuminated curtains. Clad in a costume that resembled two eggs stacked on top of each other with a mask that connected to a giant circular wig, as soon as her voice entered her microphone you could tell that the sound-treating detail that went into the construction of the venue was nothing short of groundbreaking. Backed by six female flutists, a harpist, and two multi-instrumentalists, on a stage that resembled an iceberg, she performed a large selection of her fantastic 2018 album “Utopia,” with every small sound behind her rich and expressive weapon of a voice finding a new place in the mix to surround each audience member in a truly one-of-a-kind audio landscape. Never a stranger to innovation, one of Bjork’s instrumentalists even rigged a microphone to pick up the sound of pouring water as he scooped it out of a container and let it flow back in.

Throughout the performance, the wall of reflecting tassels that dressed the stage would retract and reappear to create new dimensions for projected images as Bjork and her army of flutists danced jubilantly in unison.

During her performance of the “Utopia” standout “Blissing Me,” Bjork was joined onstage by the artist Serpentwithteeth for a reimagining of the song. For another reworking later in the evening, the young choir reappeared to treat the audience to an outstanding rendition of the song “Pagan Poetry” from the 2002 classic, “Vespertine.” Once the main set had concluded, the audience was given a message from the young Swedish environmental activist Greta Thunberg. In her address, projected onto the tassels, Thunberg warned the audience of complacency during our current environmental emergency, advising: “Until you start focusing on what needs to be done rather than what is politically possible, there is no hope. If the solutions in this system are so impossible to find, then maybe we should change the system itself.”

After the address, Bjork reappeared in a new bright, feathered costume to illustrate the hatching of the eggs of her previous wardrobe selection. The artist introduced her band, as well as the choir, and performed two more selections, “Future Forever” from “Utopia” and the “Vulnicura” epic “Notget,” with the powerful ending meditation: “Love will keep us safe from death.”

Bjork’s “Cornucopia” will be back at the Shed for one final performance this Saturday, June 1.