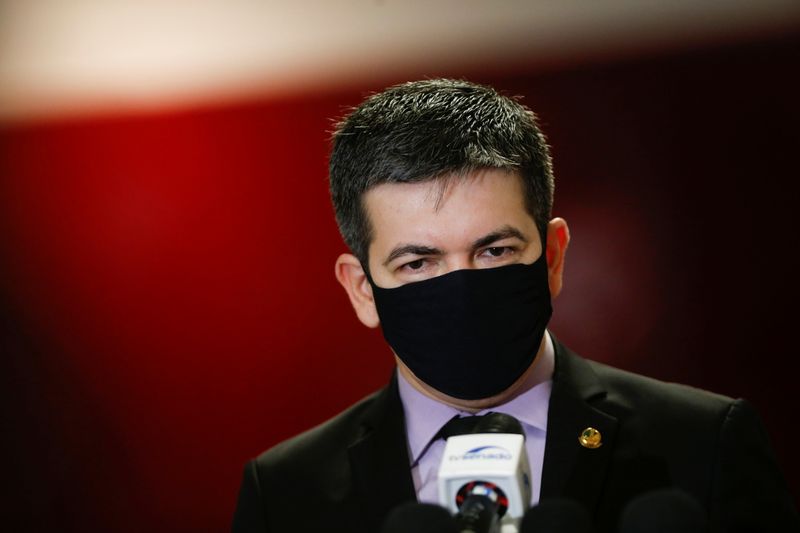 BRASILIA (Reuters) -The head of a Brazilian Senate commission probing the government’s response to the coronavirus pandemic said on Tuesday the body might investigate social media companies, raising questions about the responsibilities firms have for misinformation posted on their platforms.

Last week, the vice president of the Senate commission, Randolfe Rodrigues, requested that representatives of Google, Facebook and Twitter testify before the investigative panel, known as a CPI. The requests have yet to be approved by other lawmakers on the body.

On Tuesday, CPI head Senator Omar Aziz said that while the representatives would testify as witnesses regarding alleged crimes perpetrated via the Internet, the companies could eventually come under investigation themselves.

“They’re being called as witnesses, but, yes, they could be investigated if the commission so decides. So, it would be good for them to come here and explain properly what kind of platforms allow – for an illness so difficult and painful for Brazil – that they still allow their platforms to propagate medication that has no scientific basis.”

A representative for Twitter Inc declined to comment on Aziz’s statements, but said the company had rolled out initiatives to “protect the conversation around the pandemic,” such as promoting links to credible information about COVID-19. Instagram owner Facebook Inc and YouTube owner Google did not respond to requests for comment on Tuesday.

Brazil has been one of the countries hardest hit by the pandemic, with more than 500,000 deaths, second only to the United States.

President Jair Bolsonaro has pushed treatments with little scientific grounding such as hydroxychloroquine and invermectin, sometimes as an alternative to proven methods like social distancing and vaccines.

Millions of Brazilians have turned to social media in search of unproven and sometimes eccentric ways to prevent and treat COVID-19.

The CPI does not have the power to hold anyone criminally liable, but it can pass its findings on to law enforcement.