It’s finally happened! After a brief time of wondering whether anyone would save Brooklyn Nine-Nine from cancellation at FOX, NBC decided to pick it up for a sixth season and now it’s here. Brooklyn Nine-Nine season 6 episode 1, otherwise known by the apt title “Honeymoon,” has finally arrived. So what did everyone think?

If you were worried that moving the show to another network would drastically change things for the better, never fear! Brooklyn Nine-Nine season 6 was never really going to have difficulties fitting in at NBC anyway since the show was already produced by NBC Universal, but with “Honeymoon” showrunner Dan Goor and company have delivered a rock-solid “don’t worry” to the fans.

For starters, there’s the answer to the season 5 cliffhanger. Newlyweds Jake Peralta (Andy Samberg) and Amy Santiago, (Melissa Fumero), the rest of the precinct and the audience were left wondering if Captain Ray Holt (Andre Braugher) got the commissioner job in May. “Well, from the look on my face I’m sure you can guess what it says,” he quips with an absolute deadpan. “No!” Peralta answers. “We have no idea at all. Just tell us, you monster!” 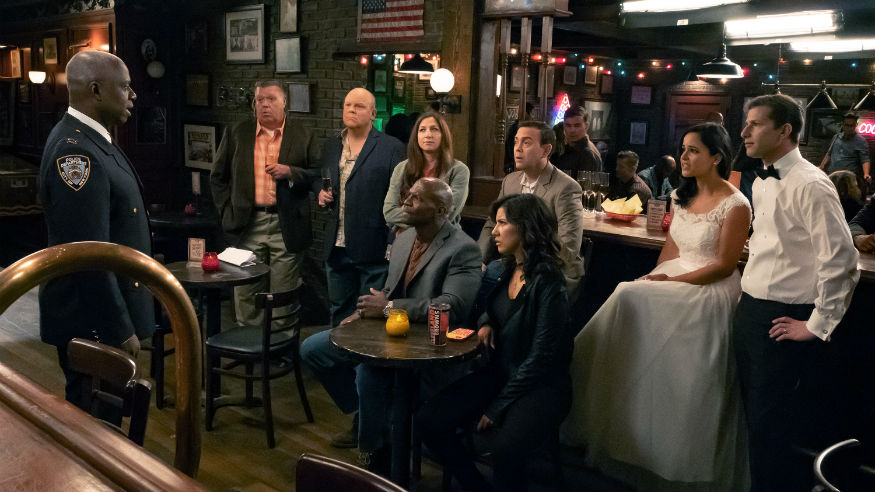 Holt is still an expressionless and domineering (yet lovable) boss, Peralta and Santiago are still madly in love and the Nine-Nine is still as practically dysfunctional as it’s ever been. Which is great news, because the captain’s initial belief that he has won the commissioner gig quickly turns into the realization that he has misread the email. Despite all of his hard work, he will not be the next leader of the NYPD.

What follows is a series of intertwining plots and subplots involving Santiago and Peralta’s honeymoon escape, Holt’s taking an extended leave of absence at the same resort as the honeymooners and the Nine-Nine falling into complete disarray. The latter is ultimately solved when Terry Jeffords (Terry Crews), whom Holt has put in charge temporarily, overcomes a crisis of leadership thanks to Rosa Diaz (Stephanie Beatriz) and gets everything back in order.

The real crux of the episode is Holt’s decision to flee the Nine-Nine and, after misinterpreting Santiago and Peralta’s advice, deciding to leave the NYPD altogether. This short-lived crisis is quickly overcome thanks to Santiago’s declaration that she no longer gives “a hoot” what her idol thinks of her, thereby encouraging him to complain to his superiors about getting passed for the commissioner job. The result? The new commissioner decides to close the precinct’s first floor for renovations.

“Prepare yourselves!” Holt declares as he exits the elevator into the now-overpopulated bullpen. “The Nine-Nine is at war with the NYPD.”

If you happen to detect the slightest hint of meta-narrative in Holt’s not getting the commissioner job and going to “war” because of it, you won’t be alone. After all, Brooklyn Nine-Nine was denied another season at FOX before NBC swooped in to save it, so the comparison works loosely. Even so, don’t count on Goor and the writers spending too much time on the analogy.