Bruins David Pastrnak coming into his own as an NHL superstar 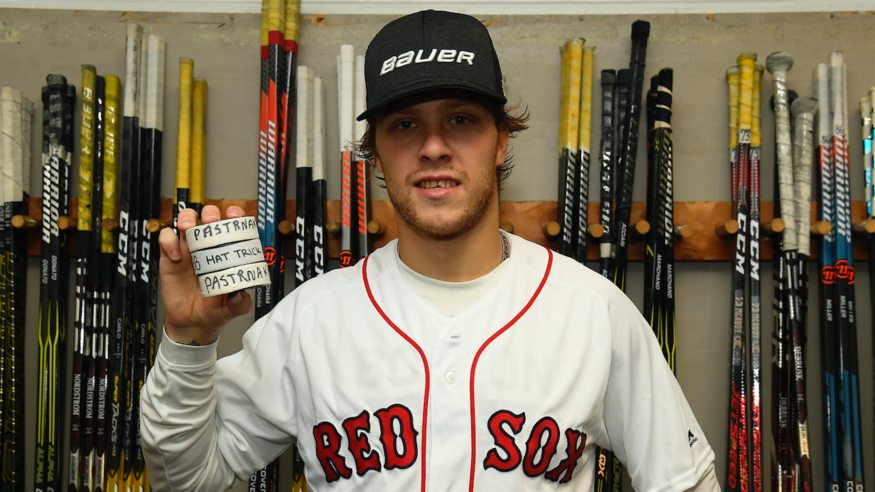 It’s hard to believe but this is Bruins right wing David Pastrnak’s fifth season in the NHL after debuting with Boston in 2014-15. Still, he’s only 22 years old and as we saw in last spring’s playoffs, he is knocking on the door of superstardom. In 12 playoff games vs. Toronto and Tampa Bay, he amassed an incredible six goals and 14 assists. A full off-season (more time for opposing teams to devise ways to stop him) hasn’t fazed him in the least bit as he’s sped out of the gates this fall with seven goals (2nd most in the NHL) and two assists in Boston’s (4-1-0) first five games. Unlike the NFL or NBA where the stars are almost their own entities, it’s harder for NHL players to make their mark in terms of fame outside of their sport but Pasta seems like the rare NHLer that could cross over based on his fun-loving and hilarious nature.

Bruins head coach Bruce Cassidy came about at the perfect time in Pastrnak’s professional career since rather than inhibit his creativity, he seems to appreciate it and want to make it work. It’s tough to imagine that former B’s head coach Claude Julien would be in the same boat since that’s the guy that stunted the growth of former Bruins Phil Kessel and Tyler Seguin who turned into stars once they left Boston (and his over reliance on defensive principles). It also helps that unlike Kessel and Seguin who have never really developed an all-around game, Pastrnak seems much more willing to do the little things that help teams win. The Brad Marchand-Patrice Bergeron-Pastrnak forward line remains the best one in the league and it’s no surprise when you consider how seriously Pasta’s linemates take all aspects of their sport.

“He’s growing up,” noted Cassidy after Pastrnak netted both his 100th career NHL goal and his second hat trick in Saturday’s 8-2 blowout of Detroit (0-3-2) at TD Garden. “He’s trying to get everyone involved and that’s part of being a good teammate. In the second period he had a turnover and he really hustled back. Parts of his game are growing and his shot is too.”

A native of the Czech Republic, English isn’t Pastrnak’s first language but he’s already picked it up well enough to make him one of the go-to Bruins in the locker room for a unique quote. Often times, he leaves the media laughing with his quirky humor that’s only accentuated by his chipped tooth, mop of hair and sleeve of tattoos. So far after most games this season-a flashy dresser to begin with (witness the suits and hats that he wore last postseason)-he can be found wearing a Celtics warmup jersey and he’s a must-follow on Twitter for his Boston sports observations and general chirps.

Pastrnak has gotten this far by focusing on the details so he’s not going to change his process by this point. “I just go out there and play hockey and enjoy every moment on the ice. I’m trying to get better every practice and every game and just having fun. I love the game and I’m not focusing on if I’m going to score a goal or three.”

He’s already one of the most offensively gifted Bruins in franchise history as evidenced by incredible plays like his goal vs. Edmonton and the effortless hat trick against the Red Wings. For that reason alone not to mention who he is as a person, there’s plenty to be excited about when it comes to Pastrnak’s career in Black and Gold.