Many people shun GMOs – food that has been genetically modified – but what about GMO babies?

A recent survey asked 500 American and 500 European parents or those who planned to be parents some day if they would genetically alter their offspring and how much money they would pay for the “perfect” child.

The idea might seem unsavory to some – eugenics will forever be linked to Hitler and his crazed mission to create a “master race” – but this sort of technology isn’t too far off, considering that science has mastered cloning animals.

Cloning humans successfully became less of a dream (nightmare, to some) after science figured out how to clone a human embryo to make stem cells.

If given the chance, would you alter your baby’s DNA to make him or her smarter, stronger or blue-eyed? Of those who believe genetically designing a child would be unethical, one out of five admitted they would still modify the baby for intelligence while a third would give their child’s DNA a boost to ensure good health.

Both groups would also modify creativity and weight; 7 percent of participants with ethical concerns voted for kindness while 8 percent of those without qualms voted to make their child more attractive. 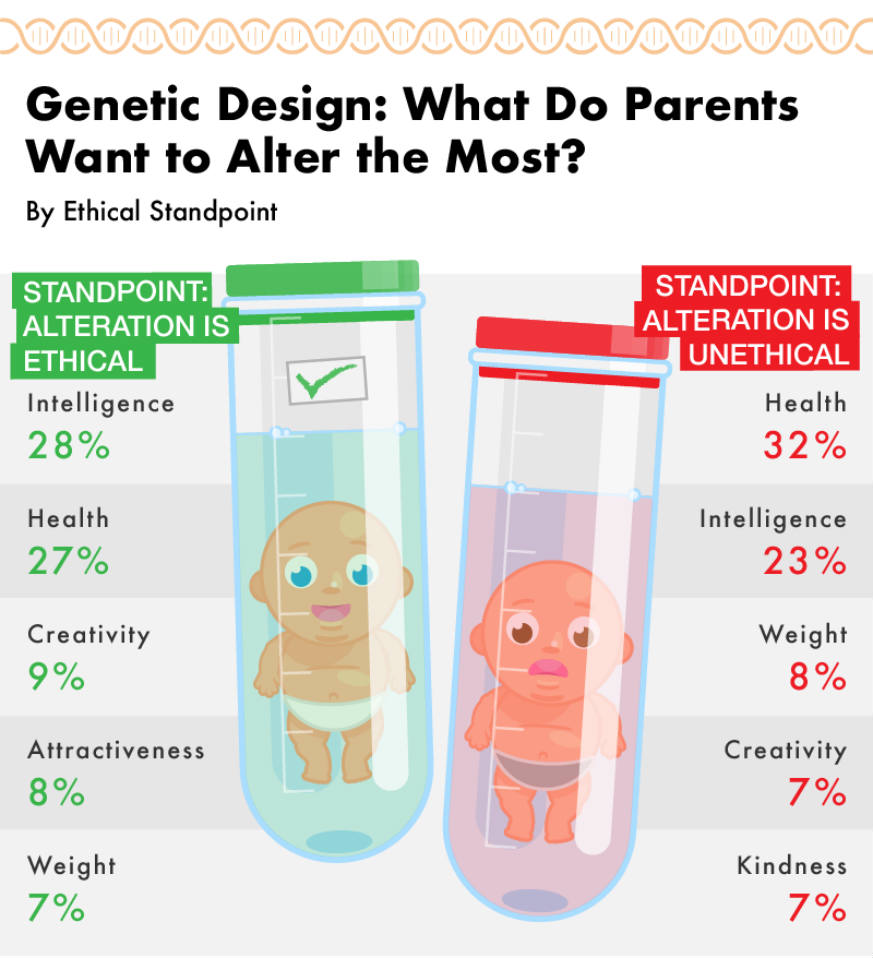 Half of the men and half of the women agreed that intelligence is a trait they would alter, and they also agreed on the importance of creativity and kindness.

Moms and dads differed when it came to other traits: One in 10 men ranked courage in their top five preferred traits while women voted for independence and charisma.

Maybe moms are hoping for their child to become POTUS. If Kanye wins 2020, let’s all just agree anything is possible.

Around one in four potential moms and dads were willing to alter things like attractiveness and weight (because pizza is amazing and counting calories is the worst, right?).

Men wanted their kids to “be like Mike” and know like “Bo knows” with increased strength and athleticism, while moms preferred to dictate eye color.

Americans and their friends across the pond agreed “bigly” on the importance of intelligence, followed by creativity, but when given a list of changeable traits, Americans placed more importance on independence while Europeans opted for courage. Considering both cultures, those choices make sense; Americans value independence while Europeans are in closer proximity to other cultures and might need to call upon courage to learn and engage.

Regardless of continent, a quarter of those surveyed said they would opt to alter attractiveness and weight. Americans were more concerned about athletic ability than their European counterparts.

Money is no option.

Men, and Americans in general, were willing to shell out quite a few clams for a smarter baby; one in four were willing to drop around $10,000 for a kid who does better in school.

Women and Europeans went Jimmy McMillian (“the rent is too damn high”) and were only willing to fork over between $1,000 and $2,000.

More than a third of all men and women surveyed agreed a health upgrade would be worth $10,000 or more.

She’s got the look.

What is it worth to you?