They may look like harmless invertebrates, but there are some dangerous jellyfish that can hurt you — a lot. That includes the clinging jellyfish, a hydrozoan recently discovered for the first time in high numbers in Barnegat Bay.

“Most things, the pain starts to subside after a while,” said Montclair State University professor Dr. Paul Bologna. “The people that have been stung by these clinging jellies, it’s painful to start, but then the pain doesn’t go away. It just slowly ratchets itself up, until they’re like, ‘I’ve got to go to the ER, I’m in that much pain.'”

About 40 clinging jellyfish (Gonionemus vertens) were discovered on July 9 in Tices Shoal near Island Beach State Park, a bay frequented by boaters, by Bologna and New Jersey Department of Environmental Protection research scientists working to track the origin of the attacks that hospitalized two boaters.

“We navigated to the point where the guy said he got stung, and my student, the very first sweep, he pulls one up,” Bologna said. “That never happens.”

Two clinging jellyfish attacks were reported around Tices Shoal on boaters who had jumped off their boats into shallow water – and immediately gotten stung. One attack was on July 4, the other on July 8. Both boaters were hospitalized and treated with morphine for the excruciating pain.

“The clinging jellyfish is native to the Pacific. The first occurrence in New Jersey was in 2016. So we really don’t know much about them,” Bologna said, noting that most sightings were near Shrewsbury. “2018 was the first time we found them in Barnegat Bay, and we found them in really high numbers down here.”

The quarter-size clinging jellyfish’s tentacles are filled with stinging cells that can release potent paralysis toxins and neurotoxins, intended to incapacitate the prey they feed on.

“When you encounter them in open water, they’ve got tentacles that are 15 to 25 feet long, and when you try to brush them away they just get wrapped around your arms and your legs,” Bologna said. “You get an active dose of the toxins going into you. It’s going to kill your skin, and it leaves really nasty scarring all over you. That is when they’re really dangerous.”

Bologna urged members of the public who see dangerous jellyfish to report them to the New Jersey Jellyspotters Facebook group, or to email him directly with a photo and the location of the sighting at bolognap@montclair.edu. 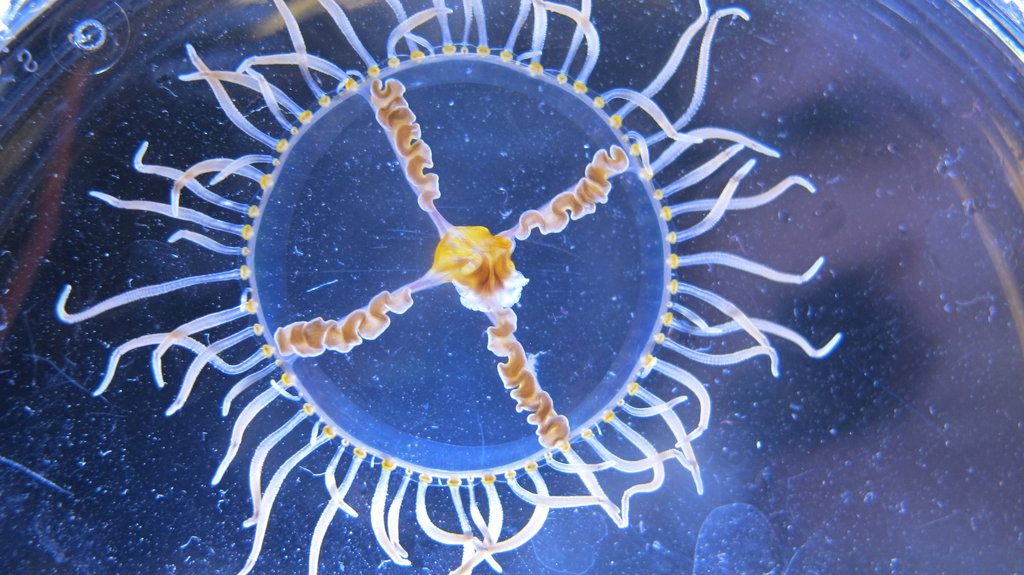 Bio-invasion of the clinging jellyfish?

Clinging jellyfish are believed to have appeared in the Atlantic Ocean through attaching themselves to commercial ships. The first clinging jellyfish discovered in New Jersey were DNA-matched to a variety common to the China Sea, according to a paper Bologna and fellow researchers authored on the 2016 invasion.

Other rare and dangerous jellyfish like the Portuguese man o’ war (Physalia physalis), also known as the “blue bottle” or “floating terror,” have been spotted in the past four years on the Jersey Shore. Believed to migrate around the globe on gusts of current, recent sightings of the man-o-war have been on beaches in Lavallette, Wildwood, and Cape May County.

The man o’ war, previously spotted in 2015 in Harvey Cedars Beach and in Stone Harbor, can cause extreme pain, fever, shock, lung and heart problems, and even death. But no man o’ war victims have been reported yet in New Jersey.

“The little clinging jellies are the ones that are sending people to the hospital,” Bologna said. “Those guys are really nasty.”

If you get stung by a venomous jellyfish

– Don’t pee on the wound; that is a false urban legend.

– Rinse it off with saltwater and use that to wipe off any remaining cells on your skin.

– Depending on the level of pain, apply a hot compress, take over-the-counter painkillers, or seek medical attention.