Chelsea Wolfe is ready to occupy a much quieter space. For years, metal’s favorite not-quite-folk artist has been touring and performing on bills that have leaned towards the heavier variety silencing rooms with her hauntingly beautiful voice. On her sixth full-length album, “Birth of Violence”, the singer-songwriter needed a break from the crushing volume of her previous album, “Hiss Spun”, and was looking to create an album that puts an emphasis on her voice and writing as opposed to heavy arrangements. This time around, she recorded these stripped-down folk-leaning songs at her new home in Northern California with her longtime collaborator, Ben Chisholm. As a result, “Violence” is one of Wolfe’s most affecting and direct albums to date. I spoke with Wolfe over the phone about the new album and reconnecting with her voice away from the thunderous feedback from the amps on stage. 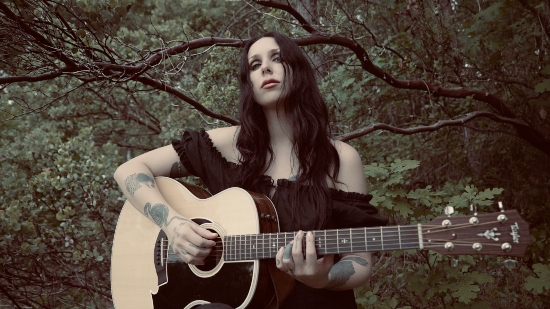 The new record is kind of a departure for you, especially from how heavy the arrangements were on your last record, ‘Hiss Spun’. Could you tell me a little bit about the recording and writing process this time around?

Chelsea Wolfe: Yeah, it really stems from the contrast of making this really heavy rock record, touring a lot, after about eight years of constant touring as well. So I don’t know something kind of just started to nag at me last year that I really needed to take a break and really take stock of my physical and mental health. And just daydreaming about being at home and I think the songs that became Birth of Violence sort of stems from that. I would just find a quiet place when I could. I started writing these songs, I felt very much a calm energy in the midst of the storm of “tour”.

So, it was almost like transitioning your home life onto the stage or onto a record in a way?

Chelsea Wolfe: I think so. Just the experiences that I’ve had and a lot of it is about being on the road and being in constant motion. But yeah, I think it kind of comes back to finding a place to call home. I knew I didn’t want to have to travel for this record, so it’s a very DIY setup. And I did it with my bandmate in my home. And it was really special to take the time to settle into this home that I have lived in for two or three years ago but didn’t really have the time to be there very much yet. So yeah, settling into it by making a record there was a really special experience.

With the sheer volume of “Hiss Spun”, I can totally understand where you’re coming. Did you have the urge to strip everything down to reconnect with the roots of songwriting and understanding how to use your own voice with a quieter record?

Chelsea Wolfe: Yeah, because the bridge to each song was whatever that song needed. And I think a lot of it was bringing out the joy of singing in a way. And not having … I don’t know. I wrote a lot of these [songs] in a very acoustic way. “Hiss Spun” was very much the band getting together and jamming and rock and roll and that kind of energy. Which was super fun and that record was an exorcism for me and I got a lot of personal things out that I hadn’t talked about before. So it was kind of the beginning of the feelings that I really needed to hone in on during “Birth of Violence”. So it is very healing to play acoustic guitar and sing in a quiet room and experiment with your voice.

You’ve been working with your bandmate and musical collaborator Ben Chisholm for so long now. How has that relationship strengthened over time?

Chelsea Wolfe: I feel like we’re just lucky to find a collaborator that we can really just feel comfortable writing with and writing in front of. And from day one when we tried playing music together ten or so years ago, we just instantly connected that way. And even though some of our influences are different, just instinctually we have these ways of flowing and going back and forth with each other and making these songs and stuff. I basically brought him in to co-produce it and because I know that he takes the scale to the end of the song and really gives it this place to live. I keep using this metaphor, but it just reminds me of my home. And that’s like the song. The production that Ben [provides] … It’s like the mountain and the trees around it, it really gives it a place to live. I told him from day one that I wanted it to be like space-western, like have this old country culture, but also have this big spacey feel. Where it could be a little futuristic as well. Kind of bringing together the past and the future. And I just think that we really emphasized that.

The song “Little Graves” is such a powerful commentary on gun reform with the line, “You can’t fight guns with guns, we’ll all perish that way.” Was the concept of this song something that came to you instantly or was it one that took time to properly voice?

Chelsea Wolfe: No, something I thought that very much came to me. Obviously there have been so many school shootings in America and it’s a problem here. Even though I haven’t been affected directly, like I don’t know anyone in the situations, it still affects me and makes me incredibly sad. And I just heard about one of them and then the President responded by saying, “We should arm teachers.” That’s where that line comes from though. You can’t fight guns with guns. But sometimes I will write a song like that … Something like that came to me pretty quickly. It wasn’t something that I have been working on for a long time. And I wasn’t sure if I should have included it, but people that heard it also really connected to it and felt like it was something that more people would appreciate.

Make sure to catch Chelsea Wolfe on tour this Fall.