Chicago deep dish vs. the New York slice: Which pizza is better? - Metro US
Today’s Debate

Chicago deep dish vs. the New York slice: Which pizza is better? As a New Yorker, I treat our Pizza like it has rejuvenating powers that can’t be reproduced anywhere else. But even NYC purists have to admit that this kind of admiration for the New York slice has always been weirdly just “understood” rather than backed up. Many faithful to the cause even go as far as to say that New York Pizza is better than the rustic recipes being rolled out in Italy where the cuisine was created. I’m guilty of this, but then again so are diehard lovers of Chicago deep dish.

We know that NYC expats complain about the pizza in L.A., and some restaurants will ship in New York water to create the same dough consistency. I once even caught myself in Berlin refusing to try their pizza even though Germany is closer to the source than New York by a longshot. But what about other cities in the U.S.? Surely the tri-state area can’t be the only great place to get pizza. So, what about Chicago? Chi-town seems to have a certain amount of pride when it comes to their monstrous Chicago deep dish take on this sacred cuisine. Understandably, the Chicago deep dish vs New York slice debate has raged for years.

So I put aside my slice bias and travelled to the Windy City to see what all of the fuss is about surrounding Chicago deep dish pizza — with an open mind! 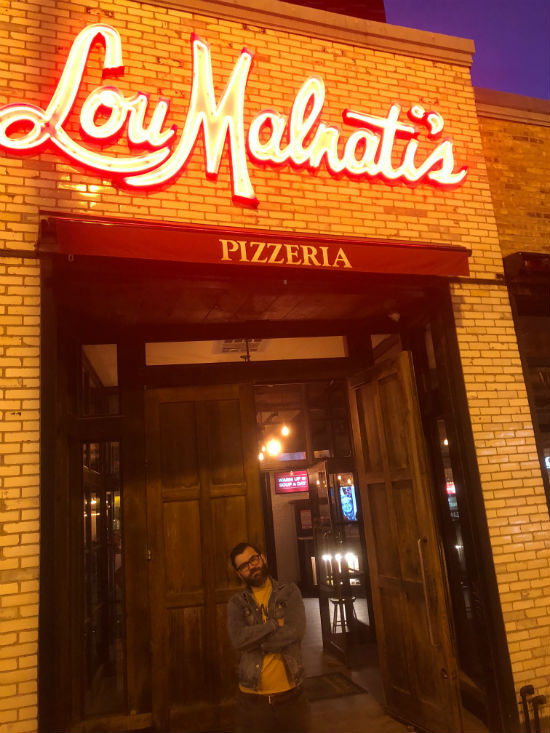 To take this challenge seriously, my wife and I made plans for a long weekend trip to Chicago to visit my brother and his girlfriend who live in the fun little neighborhood of Andersonville. Of course, we would do the normal vacation sightseeing, boozing and eating that usually coincides with an adventure like this. But, all the while the Chicago deep dish pizza loomed largely in my mind. I would bring it up wherever we went and after every meal we had. “Mmm, that bowl of pasta was great. But man, could I go for a Chicago deep dish right now,” I would say in a joking manner.

My brother, Grady, called my bluff right away and we made plans to check out the wildly popular “pizzeria” Lou Malnati’s on the second night of our trip. The eponymous chef at Malnati’s had been one of the forefathers and innovators of the Chicago deep dish in the early 1940’s and his famous recipe had helped to create one of the biggest pizza chains in the city. I thought this would be a perfect place to try the Chicago deep dish in its purest form. And if I hated it, the easiest way for me to write off the whole concept in one fell swoop. When we sat down, we all decided that we would order a large version of Lou’s namesake pizza “The Malnati Chicago Classic” with “Lou’s lean sausage, some extra cheese and vine-ripened tomato sauce on Buttercrust.” The menu stated that the pizza “served four people” so we figured it would be fine. But then it arrived … 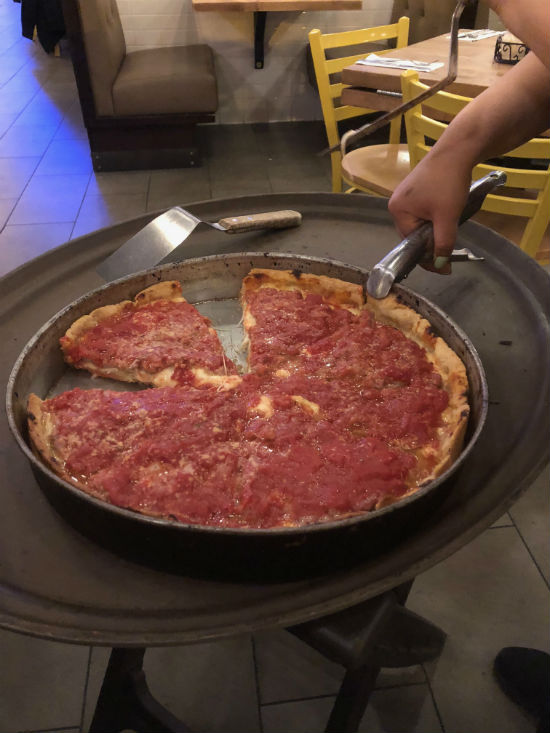 To say that this thing could “feed four” seemed like it was the lower end of a “feeds four to twenty people” warning. But how was it? Let’s go through the Chicago deep dish layer by layer.

The flakey “Buttercrust” keeping this whole thing together was the most alien thing to me about the Chicago deep dish. Unlike the crunchy thin crust at some New York pizzerias, this crust fell apart like how I imagine a large garlic-y Ritz cracker would under the weight of toppings. This is not to say it wasn’t delicious. But the constitution gave it more of a casserole feel than a foldable, on-the-go meal to which New Yorkers are accustomed.

The cheese on the Chicago deep dish seems more like a binding agent than the star of the show. As the first layer after the crust, the amount of cheese needed to keep the sauce and grease from seeping into the crust and creating a soupy mess and is absolutely necessary to giving each pie a definitive shape.

With our pizza, we decided to go with sausage and I can’t really recall what it tasted like. I know we ordered sausage, and that it was somewhere in there. This could probably be because of the magic red sauce that it was slathered in…

Because the cast iron that the pizza is cooked in is so deep, the pizza ends up taking a layered cake-like form with the sauce taking on the role of the frosting. This was my favorite part of the pie by far. The thick tomato sauce was perfectly spiced and bubbling hot, giving you a perfect flavor bomb with every bite. Because of the protective shield that the cheese creates over the flaky crust, the sauce is free to meet the top brim of the outer crust like thick and goopy tomato basil soup.

So what was my final verdict? What makes for better pizza: the Chicago deep dish or the classic New York City slice? After this trip and trying the real thing from the source, my answer is not as clear-cut as I initially thought. To be honest, I loved Chicago deep dish. But would I call it “pizza”? That, to me, is a stretch.

To me, pizza is all about how easily you can eat it on the go, and shoveling a hefty slice of Lou Malnati’s while heading anywhere seems like a death sentence. Chicago deep dish seems like a huge undertaking. (Again, our pizza could have easily fed an entire extended family.) Pulling up a chair to one of these pies needs to be a delicious event planned out by a group of friends or loved ones — with nothing of note after or before it. That last part is important; after our meal, I was completely down for the count. Even though I thoroughly enjoyed my meal, I longed for a time when my stomach didn’t feel like it was going to secede from my torso.

That’s what makes the New York slice such a beautiful thing. While delicious, its accessibility makes it easy to take for granted. So while I must say I prefer the lack of commitment and ease of what we have in the five boroughs, I would urge any New Yoker to give Chicago deep dish its just day in court. It may not be “pizza” to us. But whatever it is, it’s pretty damn good.