It’s hard not to get caught up with how scary the current environmental crisis facing our suffering planet is. While many people do their best to make a difference in their day-to-day lives, given their good intentions, they still want to believe that it is all going to work out in the end. In the new zombie horror-comedy “The Dead Don’t Die” by indie-cinema auteur Jim Jarmusch, the filmmaker poses this question over and over again: What if we’re already too far gone to turn back?

The film is centered around three police officers in the town of Centerville, played by Bill Murray, Adam Driver and Chloe Sevigny as they try to battle off a horde of the living dead that have risen from the grave after energy companies have caused the Earth to stop moving on its axis through “polar fracking.” While Driver’s character, Ronnie Peterson, keeps trying to hammer the severity of the situation across by refraining in a classic Jarmusch deadpan, “This is not going to end well,” Sevigny’s Mindy Morrison chooses to keep her head dug into the sand, believing that the evil will all go away — a feeling that mirrors that of many people who choose to disengage with our current situation.

“I said I would sign on even before reading the script,” — Chloë Sevigny on working with Jim Jarmusch for The Dead Don’t Die. 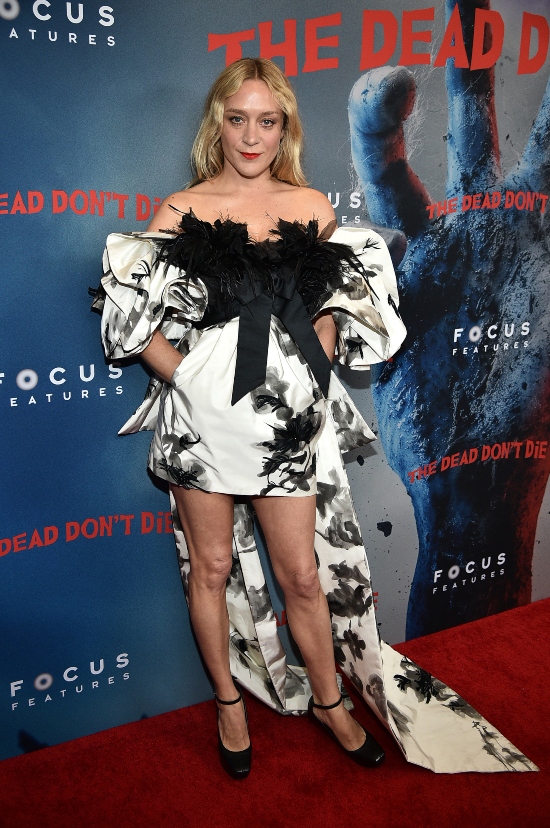 “I was thinking about a lot of those people that are just in denial,” says Sevigny, of channeling that kind of misplaced optimism, as we meet in a hotel suite on a rainy day in SoHo. “Then again, she is driving a Prius and she’s probably doing her part but she’s not fighting capitalism, which is probably the only way. Jim likes to say the environmental crisis isn’t political. But to me, it is. How are we going to change policies? That is the only way we are going to make some sort of  big shift. Of course it’s not political in the fact that yes, we all have to accept that this is happening. It’s daunting and it’s frightening. How does one do that? I compost, I recycle, I try to not use single-use plastic, which is really hard. I’m thinking before every purchase, before I get a disposable fork, to even eat with my hands if I can. Garbage gives me untold anxiety. But, I fly all of the time [laughs]! So, how can we make a difference? It’s terrifying.”

As a strong presence on- and offscreen, Sevigny had a hard time playing into this kind of “damsel in distress” character for the film, but ultimately knew that she would be in the right hands under the direction of Jarmusch.

“I was really nervous that I was going to be the one that nobody was going to pay attention to,” says Sevigny. “I thought he was writing to everyone’s strengths and I was like, what are my strengths? What is he writing here? Who is this person? She is a trope, but it was very hard to access her for me. I was really nervous that I was going to look like I was in a different movie. I was really insecure on the set, actually. Because they are all doing this one thing and I am here trying to keep alive this other thing. I just had to put my trust in Jim and hope he wouldn’t make me look like an a—hole [laughs].”

The film boasts one of the most star-studded and flat-out “cool” casts that Jarmusch has ever assembled onscreen, which is saying something for him. Stars and well-known faces like Selena Gomez, Steve Buscemi, Tilda Swinton, Iggy Pop, Tom Waits and RZA all show up for memorable performances. For Sevigny, she had no idea what the cast would be like going into the film. But given Jarmusch’s track record, he always gets an automatic “yes” when he offers her a role.

“I don’t know if he said anything about the casting,” she says. “He sent me a letter and he said he wanted to make a ridiculous zombie movie. … But I always know that he gets great casts. Over and over, through all of his movies, half of it is the casting. I said I would sign on even before reading the script.”

For Sevigny, being around Tilda Swinton, who plays the otherworldly samurai-sword-wielding Scottish mortician Zelda Winston, was like being in contact with life from another planet. But overall, the friendly atmosphere showed through from a cast of characters who have remained in Jarmusch’s orbit throughout the years.

“She is like a creature from another planet,” says Sevigny of Swinton’s alien elegance. “Just being around her. Just her stature and the way she moves and seeing her wielding that sword … I was just in awe of her and the way she communicates with people. Of course, she had worked with Jim before, and he has most of the same crew around, so she knew all of the people. Same with Adam and same with Bill, and a little bit with me. I had worked with Fred Elms before on “Broken Flowers.” It’s very easygoing. We’re all in the flow. Therefore, there’s an ease and a casualness. It’s nice.”