On Tuesday two of Comedy Central‘s most popular series, Drunk History and Corporate, will premiere the first episodes of their latest seasons. The former, which goes first at 10 p.m. ET, has turned into a laugh-out-loud drunk history lesson featuring some of the funniest and best-known comedians and actors working today. As for Corporate season 2, which premieres right after Drunk History at 10:30 p.m. ET, co-creators and co-stars Matt Ingebretson and Jake Weisman are doing something very different.

Corporate season 2: One of the darkest comedies on TV

This is obviously the case since the scripted dark comedy doesn’t involve feeding celebrity guests alcohol and interviewing them about history, but it’s also so much more than that. With Corporate, and especially with Corporate season 2, Ingebretson and Weisman have somehow found a way to make audiences and critics laugh at some of the most prescient satirical humor about the modern American workplace.

So, what should feel like a humorous escape from everyday life is actually the exact opposite since it reminds viewers about what they’re trying to escape. Then again, they keep coming back, which leaves the co-creators and co-stars wondering just how far, and how dark, they can go in season 2. 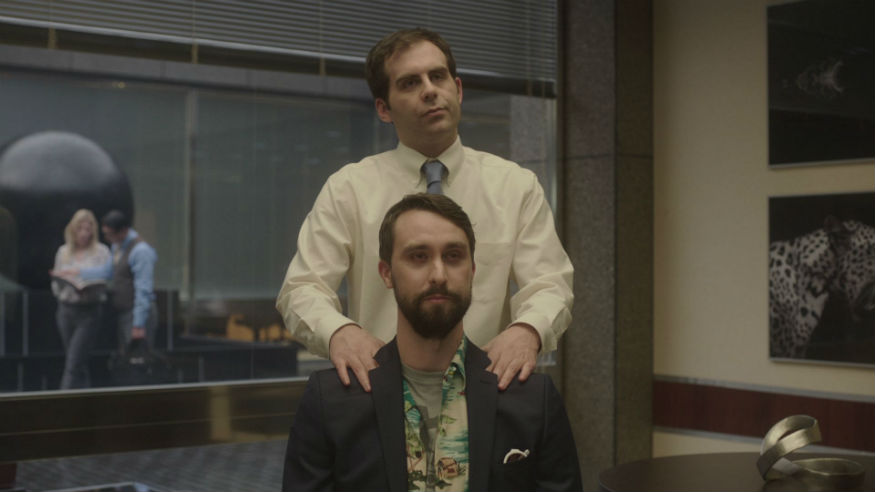 “It’s important to note that we’re never trying to be dark,” Weisman tells Metro. “That’s never our goal. Our goal is to be funny. We just don’t want to shy away from the darker subjects, because so much of what’s going on in America, at work and in your personal life, is really hard and really dark. To avoid talking about those in a real way is a mistake. So we always want it to be funny, but what we find funny is often considered to be dark by other people.”

“A lot of the time,” he continues, “in order to surprise audiences, we have to go far out there. Audiences today have seen everything. There’s just so much access to comedy. They understand the jokes so well. So sometimes, the only twists and turns that will get them are the craziest things they couldn’t think of. Sometimes, what people think is dark is really just the result of good, hard joke writing. That’s when you can’t see what’s coming.”

Corporate has also been helped by the fact that Comedy Central hasn’t wasted any time in supporting Weisman and Ingebretson’s efforts, be it with money or casting.

“Comedy Central basically pulled the trigger on season 2 after they started seeing the first edits we sent in of season 1,” says Ingebretson. “That’s really uncommon these days. I think they were just excited by the work we were turning in and felt confident that it was going to do well. As for season 2, Pat Bishop, Jake and I felt much more confident about what we were doing. We felt that we were much more able to do better the second time around.”

“I think you notice a big difference between the first and second seasons of most shows,” he adds. “It’s literally just because the creators are learning what the show is in season 1. After that, they can kind of explore the concept a bit more in the second season.”

In conclusion, Ingebretson then compares his, Weisman and Bishop’s efforts to the “classic example” of Seinfeld. “If you watch the first season, it’s fine, but it definitely isn’t the show that it became. It’s a relief whenever a network trusts you enough to let you explore the show and find its voice. Comedy Central is letting us do that, so far.”