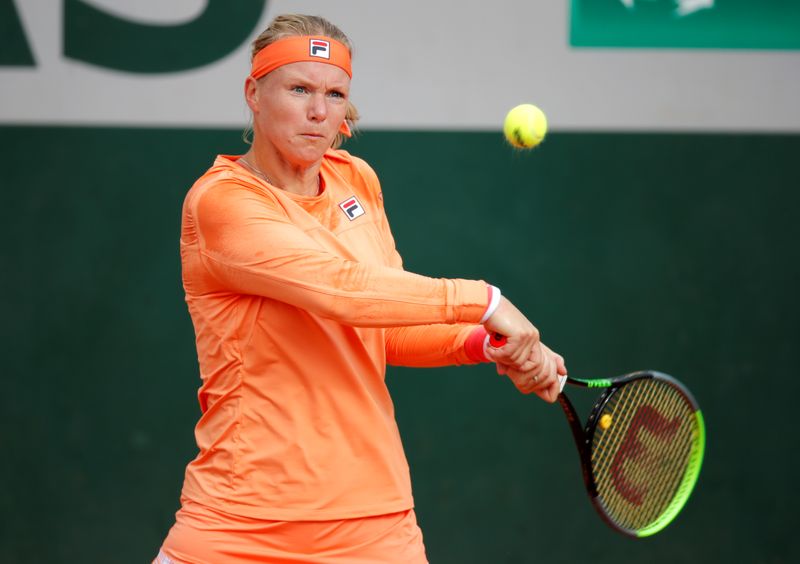 PARIS (Reuters) – Fifth seed Kiki Bertens narrowly avoided joining the exodus of French Open women’s favourites as she survived a match point and cramps against former runner-up Sara Errani before hobbling into the third round on Wednesday.

Bertens eventually won 7-6(5) 3-6 9-7 in a claycourt duel lasting more than three hours but she left the court in a wheelchair after struggling physically in the final set.

The 28-year-old said she had suffered a full-body cramp when she got back to her chair after the match and needed 45 minutes of treatment in the locker room.

The 33-year-old Errani, who came through qualifying to start her first Grand Slam for two years after a doping ban, served for the match three times.

She tried every trick in her arsenal including some dinked underarm serves on occasions but Bertens stood firm despite appearing on the verge of collapse on occasions.

Errani’s serve is one of the weakest on Tour and it failed her at 5-4, 6-5 and 7-6 as she became increasingly vociferous, repeatedly yelling ‘vamos’ after points.

At 6-5 she brought up a match point with a killer drop shot but Bertens saved it with an angled forehand winner.

Bertens summoned all her energy to eventually hold serve to lead 8-7 in the decider and had triple match point in the next game, only for Errani to save them all.

However, Bertens got another opportunity and this time scrambled over the line to post her only victory over Errani in six attempts. The orange-clad Bertens collapsed onto the clay, shaking with emotion, as 2012 runner-up Errani stalked off without acknowledging her opponent.

Bertens reached the semi-final in 2016 but is short of match play coming into Roland Garros having failed to win a match since the Tour resumed after the COVID-19 shutdown.