The idea of a split within the Portland Trail Blazers’ talented backcourt continues to gain traction, this time with star point guard Damian Lillard.

After his backcourt-mate and shooting guard, CJ McCollum had been linked to a trade earlier this summer, there are rumors swirling that Lillard could be making his way out of town.

On ESPN’s First Take on Thursday morning, Stephen A. Smith revealed that Lillard could be looking to apply his trade in a larger market, whether that was with the New York Knicks or the Los Angeles Lakers.

Stephen A. Smith says on First Take that Damian Lillard would want to go to the #Knicks or #Lakers. Would go on to say he would take NY over LA. #NBA pic.twitter.com/PPsz4oxN9b

He would go on to say that Lillard would prefer to play for the Knicks over the Lakers.

The only way that could happen is if the Blazers decide to trade away the star as Lillard is under contract through the 2020-21 season. There have been no confirmed reports of Portland management entertaining such talks though. 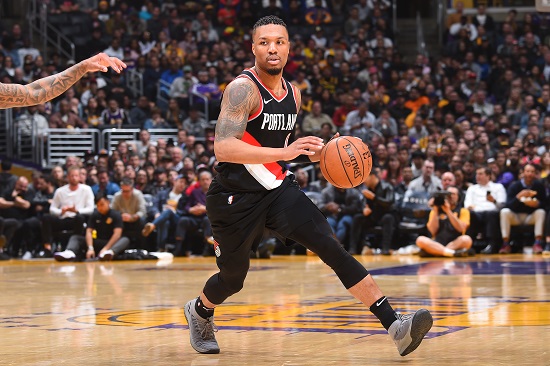 It would be a difficult pill for Blazers fans to swallow seeing their star player shipped out of town seeing as the 28-year-old has developed into one of the best guards in the game, although he’s been overshadowed in a loaded Western Conference by the likes of Stephen Curry.

Over the past two years, Lillard is averaging 26.9 points and 6.2 assists per game as he and McCollum are one of the most offensively gifted backcourts in basketball.

However, they’ve been unable to attain any sort of postseason success as they were bounced out of the first round in each of the past two seasons, last year getting swept by the New Orleans Pelicans.

Their flat performances in the playoffs have brought about the idea of shaking up the roster, though McCollum’s name had been more prevalent in trade talks.

But with Lillard’s sudden reported desire to look for a new home, there could be major problems in Portland.

Damian Lillard to Knicks or Lakers?

While the Knicks might be Lillard’s preferred new home, it would be a tad more difficult for the Knicks to acquire such a player. It’s doubtful the team would be willing to part with the likes of Kevin Knox, who lit it up in the Summer League after being drafted ninth overall in June. Obviously, it’s safe to assume that Kristaps Porzingis would be off the table as well.

The only real assets the Knicks would be able to offer are draft picks, which is something the team has done before in the past and it’s gone on to damage their future. With two max-salary roster slots slated for next summer though, the Knicks are expected to be major players in free agency where they could go after a point guard like Kyrie Irving. It would make a trade for Lillard seem excessive seeing as New York wouldn’t have to give up anything for a premier talent like Irving.

As for the Lakers, hypothetically going after Lillard would show an abandonment of the young Lonzo Ball. However, it would bring further legitimacy to a franchise that is on the way up after signing LeBron James and being connected with Kawhi Leonard in free agency next year.