Dan Auerbach on the return of the Black Keys Dan Auerbach and Patrick Carney are like those friends of yours who take long relaxing vacations only to remain connected to their work while they are lounging by the pool. Even though their arena-filling rock band, The Black Keys, had been on a “break” in the 5-year span before the release of this year’s “Let’s Rock,” the two restless and adventurous musicians had hardly been taking it easy.

“Pat said that he and I together have produced something like 60 records in the past 5 or 6 years,” says Dan Auerbach, the band’s lead singer and guitarist, with a laugh. “I didn’t realize that until he told me that. It’s not like we weren’t doing anything in that time. But we definitely needed a break.”

While in recent years fans haven’t been treated to that Black Keys release to rattle their car speakers, Auerbach and Carney have both been ever-present in shaping records by such popular artists as Cage The Elephant and Michelle Branch, as well as numerous recording projects and songwriting credits.

“We’re always looking for a new sound. We never want to do what we did before. That’s the reason why we’re still here. I think that if we were just making the same record over and over again we probably would have stopped a long time ago,”

– Dan Auerbach of The Black Keys 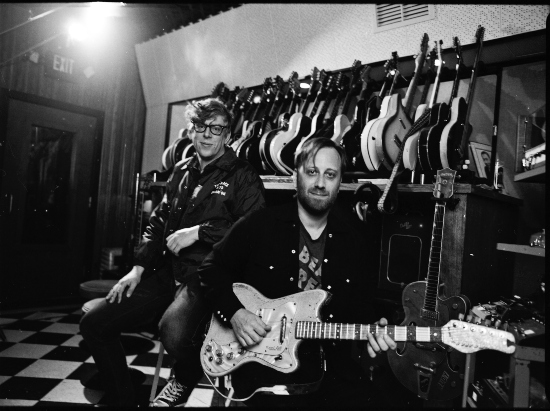 With their last album “Turn Blue” in 2015, the band had reached a sort of apex that fans of the band’s earlier work may have never imagined from their rough lo-fi days that saw the Akron, Ohio duo bashing out blues riffs in their garage. In fact, it was a logical continuation of the direction the band had started on when they began working with producer Dange Mouse for their album “Attack and Release” in 2008. Ever since then, they have shifted from being the small band that the indie kids cherished, into one of the most dynamic forces in popular music, melding instantly recognizable blues-based garage rock while injecting a healthy dose of psychedelia. Furthermore, The Black Keys are one of the bands making the case for guitar-driven rock and roll at a time when like-minded groups are few and far between.

But time off wasn’t something that dulled the band’s creative drive. As Auerbach explains, the only hurdle in the way of making “Let’s Rock” was actually getting into a room together with Carney to make it. By that measure, you can almost read into the title as both members getting into position and saying those words in jinx-like fashion: “Let’s Rock.”

“It was pretty simple. Pat and I just got together and started recording. We didn’t really talk about it. We just got to work. It felt like the less we talked about it, the better,” says Auerbach.

The resulting album finds the middle distance between the sprawling acid-soaked guitar heroics on “Turn Blue” with the direct power and tunefulness of albums like “Brothers” and “El Camino.” And with 12 more songs in the group’s arsenal, Auerbach and Carney are getting back into what it really means to have The Black Keys be an active band again.

“The thing is, you can’t just make a record,” says Auerbach. “We have to make a record and then we have to dedicate at least two years of our lives to touring and promoting. We stopped touring because it’s just not healthy. We had to commit to the idea of getting out there. Which is where we are today.”

Ever since songs like “Lonely Boy” and “Gold on the Ceiling” from the 2011 album “El Camino” seemed to dominate the world, the band has become a hit-making force to be reckoned with and their fingerprint is one that should not be downplayed as one of the most important influences in popular music. Can you honestly remember a time when a Black Keys song wasn’t played as bumper music to a sports broadcast or their likeness wasn’t used in a car commercial? While hearing their own music on the radio or being used by various outlets is humbling, Auerbach is a little less enthusiastic about the cheap imitators that sprung up in the wake of their success.

“There is so much of that because the TV stations or the channels or corporations, they don’t want to pay to use our songs so they pay someone to do like a sh–ty f–king version of ‘Howlin’ For You.’ There’s a million of those that we hear constantly. There was this one guy who was so f–king stupid. He owned a casino or something. He bragged on Facebook [and said] ‘check this out, I had these guys rip off a Black Keys song for my new commercial. What do you think?’ We took a screenshot and sent it to a lawyer and sued him. What a f–king idiot!”

But as the saying goes, imitation is the best form of flattery. So, at least there is a silver lining to all of this?

“The thing that I like is that it sounds so sh–ty it makes me feel good about us,” Auerbach says. “It’s like muzak versions of our songs. We should just acquire the rights to a bunch of Black Keys rip-off songs and make a compilation [laughs].”

It’s always commendable when a band can maintain its large and loyal fan base while taking continuous risks with every record release. Auerbach understands this and is thankful for their fans being open to the band’s need to expand their sound each time they step into the studio.

“We’re always looking for a new sound. We never want to do what we did before. That’s the reason why we’re still here. I think that if we were just making the same record over and over again we probably would have stopped a long time ago,” says Auerbach. “I hope that they appreciate and enjoy the twists and turns. Ultimately, I’m not thinking about anything but the music when we’re making a record. It’s the only thing I’m thinking about.”

Make sure to catch The Black Keys on the road this Fall with support from Modest Mouse.