We all know that age old saying “art imitates life”. But the testament to truly great art is if that work can be translated throughout history time and time again. The musical Desperate Measures has been able to do that with its critiques on powerful men abusing their power without any disregard for the people they hurt for their own gain. Sound a little familiar? The story, with books and lyrics written by Peter Kellogg and music by David Friedman, is an updated telling of Shakespeare’s Measure For Measure as a western and just came off of a sold-out run at the York Theatre.

Desperate Measures — now showing off-broadway at New World Stages — follows an outlaw named Johnny Blood who is set to hang and an authoritarian Governor who is hell bent on sending him to hang unless he can sleep with Johnny’s nun sister, Sister Mary Jo. A plan is hatched to have her go through with it but to have her switch places with a lady of the night in order to fool the governor and free Johnny. We caught up with the play’s star Lauren Molina who plays Bella the “hooker with a heart of gold” who must sleep with the evil Governor in order to save the life of her love, Johnny blood. 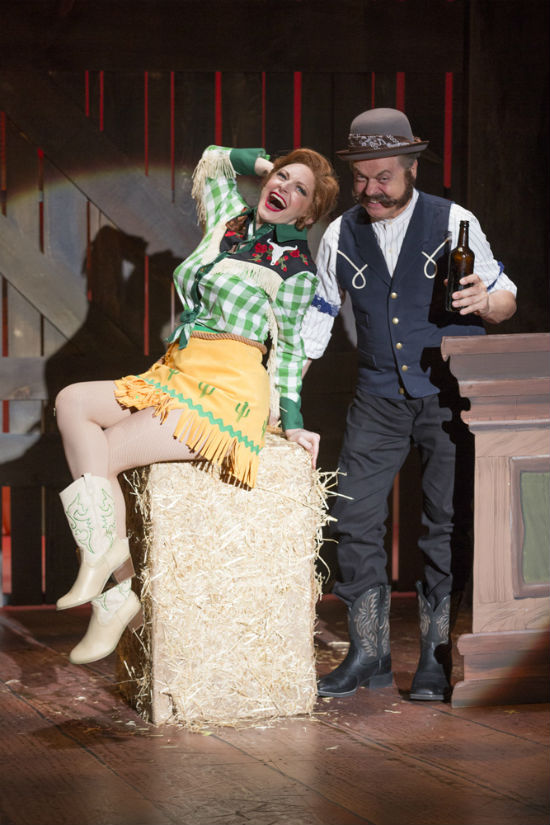 What drew you to the play in the first place?

Well, I was fortunate enough to get asked to be a part of the initial reading last year at the York Theater. Peter Kellogg, the writer, had seen my work. Funny enough he had not really seen me in a comedic roll but he had seen me in Sweeney Todd years ago on Broadway and he knew that I was involved in my comedy rock band the Skivvies. So, he thought I would do a good job in taking the role of Bella who is a ‘Hooker with a heart of gold’ and has really fun belty numbers and is technically a stripper. He invited me to be a part of the project and it was a huge success when we did the reading. It just so happened that there was an opportunity at the York Theatre — a show fell through in the Fall. So, there was an open slot and the creative team and the producers jumped on board to raise money and make the production happen. I was just, as they say, “#blessed” to have that good luck and good fortune to be involved in the reading and they liked me enough to keep me for the full production.

The play does a great trick that is very similar to something that the Coen Brothers were able to do with Raising Arizona, where they told a complicated story about morality through the eyes of … not the brightest characters.

Absolutely! I think that’s a great comparison. I think any time you take the themes and the plot and structure of a shakespeare piece and update it, you’ve got a lot of potential. You can look at how the Lion King is Hamlet or West Side Story is Romeo and Juliet. With Desperate Measures they just kind of streamlined the story, clarified plot points that were sort of confusing and complex, and used the tropes of the western with all of the different characters. You’ve got the good guy, the bad guy, the good girl, the bad girl, the sheriff, the evil corrupt governor, and they’re telling the story in ways that are really digestible and, frankly, really fun and clever.

The story is really translatable.

I think they’ve done an incredible job with something that has very serious topics and very uncomfortable topics that they can be addressed in a way that we can think about them and feel angry and mad and sad and just understand the plight of these people but also find the humor in the absurdity and hypocrisy in it all.

And it really relates to what is going on today in terms of powerful men abusing their power.

It’s truly timeless. It reminds me of Voltaire and Candide in some ways with hypocrisy in religion and how power corrupts. Especially how Men feel they can get away with anything especially if they’re in a powerful position. Obviously we have Trumpian themes and the Governor kind of reflects that in his role. I feel like I’m kind of like the Stormy Daniels who saves the day! Even though she might be thought of in the world as a prostitute or has a job that people are not proud of, she actually is the one who is working hard and saving money. She’s a forward thinker. She’s a free spirit. She’s the one who follows her heart even if it breaks the law to get the job done and save Johnny Blood.

We have a long history of dismissing sex workers in society and in this play, your character Bella is perhaps the strongest character.

I definitely think that is a great conversation to be having. Bella is very sex positive. I try to approach her character that she hasn’t been victimized and she hasn’t experienced that. And if she has been victimized, she has turned the tables and gotten her revenge (laughs).

How far along were you into the production when the news about Stormy Daniels broke?

The first time we were doing the production at the York Theater was when the Harvey Weinstein allegations came out back in the Fall. The day after that news broke you could just feel the collective groaning and rage from the audience as the governor propositioned Susanna “If you have sex with me then I’ll free your brother”. It really kind of made it extra current. Then the Stormy Daniels thing hit back in June. It was right as we were beginning our run at New World Stages and I was just like ‘Yeah, that’s my girl!” Turn it around!

It’s a testament to the power of the material!

With this piece I hesitated for a while to be like well, it’s based on Shakespeare. Because you don’t need to know anything about Shakespeare to follow this. It’s such a simple story about saving one man’s life through a little switcheroo of characters in what they call a ‘bed trick’. It’s extra special if you know the source material but it’s not necessary.

You need as much familiarity to the Shakespeare story as you do with Bugs Bunny cartoons!

For performances and ticket information for Desperate Measures, visit desperatemeasuresmusical.com/