Despots around the world have adopted Trump’s ‘fake news’ refrain President Trump has made no secret of his affection for authoritarian rulers, and they’re returning the love: Despots around the world have adopted his practice of calling unfavorable stories “fake news.”

At least 15 authoritarian leaders have begun to use the phrase to attack free speech and human rights in their countries, Politico reports. “I’m seeing it more and more,” said Joel Simon, executive director of the Committee to Protect Journalists. Trump “is providing a context and framework for all sorts of authoritarian leaders—or democratic leaders and others who are dissatisfied or upset by critical media coverage—to undermine and discredit reporting.”

Some of Politico’s findings:

— In February, Syrian President Bashar Assad dismissed an Amnesty International report that 13,000 people had been killed in one of his military prisons by saying, “You can forge anything these days. We are living in a fake news era.”

— Philippine President Rodrigo Duterte has complained of being “demonized” by “fake news.” Last month, he called reporters “spies” while Trump laughed alongside him. 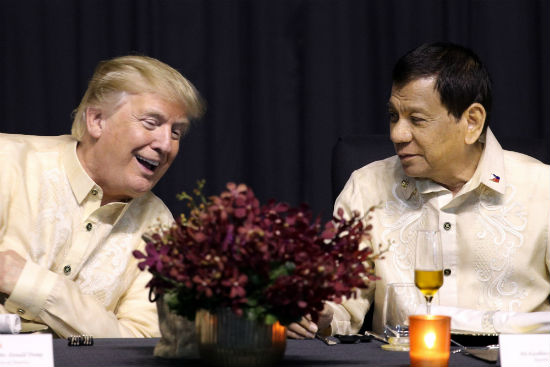 Trump and Duterte pictured laughing together above. Photo: Getty Images

— Irony: In July, Venezuelan President Nicolas Maduro complained to RT, the Russian state-owned propaganda outlet, that the media had “spread lots of false versions, lots of lies” about his country. “This is what we call ‘fake news’ today, isn’t it?” he said.

— Last weekend, an official in Myanmar said, “There is no such thing as Rohingya. It is fake news,” referring to the persecuted ethnic group.

— In March, Chinese state media claimed that a prominent human-rights activist’s account of torture was “fake news.” In May, the People’s Daily newspaper ran an op-ed with the headline, “Trump is right, fake news is the enemy, something China has known for years.”

“These governments, they’re pushing the boundaries of what it’s possible to get away with in terms of controlling their national media,” said Steve Coll, the dean of Columbia Journalism School. “And there’s no question that this kind of speech makes it easier for them to stretch those boundaries.”