Do you need to have seen Transformers to see Bumblebee? Is Bumblebee a reboot? Here’s what we know - Metro US
Movies

Do you need to have seen Transformers to see Bumblebee? Is Bumblebee a reboot? Here’s what we know

While Bumblebee was originally touted as a prequel to the first five Transformers movies, it seems as though the film’s connection to its predecessors is actually much more tenuous that we thought.

In fact, for the moment, it is still undefined.

“The Last Knight was the last in the Bay series,” producer Lorenzo diBonaventura explains to Metro, while writer Christina Hodson adds, “Lorenzo has told me that he doesn’t see it as a reboot. Because that sounds like you’re doing the whole thing again.”

“It is just its own separate thing and we’ll see what happens with it. We haven’t been worried about labels.”

Is Bumblebee a Transformers reboot?

Hodson stresses that when it came to writing Bumblebee the producing team told her to just focus on creating the best movie possible rather than trying to connect it to the franchise’s past.

“I just freed myself from it. The producers and studio told me not worry about other things,” she explains. “That was their job. I just focused on the one piece that I was focused on. Which was this one story between Charlie and Bumblebee. I had a clear sense of creating a silly, fun and intimate story.”

“It was superbly important sure that you did not to have seen any other movies to see Bumblebee. Or have seen the cartoon,” adds diBonaventura. “That was a big part of the decision making process. We picked 1987 because we didn’t want to be beholden the other films in the series. One way to do that was to go backwards.”

“The other was, the original movie was in ’86, so that was one of the factors. We were like, ‘That’s when it started.’ So from our point of view that’s where it started.”

But while Bumblebee is very much a stand alone film, during our discussion diBonaventura still calls “it a prequel” and insists, ”It sort of links to the first films.”

He then clarifies this statement with, “I would say it links to the mythology not necessarily the films. We did some tips of the hat to the films. Because that’s fun for the audience.”

“I like to reward the audience that has shown up and supported us. So when you see Young Agent Simmons, that doesn’t mean anything to anyone that has joined the franchise. But to someone else they’re like, ‘Oh, that’s John Turturro!’” 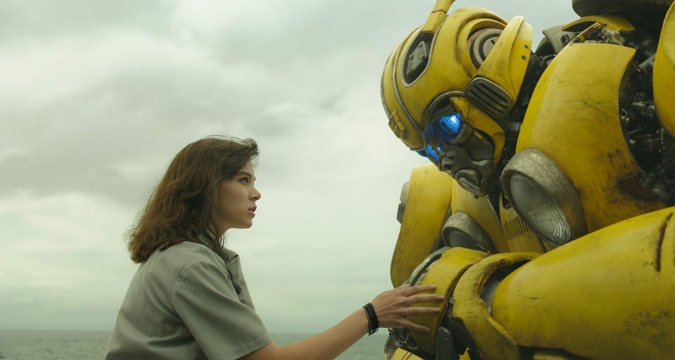 DiBonaventura admits that, at times, it was a “struggle” not to completely contradict Michael Bay’s set of films.

“We had to keep thinking, ‘Is there anything that we set in those 5 movies that we are going to directly contradict?’ There are 1 or 2 things that are in somewhat contradiction. But not entirely. Someone described it to me as, ‘It was 99% prequel, 1% not.’”

What is clear is that diBonaventura sees Bumblebee as an opportunity to at least adjust the tone and spirit of the franchise.

“The fans had often given us feedback that they wanted a movie with less Transformers and that they wanted to get to know one better. Or two. That was pretty much the only thing we said to Christina to box her in was. We all agreed Bumblebee was the right character to do, partly because he is so emotional and fun.”

At the same time, though, Bumblebee still had to tap in to what made the original film so popular, because, despite being hated by most critics, they have still grossed $4.38 billion at the box office combined.

“The challenge with this movie was; the intimacy, which we knew we wanted a lot of, doesn’t naturally juxtapose against big. We had to find the rhythm of that.”

“If you’re a male action fan of Transformers you are constantly looking for the action. If you’re coming to the franchise for the first time you don’t have that exception. So we were constantly recalibrating it during post. Certain scenes got shorter to get to something else.”