Amidst the bevy of veteran returnees to New York Islanders training camp — which began on Friday — three of the organization’s most highly-touted prospects made their first impressions on management.
Defenseman Noah Dobson, along with forwards Oliver Wahlstrom and Kieffer Bellows are poised to make a push for big club’s opening-night roster on Oct. 4 at Nassau Coliseum.
Needless to say, the next few weeks are vital for the trio.

Dobson, 19, is in the best position to make the NHL roster out of camp given a technicality in his eligibility.
Stipulations state that when an NHL draft pick is playing in the Canadian Hockey League — Dobson has spent the past two years in the Quebec Major Junior Hockey League with Acadie Bathurst Titan and the Rouyn-Noranda Huskies — are ineligible to play in the professional minor leagues (the AHL) until they are 20.
The problem is that Dobson — picked 12th-overall in the 2018 draft — can’t do much else in the QMJHL.
He won two CHL Memorial Cups, two QMJHL titles, two All-Star team selections, and was the 2018-19 QMJHL playoffs MVP.
“I saw a big change in my level. I was able to dominate more at the junior level last year,” Dobson said. ” I feel like I can have an opportunity to move on and play at [the NHL] level.”
Islanders head coach Barry Trotz seems to like the chance of that happening.
“He’s a really good player, there’s no question about that,” he said. “Another year in juniors probably won’t help him a whole lot… We’re talking about possibly having him on our hockey team or pressing for a job. That’s a great thing for us.”
It won’t be easy, regardless. The Islanders’ blue line is currently experiencing a log jam with Johnny Boychuk, Nick Leddy, Devon Toews, Ryan Pulock, Adam Pelech, Scott Mayfield, and Thomas Hickey already in the mix.
“With all camps, there’s lots of competition. Especially this year, there are lots of guys battling for spots,” Dobson said. “At the end of the day, it’s going to make the team better with all that competition… the competitive teams are the ones that have success.”
“It’s not an intimidation factor, I look at it as a challenge… I’m a competitive guy, so I want to compete out there.”
For the two forwards in Wahlstrom and Bellows, expectations to make the team might not be as high from Trotz — who admitted on Thursday it’s sometimes better to “overcook” prospects rather than call them up immediately.
Wahlstrom — drafted a pick before Dobson in 2018 — left Boston College after one season last year, joining the Islanders’ minor-league affiliate, the Bridgeport Sound Tigers. 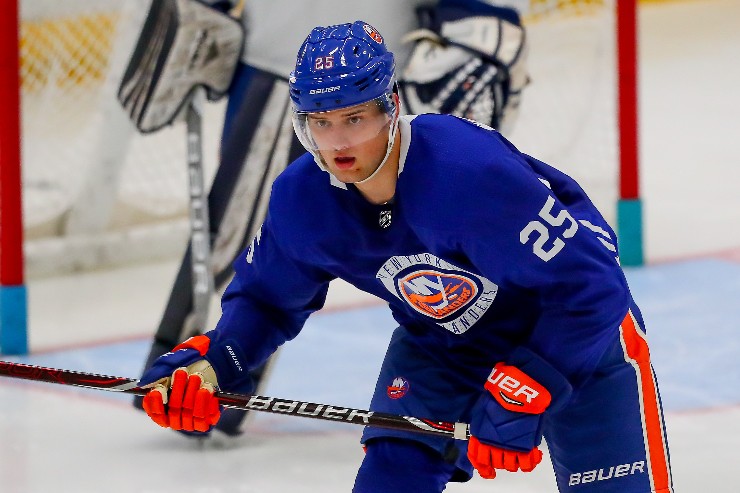 He recorded two goals and an assist in the final five regular seasons before adding two goals and two assists in the Calder Cup playoffs.
His performance earned the admiration of Trotz, but Wahlstrom isn’t taking much stock in that.
“It’s a nice compliment, but last year is last year,” Wahlstrom said. “I’m a rookie coming into this camp and I’m just going to enjoy the moment and work hard.”
The 19-year-old who spent his summer in Sweden working on his skating and strength is projected to develop into one of the better natural goal scorers in the NHL.
“The goal in the next couple of weeks is just progress every day, learn and take things in from the veterans, and put myself in the best position to make the team.”
Bellows — the elder statesman of the three at 21 years old — made his intentions much more clear. 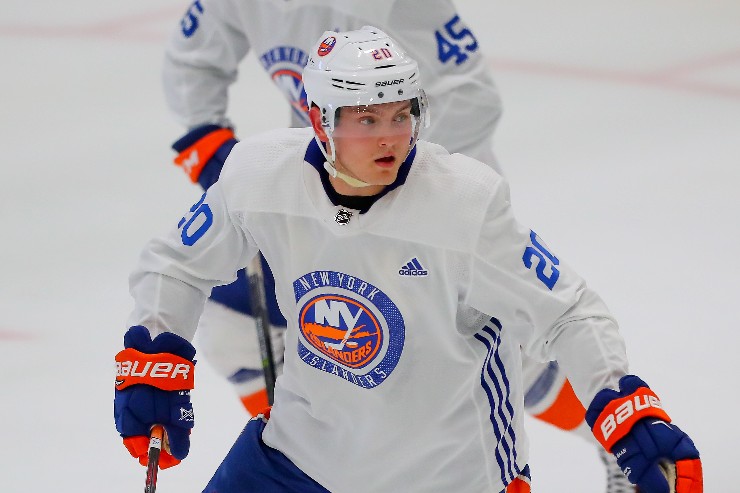 The former star of the United States junior national team didn’t have the easiest time in the AHL last year, though. Bellows posted just 12 goals and seven assists in 73 games during the regular season.
He had a better showing in the playoffs with two goals and an assist in five games to cap off what he put as “a learning year.”
“I got to go through the ups and downs of pro hockey and learn how to work out of those slumps that I was in,” he said. “It was tough.”
Selected 19th-overall in 2016, the skilled power forward has shown flashes of elite-level playmaking since being acquired by the Islanders.
He put up 41 goals and 33 assists with the Portland Winterhawks of the Western Hockey League in 2017-18 before making the jump to Bridgeport.
But for Bellows, that’s enough time away from the big time.
“I’m really ready to make this team and I know I can make it,” he told Metro. “There’s nothing else I want to do. I want to play in the NHL and that’s it.”