During turbulent times, it’s a normal reaction to search for meaning in a world that seems to be acting irrationally. Some people turn to religion, others to science and some just shut down completely. Famed astrophysicist and host of the shows “Cosmos” and “Star Talk” Dr. Neil deGrasse Tyson has been someone that many have looked to for answers to these questions over the years and in his newest book, “Letters from an Astrophysicist,” Dr. Tyson lets his readers into some of the most intriguing pieces of correspondence he’s had with fans throughout the years, as well as three open letters, including a eulogy to his late father. I caught up with the famed scientist over the phone to talk about the book while he was at work at the Hayden Planetarium, where he is the director of the Rose Center for Earth and Space, to talk about the new book.

“Whether you’re an educator and they’re a curious person, whether or not they’re formally a student, the contract is: I should know where they’re coming from,” — Dr. Neil deGrasse Tyson 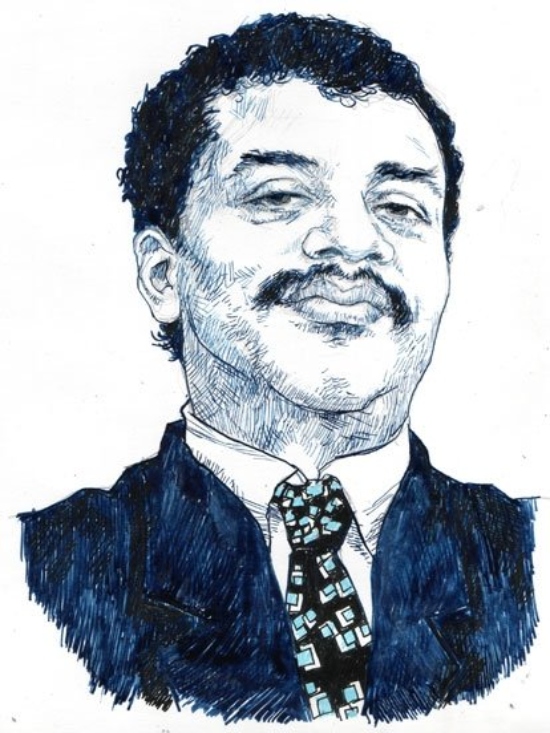 What was the inspiration behind pulling back the curtain and letting people see these intimate conversations that you have with people in your new book?

Neil deGrasse Tyson: Yeah, you said it precisely correctly. I’ve pulled back the curtain and the conversations cover topics that people rarely hear me discuss publicly. So it really is a behind the scenes, sort of under the hood, what’s going on when I interact with people one on one…. There’s about a hundred letters in the book, 101 letters to be precise, about 10% of the letters are from people who follow religious tradition and then they learned science and encounter a conflict and are now trying to understand how to reconcile; or they’re forever at odds and they’re reaching for some type of answer. Which I find to be humbling because these are people steeped in traditions that are very meaningful in their lives.

And I felt that, were I to engage them, I should do so in a way where I have some…where I’ve developed a sufficient knowledge of where they’re coming from. No one is suicidal in the book. Just people wondering, looking for meaning and purpose in life and wondering whether any perspective that derives from the universe could inform it. And this is what happens persistently throughout the book.

And so I’m intrigued that people feel so comfortable that they would just bring these elements to it. And I’ve thought about it and I realized that most people – I think this is true – most people have never met a scientist, much less been able to claim one as a friend. So their exposure to me may be their only occasion to share something in their life with a scientist and that’s what they’ve done.

I collected a few hundred of those letters and the 101 in this book are a culling from that set. So each correspondence has some value to more than the person who has received the answer. Letters that are different here at the fitness topic, I don’t need to include those in the book. They’d be happy with the Wiki page answer. And in fact, I had staff that would reply to such letters, you know, “How big the universe is” or “Why is it expanding,” the sort of thing. So this was a book of Q+A where you come to learn about astrophysics. It’s a book of questions from people who found themselves in a certain place in life where they saw, they needed, they wanted a perspective that only the scientists could give.

Neil deGrasse Tyson:  So my religious literacy, or my “spiritual literacy” is derived entirely because I’ve been asked questions of people who come from that [religious] background. So after whatever might be the lead questions, I get asked scientific questions about the universe, or what’s going on with black holes. In many cases by the fifth or sixth question people begin to branch in to “What does science say about God?” or “Who created the Universe, if not God?” So that becomes bland. There are many people who use that line of questioning that come my way. Originally, I was just sort of counting those questions as, “Well that’s not science.”

But then I thought to myself, when someone comes to me with whatever effort, especially if it’s a handwritten or composed letter, I open up more than just saying, “Well this is science, and that’s not.” Whether you’re an educator and they’re a curious person, whether or not they’re formally a student, the contract is: I should know where they’re coming from. And that responsibility is on my shoulders, not theirs. So if someone is a fundamental Christian and asks me a question, I should know what is driving their thoughts. Because if I don’t I will not otherwise know how to reach them with ideas, with thoughts and perspectives. So over the years I developed a huge library of different tracks to see where people were coming from, how and why, what they’re saying, what they’re not saying, what upsets them, what brings joy to them.

That background that I built over the years gives me the confidence in the conversation that I take back to people when they ask questions. And the same is true for UFOs and other paranormal phenomena. So a lot of my library is comprised of books that catch me up on where all of these people are coming from. And if you’re in the book, you will see, I give very real attention to people who, in some circles, would just be considered crazy. Right? Well not crazy, but delusional. One person said, “Could there really be a large hairy ape wandering the Pacific Northwest?” So, I said, it’s not likely and here’s why: The rate of which we’re discovering large animals in the world has dropped precipitously now that every place on earth has been explored.

So it’s just less likely. And I gave a few more arguments and he writes back and says, “Tyson, as a scientist, I would have thought [you] would have been much more open-minded about this.” He got a little angry. If you looking for Bigfoot, then you’re not only looking for Bigfoot because it’s a large hairy ape. There’s got to be at least two of them, and they reproduce, because it’s a mammal, if it’s hairy, so it’s got to be at least two. So that doubles your chances. Then they might have babies. So that triples your chances and you’re not just looking for one Bigfoot. So I’m giving people attention, but I also know where they’re coming from.

There’s a huge backdrop that I’ve acquired over the years. Mostly the form of self-driven homework that I’ve conducted so that I can start with where they are and then take them to a new place; rather than require that they come to where I’m standing.