Before Mayor Bill de Blasio held a press conference on an F train in Brooklyn Sunday, the New York Post claimed that transit police were ordered to “sweep the station for homeless persons.”

City Hall called the story a lie, but now an alleged police email published by the New York Post has surfaced that appears to confirm orders were given to remove homeless residents from subway platforms, as previously anonymous sources told the paper.

The alleged internal NYPD email was sent at 10:53 p.m. on Saturday by an officer at the department’s Transit Bureau and indicated the order was approved by Operations Sgt. James Lynch.

The email said that two officers were to be posted at the 4th Avenue/9th Street station, where de Blasio would board a northbound F train, and two others at Jay Street/MetroTech. 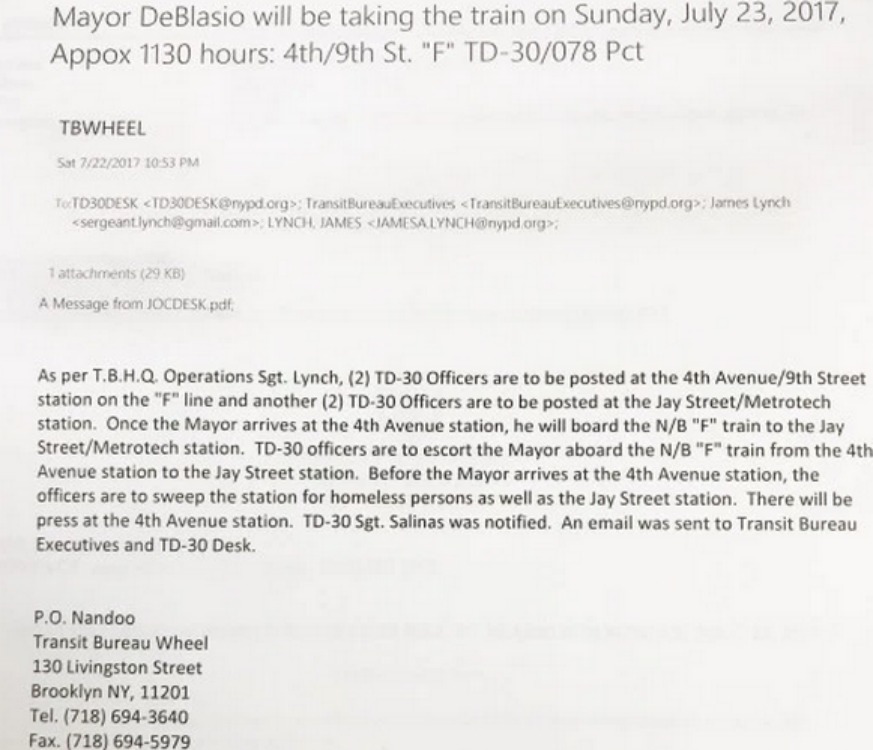 Since the email order came to light on Sunday, City Hall has vehemently denied its existence, with de Blasio’s Press Secretary Eric Phillips telling the Post that its “sources are refusing to provide their names because what they are saying is not true.”

The mayor denied knowing about the email on NY1 Monday night.

On Tuesday night, Phillips questioned the validity of the alleged email, but alluded it may have been shared between several officers who may have been making suggestions for the mayor’s subway press conference.

“There’s zero evidence the action ever took place because it didn’t take place, as we have said all along,” Phillips said.

The mayor’s office and NYPD did not respond to a Metro request for comment regarding the alleged email.

The mayor’s press conference unveiled a five-point wishlist of sorts for the MTA’s plans for the subway. Two days later, the agency revealed its action plan, which vowed that the city’s beleaguered straphangers would see vast improvements within one year.