Emeril Lagasse will set sail with Carnival Cruise Line in 2020 Yesterday afternoon, Carnival Cruise Line announced its brand-new cruise ship, the Mardi Gras, that will set sail in 2020. Paying homage to its very first ship, the TSS Mardi Gras, that set out on the high seas in 1972, the cruise will be a culmination of everything that guests have come to know and love from Carnival — and just a little bit more.

Over a private lunch in a tucked-away corner of New York City’s Bell Book & Candle, the people at Carnival unveiled that Mardi Gras will be welcoming aboard none other than Emeril Lagasse to helm a brand-new a la carte restaurant onboard the ship for passengers looking for authentic New Orleans cooking. Because when you think of food from the Big Easy, who else comes to mind other than Mr. “BAM!” himself?

The restaurant, Emeril’s Bistro 1936, will sit directly in the middle of the ship’s “French Quarter” zone and serve breakfast, lunch, and dinner.

Along with an open seafood bar, main menu items will include oyster and cochon de lait po-boys, muffaletta sandwiches, Emeril’s signature barbecue shrimp, fresh seafood ceviche, roasted duck & Andouille sausage gumbo, jambalaya and complements such as Creole potato salad with diced scallions and red beans and “jazz-man” rice. For breakfast, passengers will be able to indulge in the early hours with a shrimp and grits and a shrimp Creole omelet. To top off your meal, Big Easy classic Bananas Foster and lemon icebox pie will be waiting for you if you haven’t already stuffed yourself with barbecue shrimp. 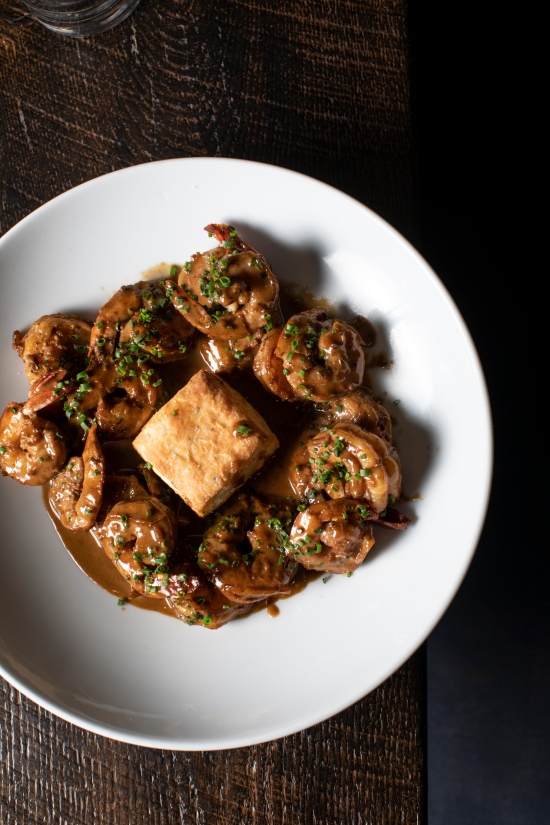 “It’s been an incredible experience already working with the folks at Carnival,” Lagasse says. “Not only the leaders but the culinary team and the chefs have been fabulous.”

As far as challenges that may arise serving fresh seafood in the middle of a cruise, Lagasse believes where there is a will, there is a way.

“When I opened in Las Vegas 25 years ago, they thought I was absolutely insane to open a fish restaurant in the middle of the desert,” laughs Lagasse. “Maybe it’s not been done. Why not? Let’s explore that. … I don’t think these days there are any limitations. If you want Berkshire pork, there’s no reason why we can’t have Berkshire pork on the ship. That’s what we’re talking about with the seafood and oyster bar. We’re not going to buy a bunch of frozen stuff. These guys, the culinary team at Carnival, think outside the box. If you want to have a hamachi crudo, we’ll figure that out!”

This kind of spirit and drive is what initially made America fall in love with Emeril in the first place, and is what puts great faith into the people at Carnival to deliver some of his classic and world-renowned dishes.

“People like to try different things,” says Carnival Cruise Line President Christine Duffy. “We wanted this to be more about introducing people to the whole vibe that is New Orleans Cajun cooking that he does so well.”

The Mardi Gras cruise will depart from Port Canaveral, Florida, and will have a variety of different destinations based upon the package you choose. The ship will also be the first cruise with a full roller coaster on board as well as many other forms of entertainment that will be announced in the upcoming months.

For more information and to book your trip, head over to carnival.com.