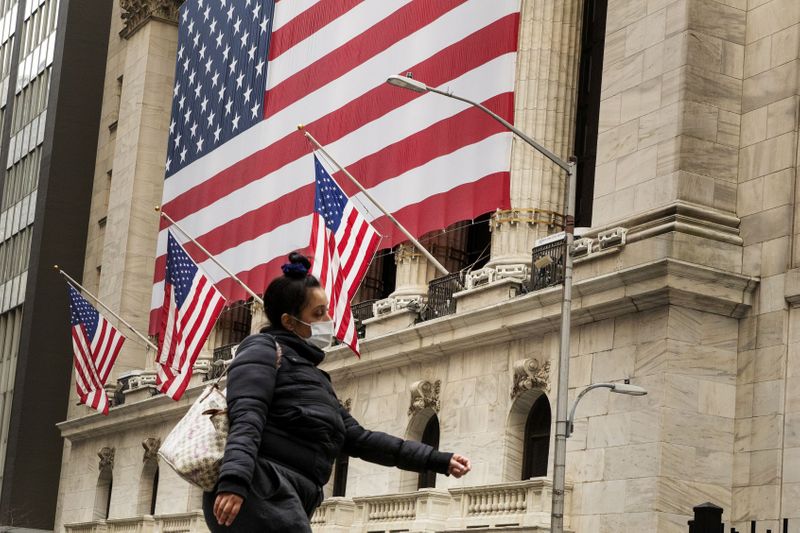 FILE PHOTO: A pedestrian with a mask walks past of the NYSE as markets continue to react to the coronavirus disease (COVID-19) at the NYSE in New York

U.S. Senate Republicans on Monday announced a $1 trillion coronavirus aid package, which Senate Majority Leader Mitch McConnell touted as a “tailored and targeted” plan to reopen schools and businesses. But Democrats called it too limited compared with their $3 trillion proposal that passed the House of Representatives in May, while some Republicans called it too expensive.

Enhanced unemployment benefits of $600 a week expire on Friday, which would be a blow to the household incomes and spending power of many Americans.

Some 30 million Americans are out of work and states are tightening lockdown restrictions again, a trend that has renewed worries about an economic recovery and dragged on the U.S. dollar.

Alan Ruskin, head of G10 strategy at Deutsche Bank, noted that currencies had been tracking the relative performance of their economies, so high-ranked economic performance was associated with stronger currencies.

“One clear pattern is how economies linked most tightly to China — including commodity producers as diverse as Australia, Chile and Brazil — have tended to perform better than economies most directly linked to the U.S., notably its NAFTA trading partners,” Ruskin said, referring to Canada and Mexico, the countries that along with the U.S. are party to the trade deal that has replaced the North American Free Trade Agreement.

MSCI’s gauge of stocks across the globe <.MIWD00000PUS> shed 0.37% following modest declines in Asia and broad gains in Europe.

The rest of the week will see 179 S&P 500 companies reporting second-quarter earnings, including Google parent Alphabet Inc <GOOGL.O>, Amazon.com Inc <AMZN.O> and Apple Inc <AAPL.O>, which all report on Thursday.

Goldman Sachs analysts, in a research note, cited emerging concerns about the “longevity of the U.S. dollar as a reserve currency.” “We have long maintained gold is the currency of last resort, particularly in an environment like the current one where governments are debasing their fiat currencies and pushing real interest rates to all-time lows,” the analysts wrote.

Gold is up over $125 in little more than a week as investors bet the Federal Reserve will reaffirm its super-accommodative policies at its two-day meeting ending on Wednesday, and perhaps signal a tolerance for higher inflation in the long run.

The dollar has been falling almost across the board for a month. It reached a two-year low against a basket of currencies at 93.416 overnight before recovering to 93.975 <=USD><.DXY>.