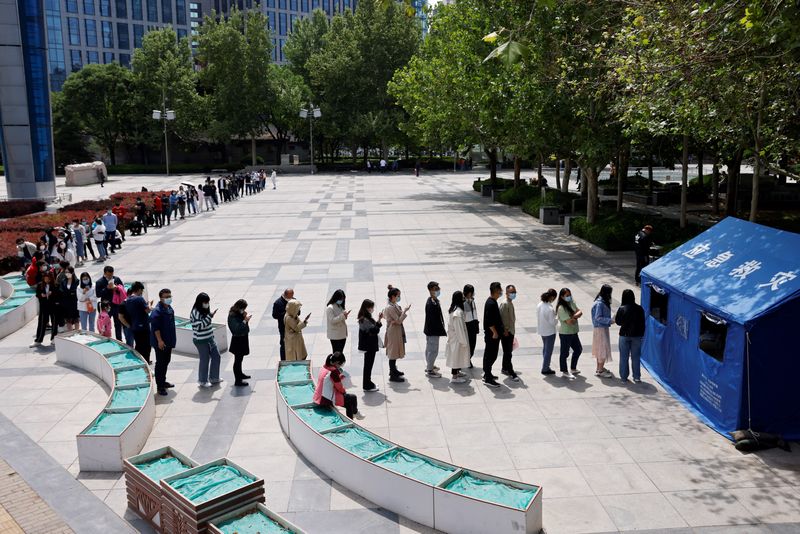 (Reuters) – China’s two biggest cities tightened COVID-19 curbs on their residents on Monday, raising new frustration and even questions about the legality of its uncompromising battle with the virus.

* With more U.S. travellers expected to take to the skies and the roads this summer as COVID-19 restrictions ease, unbridled demand will strain capacity in the leisure and travel industry and push prices even higher. ASIA-PACIFIC

* Shanghai authorities were tightening the city-wide COVID-19 lockdown they imposed more than a month ago, prolonging into late May an ordeal that China’s capital Beijing was desperate to avoid by turning mass testing into an almost daily routine.

* If Shanghai Communist Party chief Li Qiang has been politically bruised by the city’s struggle to tame a COVID-19 outbreak that has infuriated residents and caused severe economic damage, there is little sign of it.

* Israel said it was ending mandatory COVID-19 testing for arrivals at Tel Aviv’s Ben Gurion airport, but foreigners would still have to test negative overseas before boarding a flight to the country.

* The U.S. health regulator said it was limiting the use of Johnson & Johnson’s COVID-19 vaccine for adults due to the risk of a rare blood clotting syndrome, the latest setback to the shot that has been eclipsed by rivals.

* Bank of Japan policymakers remained unwavering in their resolve to keep massive monetary stimulus, even as some saw signs of change in the country’s low-inflation environment, minutes of their March policy meeting showed on Monday.

* COVID-19 restrictions imposed earlier in the year, which have now been lifted, led to a strong pick-up in Indonesia’s economic activities, Margo Yuwono, head of Indonesia’s statistics bureau, told a news conference.

* Japan’s airlines are betting on a travel recovery this summer after the COVID-19 doldrums, as many Japanese look to head overseas for the first time in years now that fully vaccinated residents no longer face quarantine curbs on their return.

* China’s foreign exchange reserves fell by $68 billion in April, the biggest drop in five and half years, official data showed, as the dollar climbed while foreign investors dumped Chinese stocks amid worries about the slowing economy.