Family of soldier killed in Niger says Trump ‘did disrespect’ them President Donald Trump reportedly didn't even know the name of the fallen soldier whose family he was speaking to. Photo: Reuters

President Donald Trump is claiming a Florida congresswoman “fabricated” his remarks when she described a callous conversation between the president and the family of Sgt. La David Johnson, who was killed two weeks ago in an ambush in Niger, but the soldier’s mother said that Trump did disrespect her family.

“President Trump did disrespect my son and my daughter and also me and my husband,” Johnson’s mother, Cowanda Jones-Johnson, told The Washington Post.

Facing heat from the media about his lack of response to the Niger ambush that left four U.S. soldiers dead, Trump made a long-awaited call to Johnson’s pregnant widow as she traveled with Rep. Federica Wilson and family to meet her husband’s body Tuesday as it arrived at Miami International Airport. 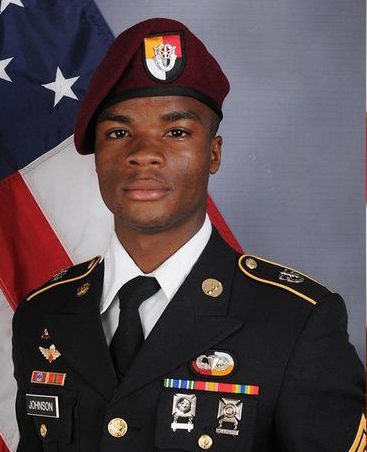 “She was crying. She broke down and she said, ‘He didn’t even know his name,’” Wilson said.

Wilson said she overheard Trump tell Myeshia that Johnson “knew what he signed up for, but when it happens it hurts anyway.”

Trump disputed Wilson’s claims in a tweet on Wednesday morning.

“Democrat Congresswoman totally fabricated what I said to the wife of a soldier who died in action (and I have proof). Sad!” Trump tweeted at 7:25 a.m.

Democrat Congresswoman totally fabricated what I said to the wife of a soldier who died in action (and I have proof). Sad!

Wilson heard about Trump’s tweet while talking on CNN’s “New Day,” and said she too had evidence to support her account of the call.

“I don’t know what kind of proof he could be talking about. I’m not the only person that was in the car. I have proof too,” she said. “This man is a sick man.  He’s cold-hearted and he feels no pity or sympathy for anyone.”

Jones-Johnson spoke to The Washington Post via Facebook Messenger and declined to elaborate on the phone call, but when a reporter asked whether Wilson’s version of the conversation between Trump and her family was accurate, she said “Yes.”