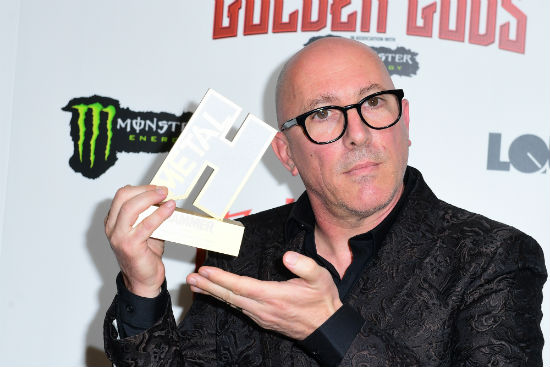 The message was posted last Friday, but began to pick up traction over the weekend with many commenters on a related Reddit page posting similar stories regarding Maynard James Keenan and his behavior.

Read the message, which was collected by Brooklynvegan, from @IWas17HeWas36 in full below:

“Deep breath. I have to anonymously tell this story because I tried to tell it from my real account and couldn’t name him directly out of fear, so I deleted the tweets. Here goes: I was 17 and he was 36.

I went to see A Perfect Circle and NIN in the year 2000 with my high school boyfriend. I will leave out the city in an attempt to protect myself. We were looking forward to this all year as both of us were really huge fans, teenagers obsessed with great music.

We were in the front row and my boyfriend had his arms around me. The band started. Maynard noticed me in the crowd. Not that it matters what I wore, but I was wearing a NIN tank top and baggy cargo pants with flat-soled combat boots.

Maynard saw me and threw a water bottle in my direction. The guy next to me caught it. My boyfriend and I laughed and thought that was cool. Minutes later, a heavy-set, blonde, white woman came out to meet us. She looked at me and asked, “Do you want to meet the band?”

I said, “Can my boyfriend come with me?” The heavyset woman said “I only have one pass. You can meet them now if you want.” I told my bf that I’d see him in a few minutes, and then I followed her backstage. She lead me back to the VIP area, and I never saw her again.

Maynard was sitting on a picnic table and was staring at me. NIN hadn’t gone on yet so I thought I had plenty of time to get an autograph and get back to the show and my boyfriend. I didn’t have a piece of paper, so I asked Maynard to sign my hand.

I was ready to go back with my bf. NIN was starting and I didn’t want to miss it. But Maynard kept chatting. He asked me how old I was. I said, “I’m 17.” Then he said, “I can’t talk to you here, let’s go watch a movie” and he pulled me away from everyone and onto a tour bus.

He lead me to a bed in the back on the bus and closed the door. He put on Fear and Loathing in Las Vegas. I decided to watch a few minutes and at least have a weird story to tell my boyfriend later. Yes, 17 year olds can be naïve. This is why older men target teenage girls.

He started rubbing my neck. At this point, I fell silent. He talked about the film, Johnny Depp, and Hunter S. Thompson while he started taking his pants off. All I could do was sit there, looking at the movie, unable to move.

I froze so he had to move my body into a missionary position. He pulled off my cargo pants. He forced himself in- there was no attempt at “warming up”. I mention this because this wasn’t about sex. This was about raping me as fast as he could.

He penetrated my vagina without a condom, moving rapidly, while I lay there frozen in a stunned silence. If I sound clinical it’s because it has been a long time and I have tried to push down any sort of fear or shame that comes with a rape.

There was no consent made. I was not high. I was clean. He did not seduce me, he forced me, quickly taking advantage of my paralyzed state. It took me years to process his actions. He came all over my torso and didn’t wipe me off. There were stains on my tank top when I left.

I don’t remember the next few minutes but I do remember this- my boyfriend was waiting for me at the doorway where I had been lead. His face was sick with worry. I didn’t want to upset him so I kept it to myself.

I’m sure to some this doesn’t sound like rape. I’m telling this story because in the year 2000 the conversation about consent was non-existent, at least not at my high school. Statutory rape in this state is 16 and under. Lucky for him he beat it by 1 year.

It has been 18 years and I’m still working through the trauma of that assault. #MeToo and #TimesUp has been an eye opener. I hope that everyone gets a chance to heal. I hope I can heal. Maybe telling your story is part of the healing process for victims of sexual assault.

I kept it in for years because I knew I wasn’t going to be believed by he legion of dedicated fans. Because he chose to not use a condom when he raped me, he also gave me a strain of HPV, which thankfully was not the cancerous type.

Later on, I heard from a male friend that he did this in every city, at every show. He preferred underage girls (or as close to underage as he could get). What happened to me has likely happened to a lot of underage girls by this same man.

A warning to Maynard James Keenan and all men: *leave underage girls alone.* Do not take advantage of a girl’s kindness and trust. She deserves to keep her self-confidence and happiness forever. #TimesUp #MeToo

I’ve carried a sense of deep shame from this assault for many years. I thought it was my fault. How could I let him do this to me? But he was 36. I was 17. He knew exactly what he was getting away with. What could I have done differently? My body was paralyzed. #MeToo

Now that I am approaching the age that Maynard James Keenan was when he assaulted me, the thought of assaulting a 17 year old is completely unthinkable. Just *unthinkable*. We have to train men to think rape is as unthinkable as cannibalism. #MeToo”

As of now, this is a developing story. Maynard James Keenan has yet to respond to these allegations. We will update this space more as the story develops.