The introduction of the brand-new UEFA Nations League is a nice attempt to keep everyone’s mind off the international break, but you can’t replace the Premier League and fantasy Premier League football.

It’s understandable considering four of those six teams are in the top-fve of the league table. However, United and Arsenal are attempting to shake off bad starts as they sit in ninth and 10th respectively.

The most surprising side of the early portions of the 2018-19 Premier League season, both real and fantasy, is Watford.

The Wasps have won each of their first four games as they sit third in the table behind Liverpool and Chelsea on goal difference. In fantasy Premier League play, defender Jose Holebas is the third-ranked field player in the league while midfielder Roberto Pereyra is 10th.

Here is some advice on who to play heading into Gameweek 5:

The Crystal Palace striker has a 75-percent chance of playing on Saturday against Huddersfield. If he’s able to go, he should garner consideration to start on your team.

Zaha has accounted for two of Crystal Palace’s three goals this season and has looked like the Eagles’ only source of attacking prowess at times. Against Huddersfield, he’ll be lining up against a squad that has already conceded 10 goals through its first four matches. That will be a welcomed sight for a side looking to get its offense clicking.

This should be a no-brainer as it is given the start Liverpool’s Mane has had this season. With four goals in his first four matches, he is the Premier League’s joint top scorer and the No. 1 talent in fantasy Premier League.

He and Liverpool will get its first real test of the season against Tottenham, a side Mane recorded a brace against in February of 2017. Spurs will be keen on erasing a 2-1 loss that came at the hands of Watford earlier this month. If Watford can get two past Tottenham, a red-hot Mane and the high-flying Reds should be able to as well. 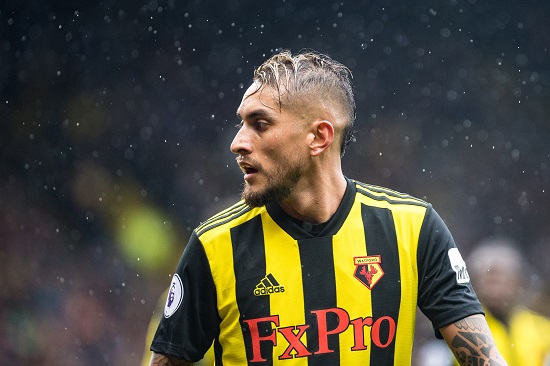 The Watford midfielder only put up two fantasy points against Tottenham in Gameweek 4, but his three goals on the year makes him a solid option to start even if it is coming against Manchester United.

United has been out of character, to say the least, under Jose Mourinho this season, conceding seven goals through four matches. Other than Tottenham, its opposition hasn’t necessarily been too fearsome with tilts againt Leicester, Brighton and Burnley.

While I would give Pereyra a chance to go against United, I would leave Watford’s top defender on the bench in fantasy Premier League play this week against United.

Striker Romelu Lukaku has been scorching as of late, recording a brace for United against Burnley before scoring three goals in two matches for Belgium over the international break. When he’s on his game, Lukaku is unstoppable and should give the Watford defense a difficult time come Saturday.