If you’re a fan of Amazon Prime Now, the tech giant’s instant delivery service, apparently there’s a way it can be used to help out other people.

The four-minute heartfelt video is called “How to Hijack Amazon Prime Now for Good” and it has gone viral with over one million page views since it was posted earlier this week.

In the video, Bliss walks up to homeless people and asks them what kind of things they need. He places an order on Amazon Prime Now and within two hours, a courier arrives at the location, confirms the name of the person and hands them their goods.

According to the description in the video, Bliss makes sure to let everyone know that Amazon is not associated with the video.

“Note: this video is NOT SPONSORED OR AFFILIATED WITH AMAZON. I’m sure this technique could be used with Postmates or whoever else too,” Bliss writes. “I simply wanted to demonstrate how easy and convenient it can be to bring a person in need, what they need, and to encourage that behavior,” he adds.

The video starts with Bliss walking up to a man named Jack and asking him if there is anything he needs. Jack tells Bliss he could use some socks and a pair of shoes. Bliss pulls up the items on the app and places the order. In the “Special Delivery Instructions” section, he provides more information about Jack and describes him by saying he’s the guy  with the “grey beard and brown jacket.” The video cuts to an Amazon Prime Now courier walking up to Jack, confirming his name and handing him a package of socks and sneakers. 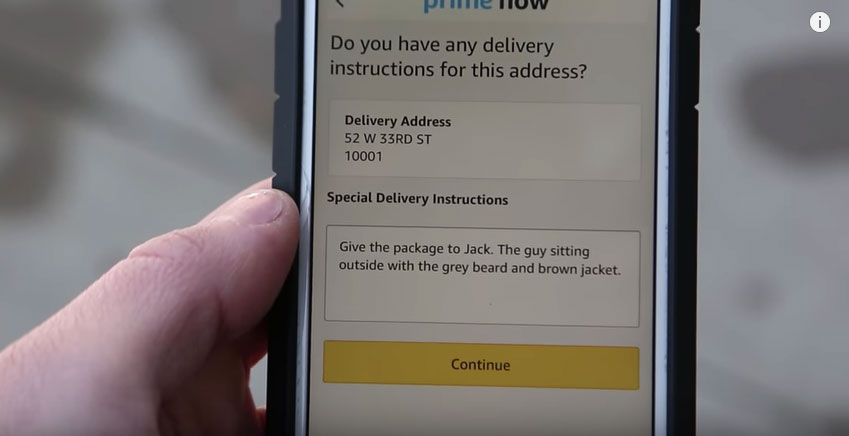 This was done several other times throughout the clip for different homeless people and each time the courier delivered a package, they appeared to look humbled by the experience.

“I was definitely surprised by how sweet and caring the couriers were,” Bliss told NBC’s “Today.” “I was concerned that the couriers would have a lot of hesitation or stigmatize these people, but they took to it like fish to water … you could tell they enjoyed it and it meant something to them.”

Bliss said it took him five days to shoot the footage and the homeless people consented to be featured in the video.

According to CNET, Bliss said Amazon managers and executives have reached out to him to thank and congratulate him for his gesture.

His hope for this project is the show how much of a positive impact you can have on others just by doing something as simple as opening an app.