Gender Reveal Lasagna Is Not a Joke, But Feel Free to Mock It - Metro US
Food & Drink

Gender Reveal Lasagna Is Not a Joke, But Feel Free to Mock It Revealing your baby’s gender via cake is so yesterday — Villa Italian Kitchen just introduced a Gender Reveal Lasagna where new parents can introduce their “bundle of joy with a boatload of cheese.”

The nationwide pizza chain is feeding a nationwide frenzy for ever more creative gender reveal parties that’s been raging since 2014 with the Gender Reveal Lasagna. The white lasagna is made with Alfredo sauce and ricotta cheese dyed either pink or blue, topped with a layer of mozzarella to hide the secret.

The trend of increasingly elaborate gender reveal parties defies the current cultural moment as more people understand that gender is not as simple as male or female, and is determined by how a person self-identifies rather than their sex organs. And fun fact, the color pink wasn’t associated with women until the 1940s — before then, the dominant color in children’s sections varied by department store.

The Gender Reveal Lasagna package is $139.99 and also includes garlic rolls and a choice of garden, Caesar or Greek salad. The spread serves 12 people, who at least won’t go hungry after stifling their laughter.

“Creating the Gender Reveal Lasagna was so much fun,” gushes Stephanie Beamer, vice president of catering at Villa Restaurant Group. “We think of our guests like family, and wanted to find a way to celebrate such a momentous occasion with them. We can’t wait to see all the videos of guests revealing their babies’ genders to family and friends in such a unique way.” And the internet can’t wait to mine them for reaction GIFs.

The company is encouraging this by asking people to post their Gender Reveal Lasagna videos to Facebook or Instagram with the hashtag #LasagnaReveal to be entered into a quarterly drawing. One winner will receive free catering during their first week home from the hospital. 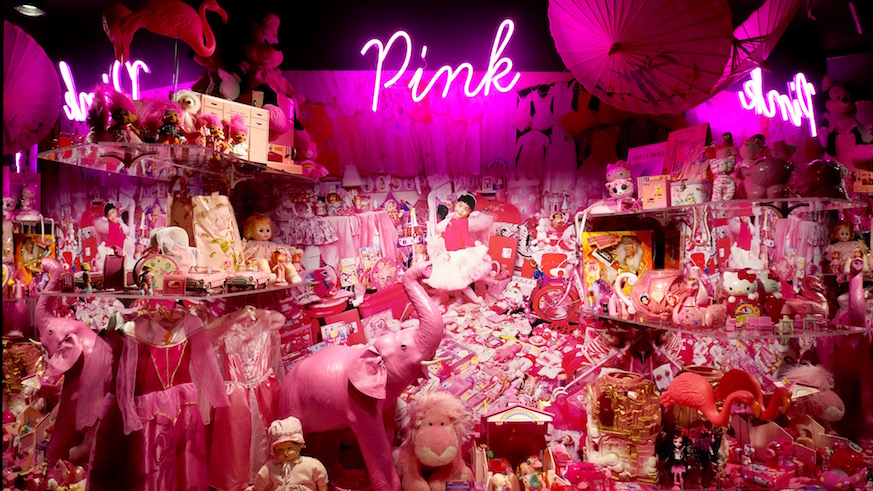 If you think about it, a Gender Reveal Lasagna makes sense since moms-to-be are always hungry. And it’s definitely safer than these wild gender reveal parties.

Most notoriously, a Border Patrol agent in Arizona started a massive wildfire with an explosive that contained colored powder during a gender reveal party in 2017 that burned 45,000 acres and caused $8 million in damage.

In Louisiana, a gator farmer used his 60-year-old pet alligator named Sally — she responds to her name, according to him — to reveal the gender of his third child by putting a hollowed-out watermelon in her mouth. When Sally chomped down, blue Jell-O burst out.

And a father in Somerset, New Jersey broke his ankle while kicking a football filled with colored powder. The gender was revealed to be a girl, and quite possibly the real-world incarnation of Lucy from The Peanuts.