George A. Romero was more than his zombie movies - Metro US
Celebrities

George A. Romero was more than his zombie movies George A. Romero didn’t invent the word “zombie,” but he might as well have. Before he unleashed “Night of the Living Dead” upon an unsuspecting world in 1968, the word didn’t instantly conjure up what it would mean from then on out: white terror, hungry corpses, gnawed-upon flesh. “Zombie” simply meant the undead, the deceased reanimated. Sometimes they were bad: Frankenstein’s monster was a zombie. Sometimes they were not: The blank-faced, not-quite-dead wife of Val Lewton’s “I Walked with a Zombie” (a stealth adaptation of “Jane Eyre,” amazingly) was also a zombie. But within the first minutes of “Night of the Living Dead,” when lurching corpses lunge upon two innocents and chow on one of them, the word was forever changed.

With Romero’s passing yesterday at the age of 77, you’ll be hearing a lot about zombies. After all, the filmmaker made six zombie pictures, each with the words “of the Dead” in the title. It’s a great series, even if the films aren’t always great. (Though four of them are, and the other two are worthwhile or better.) Romero always had trouble getting funding when the films didn’t have boast those three precious words, and he remained to the end of a humble and self-deprecating man, who was never financially comfortable to see his impact or his greatness. (Just ask his good friend, “Shaun of the Dead” filmmaker Edgar Wright, who wrote this touching remembrance.)

But when he managed to convince some financiers or even a studio to give him money for something else, he was able to build a formidable body of work — usually within the horror genre, but always while sanding away at the genre’s edges. He was a first-rate gorehound. He was also a first-rate satirist, a first-rate independent filmmaker, a first-rate chronicler of humanity at its worst and its best. He was the Mark Twain of horror.

“Night of the Living Dead” was a freak hit back in 1968 — freak because it was a micro-budgeted regional film, hailing from Romero’s home state of Pennsylvania, where he would make many of his films. Still, Hollywood didn’t come calling for this 20-something newbie who’d taken the box office by storm. It took another decade till he’d have another hit, which, not too coincidentally, saw him return to his former glory.

Still, “Dawn of the Dead” (pictured below) was no lazy sequel. It was longer, gorier, even more satirical. If you missed all the subtle critiques of class and racism in “Night,” you couldn’t miss the stab at consumerism in “Dawn,” what with zombies staggering around a materialist paradise as mindless Muzak blared. This was America of 1978. (We’d like to think if he had made a seventh “Dead” film,” it would concern our Internet culture, and it would be little but zombies mindlessly clicking on clickbait.) 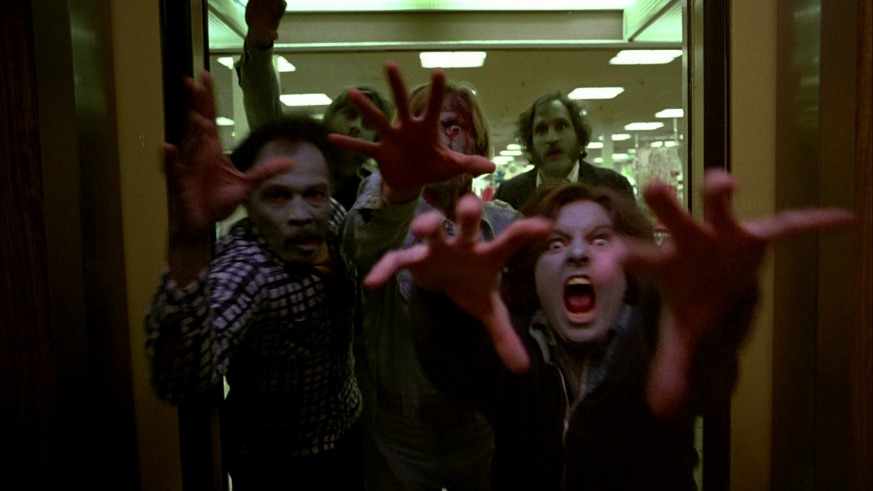 Romero wasn’t doing nothing for that decade. In fact, he was prolific. He worked on the edges of the industry. At first he tried to break from the horror genre. With “There’s Always Vanilla,” he tried his hand at a rom-com, then tiptoed back with “Season of the Witch,” which did concern witches but was certainly no scare machine. (The distributor even re-cut it, retitled it as “Hungry Wives” and tried to sell it as softcore.)

After those two stumbles, Romero came into his own. “The Crazies,” from 1973, sort of involves zombies, but not the flesh-eating kind. They were small-town Pennsylvanians whose minds were perverted by the accidental release of a military biological weapon. Decent, blue-collar, hard-working Americans suddenly became homicidal, turning on each other. When the military comes in to clean up their mess, they only make it worse. “Night” was sneakily subversive, bringing the gore seen on Vietnam-era TV sets into movie theaters, but “The Crazies” was no-holds-barred scathing. It mocked a country failing to hold onto its traditions as the world burned, as well as a government that has no idea how to clean up its cock-ups.

“Martin,” made five years later, isn’t satirical, but it might be his most clever film. Its hero, played by John Amplas, looks like a young man, but he swears he’s not. He thinks he’s a vampire, though he has no powers; when he kills people, which he does throughout the film, he has to use sedatives and blades, unable to seduce his victims or bite their necks with pointy fangs. It also has our pick for the greatest ending ever, which we’re not just saying because we’re sad Romero died.

After the international success of “Dawn,” Romero could have done anything he wanted. And so he did. He made “Knightriders” (1981), his most personal film, as well as his longest (at 2 ½ hours) and hardest to sell. A young Ed Harris plays the very serious leader of a gang who recreate the Court of Camelot in modern times, but on motorcycles, touring the country, putting on motor-jousts for sparse regional crowds. It’s an eccentric film about eccentric artists doing their thing without the need to make money or set the mainstream on fire, and how hard it is to make a living doing that. In other words, it’s not hard to tease out the autobiography.

It’s here that Romero finally happened upon some semblance of vocational stability. His next film was “Creepshow,” sold as a meeting of the macabre minds, namely he and Stephen King. Its campy tone and light gore made it the most approachable Romero yet, and he rode its success into a third “Dead” film, which was to be the biggest. He lost most of his budget en route to production, but Romero was nothing if not resourceful. Even though it’s set largely in an underground bunker and withholds the blood-letting till its climax, it delivers the goods its true fans expect from the series. That’s to say it’s a merciless takedown of the powers-that-be, where the real villains are the psycho military men, not the brainless undead who eventually tear them limb from actual limb.

Romero stayed in Hollywood for a bit longer, yielding two underrated (which is to say underperforming) horror numbers: 1987’s “Monkey Shines” and 1993’s “The Dark Half,” his second King collaboration. He laid low for a while after, barely heard of until the unexpected happened: zombies became cool again. In the mid-aughts, the one-two punch of “Shaun of the Dead” and Zack Snyder’s “Dawn of the Dead” remake caused Universal to run for Romero himself, presuming that the father of the zombie movie would make the ultimate new zombie movie.

“Land of the Dead,” from 2005, didn’t set the box office on fire, but it’s a blistering political work, in which the rich hunker down in tall buildings, swimming in their riches like Scrooge McDuck, ignoring the world burning just outside. It’s a takedown of American greed, perhaps even more a sock to the gut now than in 2005, but it’s also personal. It’s from a director who never got rich off his creation, even as countless other, less talented people did.

Romero only made two other movies, both “Dead” entries, both done on the cheap. “Diary of the Dead,” from 2007, is his smarty-pants look at what we called back then “new media,” using then nascent social media to show how the tech-happy kids of a decade ago would have handled a zombie apocalypse. “Survival of the Dead,” made two years later, is the least of the series — a Hatfield-and-McCoys riff that lacks the drive of the others. But you could still sense a master at work. It’s a classic easy-to-underrate autumnal work, much like the final films of John Ford, Howard Hawks or Otto Preminger.

And so Romero leaves us not just with a legitimately original horror idea, one still being reanimated — every week on TV, as it were — but with a deeply personable body of work, rich with ideas and, sadly, forever-relevant commentary. And, of course, there are all those zombie head-shots.