It’s easy to get wrapped up in Northern Ireland’s incredible cities, but sometimes it takes getting behind the wheel and venturing out to really get an idea of what this beautiful region has to offer. Known as one of the world's great road journeys, the Causeway Coastal Route starts in the vibrant city of Belfast and finishes in the walled city of Derry-Londonderry, offering 154 miles of stunning scenery, incredible food and epic experiences you won’t want to miss. Here are some can’t-miss experiences along Northern Ireland’s Causeway Coastal Route. 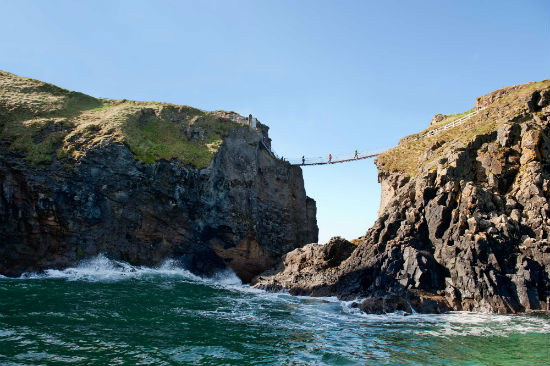 Highlights of the Causeway Coastal Route

While there are many unforgettable attractions along the Causeway Coastal Route, the Giant’s Causeway- known as the eighth wonder of the world- is a vision that’s sure to stay with you for a lifetime. This official UNESCO World Heritage site is made up of 40,000 hexagonal stone columns that blanket the landscape and disappear into the ocean like stepping stones to a lost world. According to science, this whimsical landscape was created 60 million years ago as a result of intense volcanic activity; however the local legend of warring giants is a lot more fun!

Just a ten-minute drive from the Giant’s Causeway is Dunluce Castle, one of the island’s most breathtaking castles. Built in the 14th century, the castle sits right on the cliff’s edge so you can take in the magical views of the coast line while surrounded by some of Northern Ireland’s deep-rooted history.

Speaking of magical views, nothing can quite compare with the jaw-dropping Carrick-a-Rede rope bridge, which swings and sways 98 feet over the sea between Northern Ireland’s mainland and Carrick-a-Rede Island. Crossing is an exhilarating experience, with the bridge lightly bouncing with every step and the ocean crashing below. Those brave enough to cross will be treated to breathtaking, 360 degree views of the most picturesque areas in all of Northern Ireland.

Work on Your Golf Game

Northern Ireland is a golfer’s paradise and the stunning backdrops of the Causeway Coastal Route provide the perfect setting for a round of golf. Royal Portrush Golf Club is set to host the 148th Open in 2019, where the winner will need to overcome the course’s towering dunes and sweeping valleys. Travelling along the Causeway Coast will bring you to another epic course, Portstewart Golf Club - one of Northern Ireland’s hidden gems. Not to be outdone is the course Golf Digest saw fit to name 2017’s number one in the world - Royal County Down which has played host to the Irish Open, the Walker Cup and the Curtis Cup.

Food and Drink along the Coast

The Causeway Coastal Route is perfect for foodies and whiskey lovers alike. Located in the charming village of Bushmills, the Old Bushmills Distillery is the oldest and one of the most renowned whiskey distilleries in all of Ireland. Originally granted a license by King James the 1st, the distillery opened its doors in 1608 and has been delivering the goods ever since. Once you’ve sipped and sampled some of the distilleries’ finest, get your fill of fresh seafood from Harry’s Shack. This incredible eatery right on Portstewart Strand serves culinary favorites straight from tide to table, but if it’s an array of local delicacies you’d like to sample, then be sure not to miss the Ballycastle Food Tour where you can delight in all the Northern Ireland favorites from handmade scones, to freshly shucked, local oysters.

Live Out your Ultimate Game of Thrones ® Fantasy!

The eighth and final season of HBO’s Game of Thrones® airs next year, but as home to more Seven Kingdoms locations than anywhere else in the world (26 to be exact); Northern Ireland has truly earned its title as ‘Game of Thrones® Territory’. Fans of the famous George R.R Martin books and the wildly popular T.V. show will be thrilled to know that you can explore the real-world Westeros by touring actual filming locations such as Ballintoy Harbor, otherwise known as Pyke - home of the Ironborn. Or follow in Ayra’s footsteps and stride down the Kingsroad, underneath the twisting trunks of the 200 year old beach trees that create what’s known as the “Dark Hedges.”

There’s never been a better time to discover Northern Ireland. Book direct flights to Belfast from New York’s Stewart International Airport and Providence/Boston on Norwegian for as little as $115* one way. Learn more at Ireland.com/Belfast