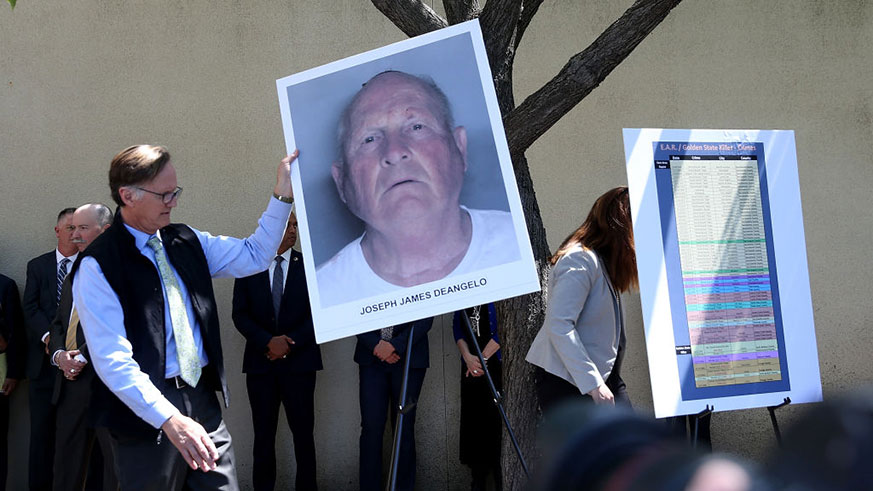 The 40-year investigation into the “Golden State Killer” has resulted in the arrest of a suspect, a stunning twist in one of the country’s most infamous unsolved serial murder cases.

Joseph James DeAngelo, a 72-year-old former police officer, was arrested on Tuesday afternoon at his home in Citrus Heights, the Sacramento District Attorney said in a press conference on Wednesday. He is charged with two murders and is a suspect in seven more killings and 51 rapes throughout California between 1976 and 1986.

Originally dubbed the East Area Rapist/Original Night Stalker (EAR/ONS), the Golden State Killer had confounded professional and amateur investigators for decades, despite a digital-era revival of interest in the case. The crimes were brutal and shockingly brazen: Rapes of single women alone in their homes, then assaults on couples awakened in the middle of the night, then murders, in quiet California suburbs such as Goleta and Irvine.

The attacker appeared by his victims’ beds after midnight, binding hands and feet with shoelaces tied in a diamond knot. Single women said he seemed to know when they would be alone. When attacking a couple, he would stack dishes from the kitchen on the man’s back while he raped the woman in another room. Sometimes he sobbed or raided the refrigerator. Then he would disappear, running or biking away from the scene. Witnesses said he seemed very young.

After the attacks, EAR/ONS would call his victims and taunt them. Terrified communities held town meetings and organized neighborhood watches, yet he kept resurfacing for years, evading capture each time. The attacks escalated to fatal bludgeonings before stopping abruptly in 1981. After a five-year lull, there was one more killing in 1986. Detectives chased thousands of leads which ran cold.

DeAngelo was arrested Tuesday around 4pm in Citrus Heights, California, the site of six EAR/ONS attacks between 1976 and 1977. Police said he seemed to be surprised. Charged with the 1978 shooting deaths of Brian and Katie Maggiore in nearby Rancho Cordova, DeAngelo is being held in Sacramento without bail.

Neighbors said DeAngelo lived with his daughter and granddaughter, who had recently moved in with him, and he seemed to have anger issues, shouting to himself in frustration so loudly he could sometimes be heard down the street. He was a Vietnam veteran who had been fired from the Exeter, California, police force in 1979 after being caught shoplifting a hammer and a can of dog repellant.

In recent years, amateur sleuths swapped theories about EAR/ONS via online bulletin boards. The case inspired TV documentaries and a blog by true-crime writer Michelle McNamara, who died months before the 2017 publication of her book on the case, “I’ll Be Gone in the Dark.” Although McNamara’s work catalyzed public interest in EAR/ONS, it didn’t lead to DeAngelo’s arrest, authorities said Wednesday.

That came about via a public tip, supplemented by DNA evidence taken from the suspect’s trash, within the last week, said Sacramento District Attorney Anne Marie Schubert. “The answer was and always was going to be in the DNA,” she said. “We found the needle in the haystack, and it was right here in Sacramento.”