Experts predict that more than 80 percent of our ocean is unexplored, and that means up to a million marine species have yet to be studied. But a new innovation out of Harvard could help further deep sea exploration, and it’s kind of like a real-life pokeball.

Researchers at Harvard’s Wyss Institute for Biologically Inspired Engineering, the Radcliffe Institute for Advanced Study and the John A. Paulson School of Engineering and Applied Sciences worked together to create a device that could catch and release soft sea creatures without damaging them.

This device was described in a release as a sort of underwater pokeball, and it’s actually a semi-accurate description, explained paper author Zhi Ern Teoh.

The innovation, called a Rotary Actuated Dodecahedron, or RAD, starts out as a flat, 2-dimensional sheet that can then fold itself into a 3-dimensional shape — a dodecahedron, like a 12-sided die — using a single motor.

The RAD can enclose delicate sea creatures, like jellyfish, squid and octopuses, and let them go without causing them any harm.
The fact that the so-called underwater pokeball could capture sea creatures in such a gentle way is crucial to marine biology, explained David Gruber, a Radcliffe fellow and professor of biology and environmental sciences.

“If we’re going to go analyze a really expensive piece of art, like the Mona Lisa or a Van Gogh, I wouldn’t imagine we would go and rip a piece off,” he said. “So it’s in the same vein when we’re thinking about how we’re exploring life in the deep sea.”

Scientists still don’t have a lot of tools for deep sea exploration, Gruber noted, and many that exist are rigid and tend to harm soft-bodied sea creatures, even killing them. Plus, scientists want to study sea creatures in their natural habitats, rather than always bringing them up to the surface, and inside this so-called pokeball, that could become a reality.

How could this so-called underwater pokeball help deep sea exploration? 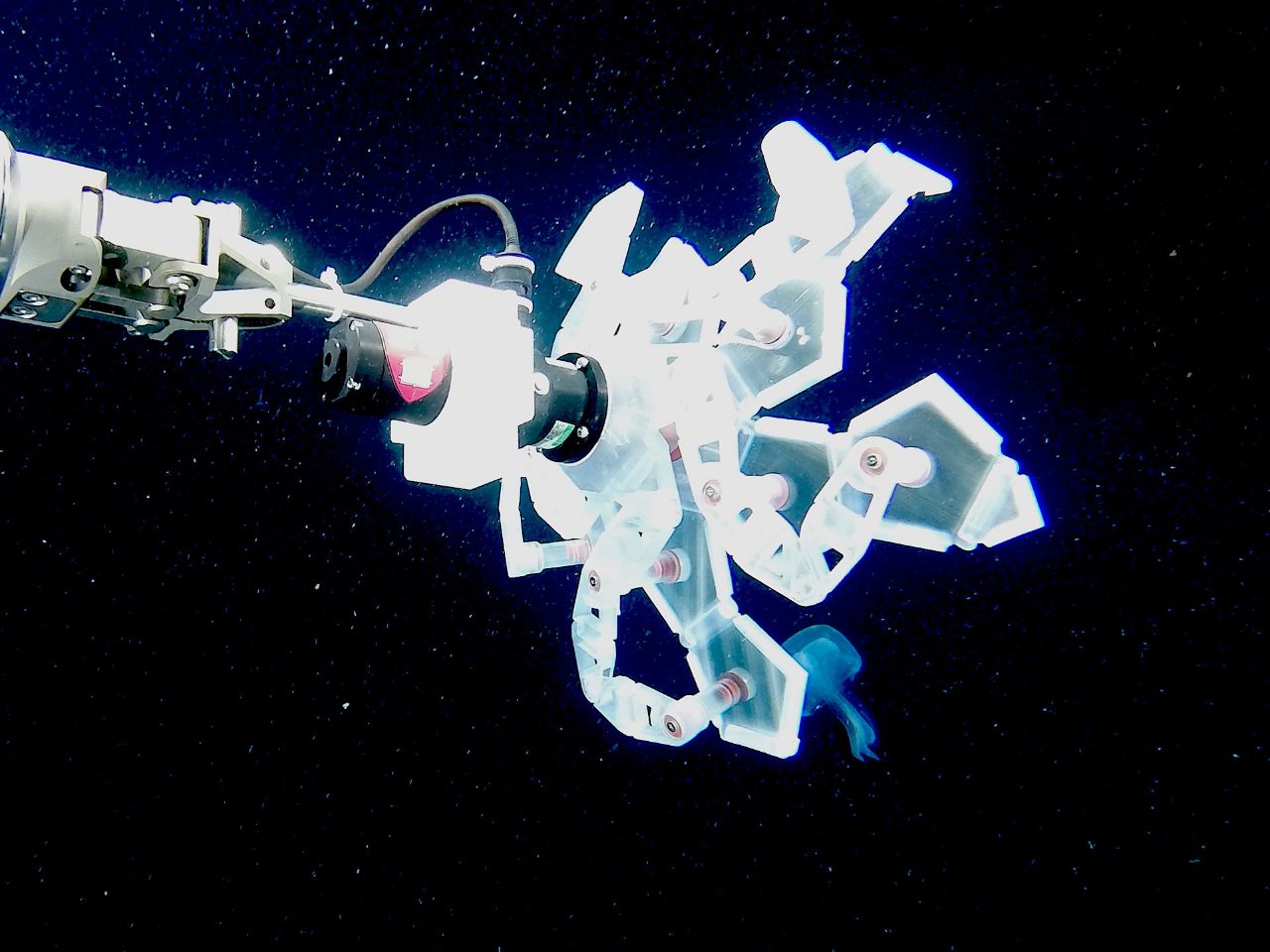 The rotary actuated dodecahedron (RAD) sampler has five origami-inspired “petals” arranged around a central point that fold up to safely capture marine organisms, like this jellyfish. Credit: Wyss Institute at Harvard University

Researchers tested RAD at the Mystic Aquarium in Connecticut, where it successfully collected and released moon jellyfish underwater, and also at the Monterey Bay Aquarium Research Institute, where the research team used it to capture soft organisms like squid and jellyfish in their natural habitats and release them without harm.

This is a stepping stone, Gruber said, to furthering deep sea exploration. He said the team plans to add on to the device so they can study sea creatures as they are inside.

“We see this can work and can enclose animals delicately, so we can start adding new sensors, imaging equipment, get DNA,” he said. “A sea creature would come into this dodecahedron and get a doctors checkup and then we’d let it go.”

Teoh sees this device being used in other situations as well, like outer space exploration.

“I can think of deployable solar panels for satellites or deployable habitats in space,” he said. Getting things into orbit is expensive and hard, so transporting a device that folds up small and flat would be easier, and since RAD doesn’t have a lot of motors, it’s easier to control, he said.

Ultimately, the most exciting part of this innovation is its ability to be gentle, according to Gruber. He hopes this fosters more respect for marine life, especially the unknown creatures in the deep sea. With this, perhaps scientists could finally catch them all.