The official start of summer isn’t until June 21, but the boiling temperatures outdoors make it feel like we’re already in the fifth month of the season (not that we’re complaining).

The hot temperatures mean we’re spending more time at the pool and on the beach, but it also increases the risk for getting heat-related illnesses. Two of the most common: heat exhaustion and heat stroke. And yes, you can get them even if you’re not exercising outdoors or playing sports.

Heat stroke and heat exhaustion are both caused by prolonged exposure to heat without adequate cooling, according to Dr. Bryan Canterbury, M.D. at Newton-Wellesley Hospital in Boston.

These illnesses often happen “when exercising, working or playing outside during hot days,” without breaks or proper hydration, he said. But they can also happen at home or in “another place without air conditioning or good ventilation.”

But in the fight of heat stroke vs. heat exhaustion, it’s heat stroke that’s the most dangerous.

The good news? “Both can be reversed if caught early enough.”

The symptoms of heat exhaustion

While not as life threatening, heat exhaustion is still a serious illness that can negatively impact your health for several days.

The symptoms of heat stroke

While heat exhaustion is dangerous, heat stroke is deadly and kills approximately 600 Americans a year, according to the U.S. Centers for Disease Control.

The first symptoms of heat exhaustion include dry, hot skin that doesn’t sweat, according to Dr. Canterbury, along with a temperature over 104-degrees Fahrenheit. Heat exhaustion can also cause neurological changes, including confusion, delirium, seizures and even coma and death.

Heat stroke vs. heat exhaustion: How to treat

The best way to treat heat exhaustion and heat stroke is to never get it at all. Only work or exercise outdoors when it’s cooler — like in the early morning or later evenings — or take frequent breaks if you can’t avoid the heat.

Staying hydrated with water and other electrolyte-replenishing drinks (like Gatorade) is also important.

“First priority is to remove the person from heat into shade or into air conditioning and get them cooled off,” advises Dr. Canterbury. Remove any excess clothing and spray with water. “Spraying with water uses evaporative cooling, which is best, especially if sprayed with water and placed in front of a fan.” 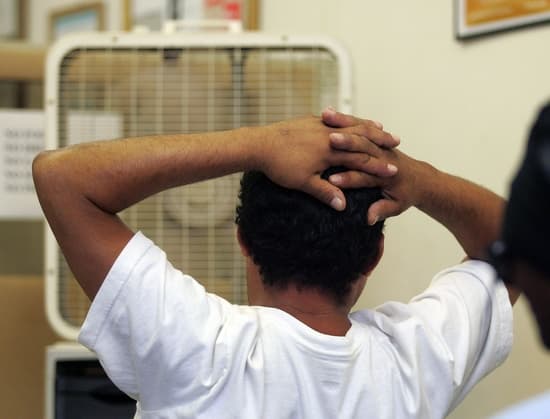 “If a person is only showing signs of mild heat exhaustion, cooling and oral fluids should be enough,” he says.

But if symptoms continue — or get more severe — you should call 911 or get the affected person to the emergency room. “They will need IV fluids, blood tests, possibly other forms of cooling and may need admission to the hospital,” he says.

More importantly, know that heat exhaustion and heat stroke can even affect someone staying indoors without proper ventilation or air conditioning.

“Check in on your neighbors, as the elderly and young are more susceptible to heat injuries such as heat exhaustion and heat stroke,” advises Dr. Canterbury.