Here’s how much marijuana costs in cities across the country There’s a pretty big benefit to making recreational weed legal, and it’s not like your stoner friends will stop talking about the need to legalize it. It’s the new revenue source from marijuana taxes — an untapped stream, many say, turning the already-in-place marijuana market into a social benefit.

But every city’s cannabis economy is different, with varying price points per gram and thus different possible tax benefits.

Seedo, a company that manufactures in-home hydroponic devices, so you can grow your own marijuana (or vegetables) yourself, recently released a report trying to break down what exactly that benefit would be by city.

Called the “2018 Cannabis Price Index” Seedo’s report broke down weed prices in 120 cities around the world, including 13 in the United States, in order to calculate how much tax revue those cities could gain from recreational legalization.

The study looked at cities where marijuana is illegal, legal and partially legal and found the price-per-gram through crowdsourced city-level surveys and data from the United Nations Office on Drugs and Crime’s World Drug Report.

Marijuana is partially legal in all those cities except Boston, where recreational pot is completely legal.

The U.S. city with the cheapest weed, according to this report, is Seattle, where it’s fully legal and costs $7.58 per gram. The cheapest city globally is Quito, Ecuador, where marijuana costs $1.34 per gram and is partially legal.

Seedo also looked at how much cannabis is consumed in these cities. Out of all 120 cities researched, New York came in at number one for the most marijuana consumption, with residents there toking in total 77.44 metric tons per year.

That’s far above the number two spot, which went to Karachi, Pakistan, which has a population of 21.2 million (compared to New York City’s 8.5 million). Marijuana is completely illegal in Karachi, yet that city still consumes 41.95 metric tons annually.

“That illegal cannabis use is so high in countries that still carry the death penalty, such as Pakistan and Egypt, those in power ought to see how desperately new legislation is needed,” said Uri Zeevi, CMO at Seedo, in a statement. “By removing the criminal element from marijuana, governments will then be able to more safely regulate production, take away power from underground gangs, and as we’ve shown in this study, generate huge tax revenues.”

To figure out how much in potential taxes a city could make off of legalizing weed, Seedo looked at the average percentage marijuana is currently taxed in U.S. cities where it’s legalized. (It also calculated another option, as if marijuana were taxed the same as the most popular brand of cigarettes.)

“This study has revealed some incredible insights into the kind of tax revenue that legalizing weed could generate,” Zeevi added.  “Take New York City for instance, which has the highest consumption level in the study at 77.44 metric tons of cannabis per year. If they taxed marijuana at the average U.S. cannabis tax level, the city could make $156.4 million in potential tax revenue per year. This is equivalent to providing nearly 3 months worth of free school meals to every single public school kid in New York City.”

Though Massachusetts officials are still figuring out how much the state will make off of legal weed, this study predicts Boston alone — where residents consume 6.10 metric tons of marijuana annually — could net $12.61 million a year if taxed at the average U.S. rate.

In Philadelphia, residents consume 14.22 metric tons each year, which — if taxed at the U.S. average rate — would bring in $30.16 million annually.

See more findings on the U.S. cities from Seedo’s report below: 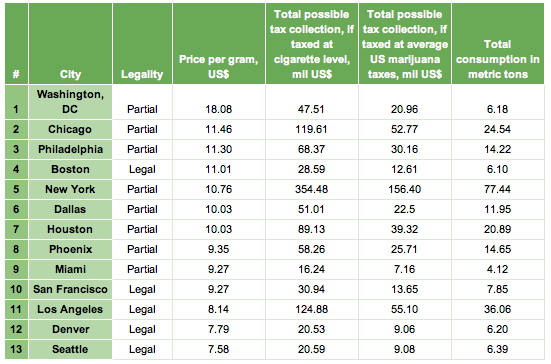