Cocaine actually isn't the most likely to kill you immediately. Photo: Pixabay

In the words of Mr. Mackey on “South Park,” “Drugs are bad, mmmkay,” but when it comes to some of the most popular recreational drugs, it turns out some are worse than others.

Whether or not there’s a safe way to use drugs is up for debate, but the 2017 Global Drug Survey can tell you which drugs are most likely to land you in the emergency room.

It probably won’t surprise most recreational drug users to learn that the drug most likely to send users to the hospital is methamphetamine — 4.8 percent of methamphetamine users sought emergency medical treatment, according to the survey.

What might surprise some is what the Global Drug Survey found to be the safest drug: psilocybin — or what you and your friends probably call “magic mushrooms.”

Dr. Sarah M. Bagley, director of the CATALYST Clinic at Boston Medical Center, which treats teens and young adults struggling with addiction, said it’s hard to say what makes some drugs safer for recreational use.

“I think that this can be complicated,” Bagley said. “The side-effect profile is certainly part of it — people will commonly present to the emergency department after they use drugs that may have more significant side effects.”

After methamphetamine, synthetic cannabis was the most dangerous drug, followed by alcohol, MDMA, amphetamine, cocaine, LSD, cannabis and psilocybin. 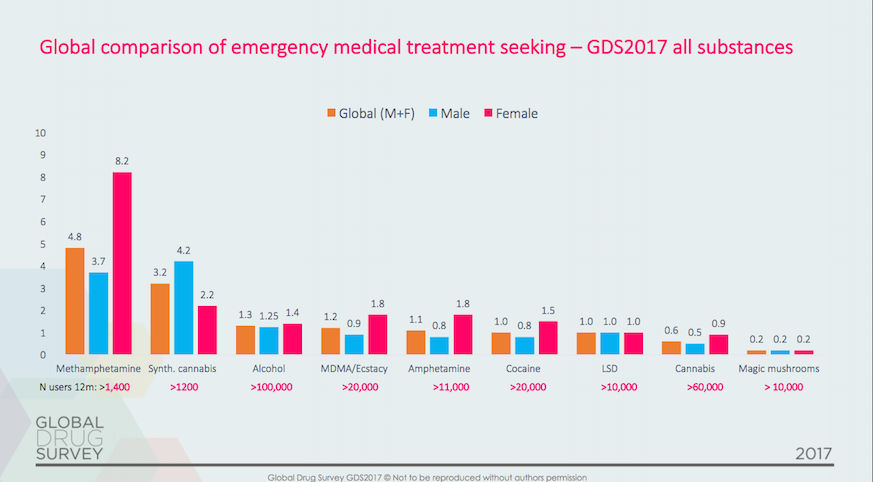 If you want to stay out of the emergency room, magic mushrooms are your safest bet, the survey found.

Just .2 percent of respondents had their mushroom trips end badly enough to land them in the ER, and even if your trip wasn’t all sunshine and rainbows, some studies suggest the lasting impacts of even the most terrifying trips can be positive.

“In a way, it’s not really so surprising,” Griffiths said in a Q&A about the paper. “When we look back on challenging life events we wouldn’t choose, like a bout with a major disease, a harrowing experience while rock climbing, or a painful divorce, sometimes we feel later that the difficult experience made us notably stronger or wiser. We might even come to value what happened.”

Dr. Bagley said it’s important for recreational drug users to understand that there is always a risk when using drugs.

Right now, one of the biggest challenges facing both addicts and recreational users is actually knowing what substance is going in their body.

“Right now, we are in the midst of seeing more people have fatal overdoses and the drug supply being contaminated, meaning that sometimes people may be intending to use one drug and in fact are getting something else,” she said. “To me, it’s then really important that patients understand the risks and have the necessary knowledge to minimize those risks.”